Bilateral and trilateral meetings of leaders invited more attention than the summit speeches. 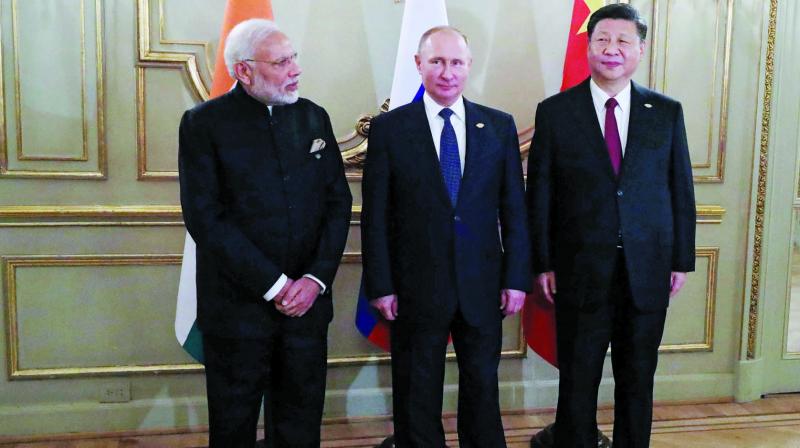 Prime Minister Narendra Modi with Russian President Vladimir Putin and China President Xi Jinping during a meeting in the sidelines of the G20 Summit in Buenos Aires. (Photo: AFP)

Ten years ago, the Group of Twenty, or G-20, was created to coordinate worldwide action to combat the global financial crisis. The old G-7 group of the world’s top industrialised nations created it by inviting the next 12, plus the European Union, constituting 85 per cent of world’s economic output. The just-concluded Buenos Aires summit on November 30-December 1 was held against the backdrop of the simmering tension between many nations over political or economic issues. They issued a Leaders’ Declaration, more declaratory than having concrete points of action.

Bilateral and trilateral meetings of leaders invited more attention than the summit speeches. Saudi Crown Prince Mohammed bin Salman, with the Jamal Khashoggi assassination controversy hovering over his head, offered some distraction over who would or would not greet him. His high-five exchange with Russian President Vladimir Putin caused some merriment as indeed leaks that German Chancellor Angela Merkel, French President Emmanuel Macron and British Prime Minister Theresa May had lectured him. India’s Prime Minister Narendra Modi happily posed with him eyeing prospective Saudi investments in India and the three million-odd Indians working in Saudi Arabia, besides the Indian dependence on oil imports.

India figured in two trilateral sessions. One was with Japan and the United States (US President Donald Trump held no bilateral meeting with India) and another one with Russia and China, maintaining the old grouping RIC. The former was joyfully christened by PM Modi as JAI, explaining it as meaning “victory” in Hindi. Nomenclatures aside, this was continued Indian re-balancing that began earlier this year with Mr Modi’s outreach to Presidents Vladimir Putin and Xi Jinping. Thus, India has one foot in each boat, which will have clear strategic divergences. JAI sought a “free, open, inclusive and rules-based” order in the Indo-Pacific region, which indirectly berates Chinese muscling of its neighbours in the South China Sea and the purloining of open seas within their fictional nine-dash line, including the fortification of islands created in breach of the UN Convention on the Law of the Sea (UNCLOS). Two other trilateral meetings were between the US, Canada and Mexico to sign USMCA (US, Canada, Mexico Agreemen
t) to replace the old North America Free Trade Agreement (Nafta); and between the foreign ministers of the European Union, UN Secretary-General and China’s President Xi.

The Trump-Xi interaction and the cancellation of the planned Trump-Putin meeting drew global attention. Russia’s forcible seizure of three Ukrainian vessels entering the Sea of Azov, taken as a freedom of navigation zone, and the indictment of former Trump lawyer Paul Manafort forced the US President’s hand. The US-China meeting had implications for global trade as the two largest economic powers, having imposed tit-for-tat tariffs, sat down for what the two leaders later called a “highly successful meeting”. The United States postponed tariff hikes on $250 million Chinese products from 10 per cent to 25 per cent planned January 1 as China agreed to buy a substantial amount of agricultural, industrial and energy products and agreed, with a 90-day deadline, as well as to “immediately begin negotiations on structural changes with respect to forced technology transfer, intellectual property protection, non-tariff barriers, cyber intrusion and cyber theft”. China also endorsed the Qualcom-NXP deal, which plans to merge the US-owned world’s biggest chipmaker and its Dutch rival. China also designated Fentanyl, a precursor for drug production, as a controlled substance. This is far from a deal, as outcome is contingent on negotiation results, but President Trump got some “wins”.

The G-20 Declaration focuses on four themes — the future of work, infrastructure for development, a sustainable food future and gender mainstreaming. Each rests on recognising that “strong global economic growth” has been increasingly “less synchronised” between nations and “transformative technologies” present risks and opportunities. Nations need to train, educate and improve skills for “inclusive, fair and sustainable Future of Work”. Describing education as a basic human right, the leaders seek coordination between employment and quality education policies. Linked to this is the recognition that digitalisation and emerging technologies should promote micro, small and medium enterprises.

These are pious sentiments, unlikely to change the trajectory of developed powers, particularly the United States, as they confront the challenge posed by China announcing in 2014 a $150 billion investment fund to improve its domestic industry under the rubric “Made in China 2025”. Former US President Barak Obama recognised this in 2015 when he barred Intel’s sale of advanced chips to China. Moore’s Law dictates that the capacity of chips doubles every two years. In this race, China can be delayed but not stopped from rivalling US and Western prowess.

That leaves India, as was obvious at G-20, on the margins of the global redistribution of economic and technological power. It was said that the Indian Prime Minister sought a mechanism for the expeditious transfer of fugitives to combat corruption and economic crimes. The declaration calls for criminalisation of the bribery of foreign public officials but adds that the return of persons sought for such offences and stolen assets was possible only when “consistent with international obligations and domestic legal systems”. That isn’t different from the situation now. India needs better crime prevention and investigation to succeed in extraditing fugitives.

On climate change, the differences were apparent as the US view is in a separate paragraph, while the signatories to the Paris Agreement re-emphasised that a strong economy and “healthy planet” are mutually reinforcing. But Trumpian exceptionalism and the endorsement of fossil-fuel lobbies weakens the fight that may leave poorer countries the worst affected. The winter smog in North India is an annual occasion for self-flagellation. But where the Narendra Modi government has failed is to position India at the forefront of finding cost-effective solutions to these problems, other than advancing solar energy use.

Jawaharlal Nehru, India’s first Prime Minister who is now reviled by the neo right-wing, paid obeisance at the “temples of modern science and industry”. Regrettably, our national discourse has been diverted to building actual temples and statues. The real question is whether India, when it hosts the G-20 in 2022 coinciding with 75 years of Independence, return to that scientific temper and existential issues?