There has been worldwide condemnation for anti-Semitism officially and in the media, but our disinterest disturbs me for two reasons 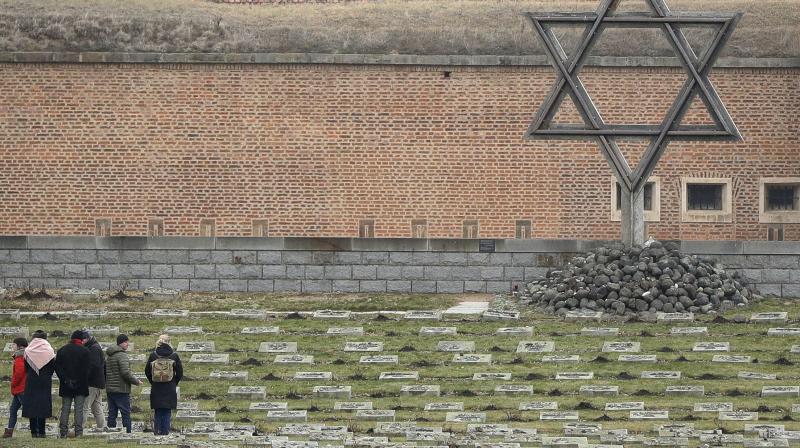 In this Thursday Jan. 24, 2019 file photo visitors walk through the cemetery of the former Nazi concentration camp in Terezin, Czech Republic. AP Photo

When did you last see a sensible, expert discussion in the media about, say, Afghan peace, Nepal’s India problems, or the comical US private army’s Venezuela invasion?

Surely raw, naked, worship of Nazism in the Croat cathedral in Sarajevo, the scene of genocide by Nazi collaborators during World War II, is no negligible matter. Now NDTV has given a prime-time slot to the BBC, we must expect these stories to be covered

There has been worldwide condemnation for anti-Semitism officially and in the media, but our disinterest disturbs me for two reasons: tolerance for fascism anywhere will, over time, spur majoritarianism here.

The second reason is that it brought back memories of the horror carried out by Serbs and Croats on Bosnians. I saw it from all angles -- Zagreb, Sarajevo, Mostar and Pristina, Kosovo’s capital. I visited Belgrade later, after the 72-day Nato bombing of Serbia pulverised Slobodan Milosevic and created an independent Kosovo.

It is an unusual country in several ways. It’s the only Muslim country with an avenue named after a US President, Bill Clinton. It was in the Clinton period that the bombing of Serbia eased Milosevic’s stranglehold on Kosovo.

Before US intervention, Pristina was an apartheid city. A school had a wall separating the well-furnished Serbian section from the run-down Kosovar-Albanian part. The solitary telephone is in the Serb principal’s office. The Albanian vice-principal had no phone. The contrast is like travelling from Israel to Gaza.

President Clinton bombed Serbia to stop Milosevic ethnically cleansing the Muslim population from Kosovo. The irony is that Kosovo is at the centre of Serbian religious and historical lore.

Little wonder the Serbs held onto the 200,000-strong Serb enclave of Mitrovica, abutting Serbia. When the US was creating an independent Kosovo, why did they leave the Mitrovica enclave in Serb control even though it was a part of Kosovo?

There are so many monasteries and monuments holy to Serbs that it’s impossible for them to wrench themselves emotionally from Kosovo, a Muslim majority state and historically their holy land.

Serbs anchor their nationhood to the monument outside Pristina, which reminds them of the Battle of Kosovo (1389) a battle they celebrate even though they lost it to Turks. They see it as a moment of martyrdom: by their fierce fighting they blocked the Turkish advance towards Europe.

It’s a Serbian belief that the world’s best wine is distilled by monks of the great 14th century Serbo-Byzantine monastery in Decan, near Pristina. How precariously Orthodox-Turks are poised is symbolised by a regular ritual: at dusk daily, a young priest circles the church vigorously, rotating a giant wooden rattle, a warning for the inmates to remain alert against the Turks. This being the state of play between the two faiths, does the world community envisage a permanent role for the Nato-led Kosovo peacekeeping force?

So proud was secretary of state Madeline Albright of the US intervention in Kosovo that she asked her policy planning chief, Morton Halperine, to initiate “A History of Kosovo Project”. Prof. Richard Ullman of Princeton University, former editor of Foreign Policy, led a high-powered team on the subject, but I wonder what happened to the study.

Let’s now revert to the Croat Church’s misdemeanour in Bosnia, the starting point of the story. No sooner did I reach Zagreb than I found my way to the office of Cardinal Kucharij at the cathedral. I was met by Father Juraj Jezerinac who, after pouring out a shot of cherry brandy, became a willing source for stories.

First, he confirmed that Cardinal Kucharij, after visiting the Vatican, had got the Pope’s consent to recognise Croatia as soon as Yugoslavia began to break up. The EU, which came into being to keep intra-Europe peace, was keen for coordinated action on Yugoslavia.

But a secret nod from the Vatican was a signal German foreign minister Hans-Dietrich Genscher didn’t fail to pick up. Germany’s recognition of Croatia, ahead of other Europeans, set the cat among the pigeons. An imaginary Axis-Allies line began to surface. The brutalisation of Bosnian Muslims didn’t ruffle London, Paris or New Delhi. No one in New Delhi even took note that Lt. Gen. Satish Nambiar was abruptly replaced from the UN force in Bosnia by European officers as soon as Britain and France began to throw their lot behind the Serbs. The observation by a senior IFS officer in Paris will stay indelibly etched on my mind: “The balance of power shifted away from Christians in Lebanon; it is shifting away from Muslims in Bosnia.”

The four-year Sarajevo siege was of no interest to my friend in Paris. It also disturbed nobody’s equanimity at South Block. Whatever the Serbs did in Kosovo or Bosnia was of no consequence. The logic advanced was that New Delhi’s relations with the former Yugoslavia were in the context of the nonaligned movement: New Delhi saw Serbia and Belgrade as inheritors of that legacy.

The editorial staff Oslobodenje showed the kind of heroism impossible to come by in the annals of journalism. I met editor Kemal Kurspahic at the last NAM summit in Belgrade attended by Rajiv Gandhi in 1989. His office in Sarajevo was now in a nearly inaccessible basement enclosed on three sides by the rubble of bombed-out structures. “How did you bring out the paper every afternoon in a war zone?” He pointed upstairs. “God.” I asked: “Who financed you?” He fixed me in a gaze. “George Soros.”