The BJP’s acts of moral policing, whether of food, dress or sexuality, or even movies, has been a source of deep concern. 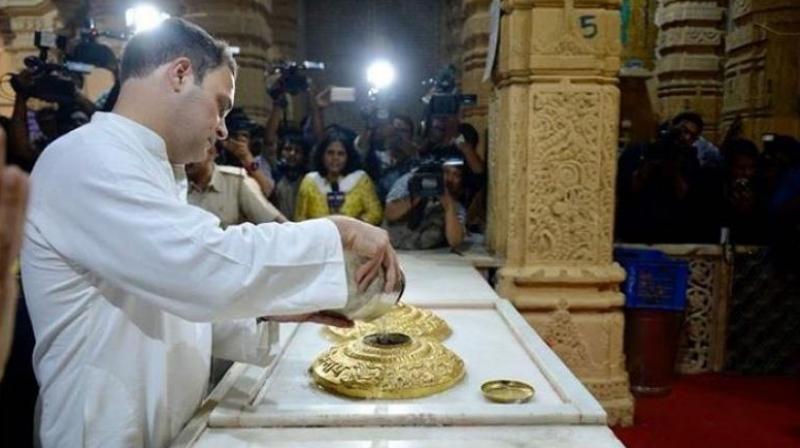 Rahul Gandhi was paying a visit to the temple ahead of a two-day campaign in the state and is expected to address multiple rallies. (Photo: Twitter/@INCGujarat)

Democracy has been celebrated as a noisy and raucous affair, a ritual of give-and-take between opposing groups. But people who celebrate its sense of the carnival often forget that behind the debate, the fight for power is a consensus, a framework for values and even a way of life. Democracy allows for dissent, debate, divergence, and such rituals anchor the normative world of politics. The rules of the game are clear and any violation threatens this world.

Watching the Gujarat elections, one has been deeply distressed by the behaviour of the BJP. The party is clear that as a majoritarian effort, instilling fear can be part of its repertoire. The BJP’s acts of moral policing, whether of food, dress or sexuality, or even movies, has been a source of deep concern. The pity is that few see the connection between these domains, or even realise how freedom, creativity and the pluralism of culture has been vitiated by the combine of the VHP, RSS and BJP. It is precisely these acts of cultural terrorism, presented as occasional eruptions by the media, that set the tone for the Gujarat elections.

Two events in Gujarat polls disturbed the aesthetics of elections. First came the Macwan affair and second the handling of Congress leader Rahul Gandhi’s visit to the Somnath Temple. There was a crudity of attitudes and language which made one worry about the civility of politics. I admit this is an old-fashioned concern, but democracy, I feel, is kept alive by a lot of old-fashioned people.

The facts of the Macwan episode are as follows: Archbishop Macwan, in a letter to his flock, as part of his pastoral duties, asked them to vote for leaders with humane values. He criticised current trends in national politics, where majoritarianism as a ritual of bullying was masquerading as nationalism. Archbishop Macwan’s act of citizenship was seen as intrusive. What was, in particular, distressing was Prime Minister Narendra Modi’s reaction. Mr Modi reacted as a BJP candidate, a parochial campaigner, not as a PM seeking the broader unity that makes a nation.

There was both threat and hypocrisy in Mr Modi’s address. We expect a mature reaction from a Prime Minister. But Mr Modi’s almost wilful reading of Rev. Macwan’s appeal is worrying. For a man who spends his time hobnobbing with spiritual gurus, aware as he is about their electoral impact, Mr Modi’s comments were unfair. He accused the archbishop of attacking rashtrapremis. The implication, by default or insinuation, is that Rev. Macwan is anti-national, a word encompassing all that the BJP hates. Mr Modi claims to be uniting the country and cites India’s efforts to rescue citizens, including Christians, from strife-torn countries. His parochialism is clear.

One can understand BJP chief Amit Shah making a statement like this. But to have the Prime Minister play a bully boy is a bit worrying. He hides behind the office of Prime Minister to make scurrilous statements and one wonders whether Twitter is just a way for Mr Modi to dump his irrationalities on people. We do not associate this sort of behaviour with our leaders.

The exclusionary nature of Mr Modi’s majoritarianism is apparent in the second incident. When Mr Gandhi visited the Somnath Temple and signed himself in as “non-Hindu”, the hysteria that followed was unbelievable. It is as if the confession of being a non-Hindu makes him ineligible to be Indian. The word “non-Hindu” becomes a dustbin category where the diversity of India is ruthlessly erased. It is as if a non-Hindu becomes non-Indian and gradually anti-Indian. It is as if the Hindutva majority now defines what is Indian; that the Constitution is of little significance. Predictably, this is precisely what Archbishop Macwan was warning against, that we have created a majoritaraian “Dracula” which is, in essence, anti-national and anti-constitutional. Religion becomes the primary identity and citizenship is almost inconsequential.

It is a pity that the Congress’ response to the change was more an act of saving face. Its inanity is appalling as all that the party did was to display a picture of Mr Gandhi wearing the janeyu, the sacred thread Hindu Brahmins wear. It becomes a spectacle of exclusivities, with Mr Modi excluding non-Hindus and Mr Gandhi parading his Brahminism. As a national leader, he should have given Mr Modi a lesson in the civics of nationalism. Instead, he is gripped in an identity crisis and shows his Brahmin Aadhaar card.

The tragedy of the Gujarat elections is the tragedy of the parochial idea of citizenship. Citizenship, instead of appealing to a commons, insists on being a club. Surveillance, rather than hospitality and transparency, is thus becoming the hallmark of India as a nation.

Sadly, few people are standing up for Archbishop Macwan. Worse still is the fact that few have the courage to question the Prime Minister as he plays party boss, and issues what are his fatwas, pretending that they are constitutional edicts. Watching his performance, Mahatma Gandhi and Baba Ambedkar would be distraught and Sardar Vallabhbhai Patel might well prefer Hardik Patel to Mr Modi. There is a crudity, a brutality and a hypocrisy the nation is being evasive about, pretending that the fact of elections is more important than the content and the manner in which it is conducted.

I admit that dissent and critique today is a marginal exercise. But as a marginal dissenter and a proud citizen, I must register that crudity and the sense of insult conveyed to citizenship by the BJP leaders. To do any less would be to run away from citizenship and insult the very premise of democracy.