Stupidity, the Indian weapon against C-virus

Mayank Tewari
Mayank Tewari is the writer of Newton, Accidental Prime Minister, and Bard of Blood

Stupidity, the Indian weapon against C-virus 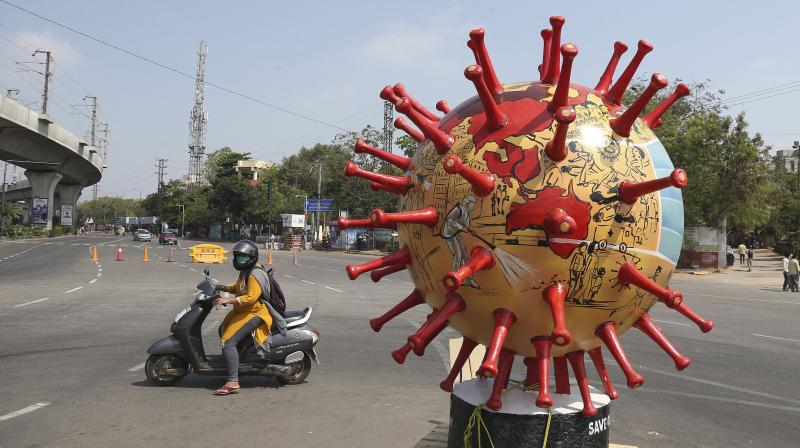 The pandemic has finally found its unique Indian flavour. (AP)

Indians are known to make everything their own. When we encounter anything alien or foreign, we act upon it, or react to it, in such a unique yet Indian way that what is left of the object or the concept following our tryst with it is neither here or there, and the universe has no option but to accept it as uniquely Indian. A moment from the film Dilwale Dulhaniya Le Jayenge comes to mind. At one point in the film, Satish Shah's character says to Shah Rukh Khan's: "You are not genius, you are indigenous."

When the pandemic fist erupted, I sensed an anxiety not just in the mind but also among a section of the people I follow on Twitter. Every time I read the hashtag “chinesevirus”, I knew there was something more to it than an accounts graduate sharpening his or her epidemiological skills. But what it was I could not tell. Then when the prime minister gave the nation his first task, of banging plates, I immediately realised what he was trying to do: he was giving the pandemic a unique Indian flavour. The jarring noise that erupts when steel strikes steel did not stop people from dancing, and watching the garba on the streets of Gujarat over the noise and chants of “go corona go”, I wondered if the pandemic had finally found its unique Indian flavour.

I was wrong. There are two important reasons for it. First, a national flavour cannot come from the top. It can be endorsed by the top, overtly or covertly, but it cannot be imposed. Second, and most importantly, something inherently negative cannot be given a positive meaning. If we have to make pizza Indian, we have to make an Indian Pizza. We must match disease with disease. Finally, when the Nizamuddin incident involving Muslims infected with coronavirus was reported, I knew we had had our moment. Now, even if we don’t make an Indian vaccine to the virus, history will remember us as having matched disease with disease, giving historians no option but to mention the incidence of the spread in our country in a separate paragraph. The genius or the indigenous is hard to miss. Only in India can science be upturned by social science. And why not. Just because they did not opt for science in high school should be no reason for anyone to not be able to opine on the global pandemic.

As I write, hundreds of residential buildings and colonies across the country have explicitly banned the entry of Muslim vegetable vendors. The logic isn’t just bigoted and hate-filled but also uniquely scientific and a brilliant exemplification of the creative Indian upper caste mind. There is a likelihood, I am told, of the vendor having spat on the vegetables before selling them. When I respond with the fact that the reports in the media about Muslim patients spitting at doctors was fake, I am confronted by a perversion of logical thought that can only erupt on Indian soil: yes, but we can’t take the chance. Just because they did not spit on the doctors then, doesn’t mean they won’t spit on the vegetables! Can anyone argue with this? I know I can’t.

The Muslim spit containing Islamic microbes has been an important part of Indian communal epidemiology. As long as I can recall, I have heard horror stories about Muslim saliva. The logic was first explained to me by a relative with (Indian) scientific temper when I was five years old. Spitting in the water they serve you is the first step towards making you Muslim. With their saliva in your system your resistance to conversion will be less. The more you go to their houses and drink water, the more Muslim saliva your system gets overtime, the more likely you are to become Muslim. The laughter that erupts when I think of this, makes me sick to the pit of my gut. Try as I might, I cannot get myself to not react any other way.

The modern Indian mind is marked by a remarkable will to stupidity, and unfortunately, try as one might, one can’t take on stupidity with logic. It simply doesn’t work that way. To be sure, ignorance isn’t stupidity. It is what it is: a lack of knowledge. No matter how ignorant a people are, you don’t call them stupid. Stupidity, especially of the sort I encounter on a daily basis, is deliberate, and perhaps logical. There is a reason it exists in the collective consciousness of this country. This stupidity masks fear and anxiety. If the Hindu isn’t united against the Muslim, the Hindu will be forced to look within and discover the inequities in the community. Beyond the Hindu-Muslim divide is the terrible and inhuman caste divide. It is deep, all pervasive, and no matter how hard we try it cannot be dealt with by a process of reform. Beyond the veil of stupidity is the fear of annihilation of the Hindu as the Hindu has learnt to know itself through the millennia. The upper caste Indian establishment needs to perpetuate this form of stupidity simply in order to survive. That’s the logic of our stupidity and once again, it is uniquely Indian.