The Afghan imbroglio draws Pakistan into a growing dissonance, if not confrontation, with the United States. 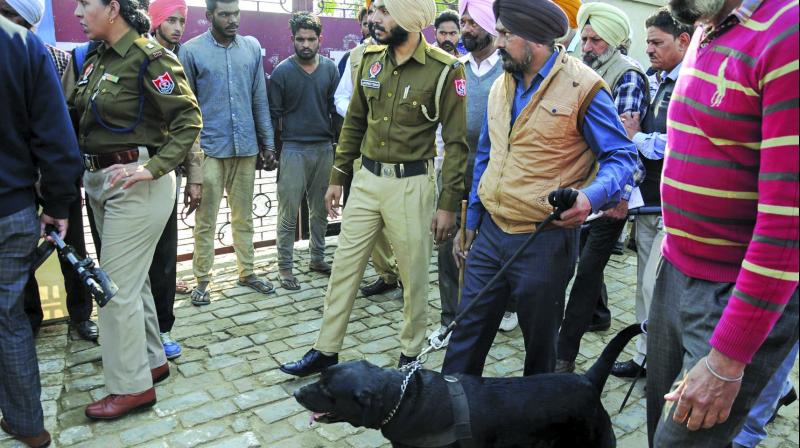 Police personnel inspect the site of a blast at the Nirankari Bhavan in Adliwal village near Amritsar. (Photo: PTI)

The grenade attack on the Nirankari Bhavan in Punjab’s Adliwal village in Amritsar district has unleashed war of words between all political parties. The Akali Dal, beleaguered after its leadership’s indictment by the Justice Ranjit Singh Commission over the 2015 desecration of the Guru Granth Sahib, has lashed out at the so-called failure of the chief minister, Capt. Amarinder Singh, to maintain the peace. Aam Aadmi Party leader H.S. Phoolka has lunged at Army Chief Gen. Bipin Rawat and then retracted his remarks. The Punjab police was quick to see a “Pakistani hand” as the grenade in question was of Pakistani origin. Leaks from New Delhi claimed that there was the hand of a Burhani Wani clone called Zakir Musa, a former student of engineering at Mohali in Punjab and a rising force in the Kashmir militant hierarchy. A car hijacked in Punjab, a reminder of similar hijackings by Pakistani jihadis before the Pathankot airbase attack, raised similar concerns.

The evolving geopolitics of the region and beyond needs a closer look to understand the issue better. Several commentators have correctly pointed out that comparing this to the 1978 Amritsar clash between the Nirankaris and the protesting Sikhs, which Jarnail Singh Bhindranwale used to seize the militants’ leadership and capture Sikh minds, would be incorrect. But it would not be wrong to surmise that the Pakistan Army has been attempting for some time to stir militancy in Punjab when the Kashmir Valley remains sullen and disturbed, as they did in the 1980s. The only difference is that the Punjab card was then played first as they wanted to ensure that India did not utilise the Pakistani preoccupation with the Afghan jihad together with the (then) Soviet Union. No India-Pakistan war could be fought with Punjab in turmoil and it also tied down the security forces, thus leaving Kashmir open to Pakistani exploitation. The common feature is that as in the late 1980s, particularly after the rigged 1987 Kashmir elections when surplus fighters returning victorious from Afghanistan after the Soviet troop withdrawal needed work, and Pakistan again has to keep its Punjabi jihadi elements preoccupied with Kashmir while it sorts out the endgame in Afghanistan.

The Afghan imbroglio draws Pakistan into a growing dissonance, if not confrontation, with the United States. Its latest manifestation are the tweets by US President Donald Trump, and strong counter-tweets by Pakistan’s Prime Minister Imran Khan. Starting with the delay in capturing Osama bin Laden, for which predictably Mr Trump blames President Bill Clinton, he asserts that the US will “no longer pay Pakistan the $Billions because they would take our money and do nothing for us, Bin Laden being a prime example, Afghanistan being another”. He concludes, in capital letters, “That’s ENDING”. Imran Khan, not one to duck pace bowling, tried to set the record straight in a strong rebuttal. No Pakistani, he declared, had been involved in the 9/11 attack on America, but still Pakistan had participated in the US “war on terror”. He forgets that in fact $100,000 was wired from Pakistan for the operation by none other than Omar Sheikh, released by India at Kandahar after the Indian Airlines plane hijacking, clearly aided, if not abetted, by Pakistan’s Inter-Services Intelligence.

Imran Khan then reverts to the usual Islamabad reasoning that Pakistanis are the victims of terror, suffering 75,000 casualties, with the country’s economy taking a $123 billion hit. Again, this is less fact and more fiction. Pakistan, including the nation’s top military brass, hugely benefited from the trillion-dollar expenditure by the US Army on its Afghan operations. Pakistan got American equipment, billions in compensation for their coalition support operations and uncounted indirect money ploughed into their economy by the US utilising the transit route via Karachi. Imran Khan then bemoans, correctly, that their “tribal areas were devastated and millions of ppl (people) uprooted from their homes”. But again, he dodges Pakistan’s own responsibility in a part of the Taliban, rechristened Tehrike Taliban Pakistan (TTP), turning against them due to their collaboration with the US in taking selective action against only those Pashtun groups not fully aligned with them.

Finally, Imran Khan argues: “Instead of making Pakistan a scapegoat for their failures, the US should do a serious assessment of why, despite 140,000 Nato troops plus 250,000 Afghan troops & reportedly $1 trillion spent on the war in Afghanistan, the Taliban today are stronger than before”. Interestingly the Urdu version, instead of “scapegoat”, uses the more colourful “sprinkling salt on wounds”.

Punjab is caught in the middle of this churn, as it was in the 1980s. Bhindranwale’s rise owed to the Sikh alienation from the Centre and the collapse of the traditional clergy’s influence as indeed the weakening of the Akali Dal. What the Narendra Modi government has not realised over the last four years is that the Akali Dal has now been reduced to merely the Badal Family Dal, and used to perpetuate power, being far removed from traditional Akali politics. Additionally, the Badals have established their complete dominance over the Shiromani Gurdwara Parbandhak Committee (SGPC), putting pliable individuals in positions of clerical influence. The Bargari agitation is a manifestation of this malaise. The correct parallel with the 1978 incident would be the Bargari police firing on protesting Sikhs, and not the latest attack. By retaining its political links with the Akali Dal, and keeping Mr Parkash Singh Badal’s daughter-in-law in the Union council of ministers, the BJP is now making the same mistake that Indira Gandhi did by persisting with Darbara Singh as Punjab chief minister.

George Santayana’s advice that those who cannot remember the past are condemned to repeat it sounds ominous for Punjab today. The external environment is as challenging as in the 1980s, Pakistan as cornered and India, by not talking to it, appears as cussed as Indira Gandhi appeared to Pakistan after her return to power in 1980. It is high time that Prime Minister Narendra Modi rose above political opportunism to seek mature advice and handle Punjab with wisdom.