State lockdown option is the need of the hour 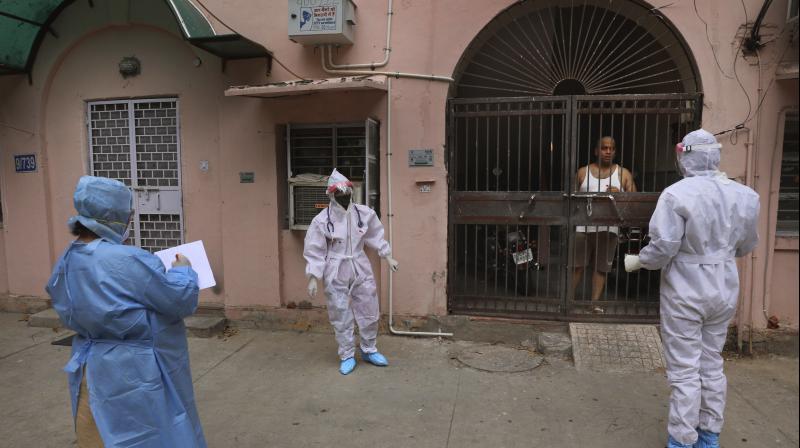 Health workers collect details as they survey a neighborhood amid concerns over the spread of new coronavirus in New Delhi, India. AP Photo

Prime Minister Narendra Modi is meeting chief ministers of all states through videoconferencing on Monday, for the third time after he declared a national lockdown on March 24 to contain the spread of pandemic Covid-19. The meeting comes amid demands from several states for a second extension of the debilitating but unavoidable measure, due to end on May 3, to save the nation from coronavirus. Some states have already declared that they have no immediate plans for lifting the lockdown even though the Union government on Saturday announced a series of measures easing the strict norms, thus offering some relief to the people.

The corona containment measures should ideally be conceived and coordinated by the Union government and implemented by states. This should have ensured optimal utlisation of resources, timely help from the scientific community and identification of successful practices in one place and their cooption in others. Experts agree that the lockdown has stopped the matter from going out of control but there are doubts if the results matched the sufferings of the people. Unfortunately, we failed to see a coordinated effort, and such a result. A glaring example is the failure of the government of Rajasthan, and others, in taking a leaf out of the successful Bhilwara experiment, which entailed aggressive contact tracing, testing and quarantine of all the people who would be a potential Covid patient. It defies logic that the model has not been taken up in other hotspots, even in Rajasthan. A close monitoring by the Centre would have resulted in better outcomes.

Another point of concern is the plight of the millions of daily wage workers and migrant labour who were caught off guard by the Prime Minister’s sudden announcement of the lockdown. Struck by the decision of the government to close all their lifelines, lakhs of migrant labourers chose to trek back to their homes, thousands of miles away. The Centre indeed made an attempt to serve them by offering grains and pulses but we have reports that only a fraction of the intended people got a chance to avail it. The micro- and small-sector industries face a near-death phenomenon with the economy coming to a complete standstill and both their suppliers and customers having no immediate plans of reopening anytime soon. This will further choke the economy.

A decision to extend the lockdown beyond 40 days should, therefore, come with a proper, well-laid out, workable and measurable plan with properly marked milestones. It should jot down the role the Union and state governments would play. There must be a proper understanding of the position of each of the states, and the option to declare a state or regional lockdown. Instead of looking over their shoulders using inter-ministerial central teams, the Union government must financially and operationally empower the states. It should come out with white papers on the Covid fight and the status of the economy. Packages for the states and the industry are long overdue. An automatic extension of the lockdown without proper plans would be counterproductive, raising fears of more deaths by hunger than by the virus.