We need maturity over foreign aid in disasters

The Union government must display alacrity and large-heartedness in putting Kerala back on its feet. 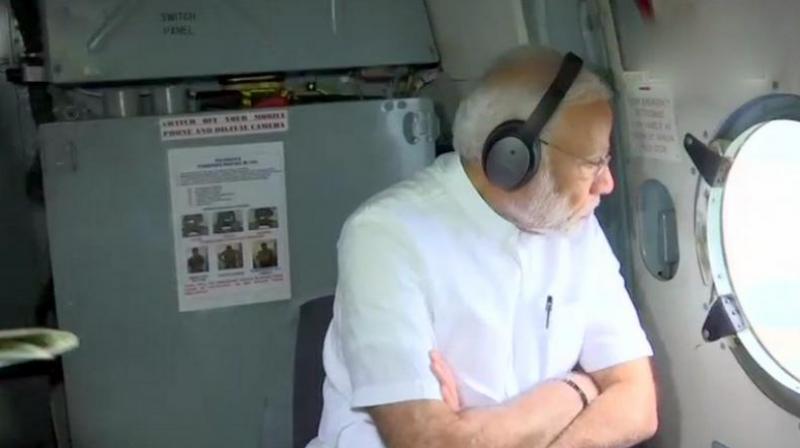 The unprecedented monsoon deluge in Kerala earlier this month has triggered a colossal tragedy. Fortunately, the combined efforts of the local civil authorities, the armed forces and other agencies have minimised the loss of life. The sheer size of the population displaced and the damage caused or loss of property leaves the extent of resources that is needed to rehabilitate, clean up, rebuild and compensate undetermined. The Central government had initially, after Prime Minister Narendra Modi’s aerial survey and visit to the state, allocated Rs 600 crores, against the state government demanding Rs 20,000 crores. Logically, more funds should be allocated as the gap between state’s resources and the rehabilitation needs becomes clear.

However, a controversy arose over the purported offer by the United Arab Emirates of Rs 700 crores, in recognition of the immense Malayalee contribution, since the 1970s, to their nation’s development. Malayalees are in any case predominant among the Emirati expatriate community. The Narendra Modi government promptly turned down that offer, pleading an old policy decision by the Manmohan Singh government dating back to the 2004 tsunami crisis, to eschew foreign assistance after natural or manmade disasters. What perhaps irked the Modi government was that the amount exceeded its initial grant, thus creating poor optics. Since then, arguments have been made both for and against the decision, leading to the UAE defensibly announcing that in fact it had not taken any final decision and that before taking one, it would consult the Indian government. Kerala’s chief minister Pinarayi Vijayan, however, unwilling to drop the issue, argued that he had learnt about the offer from a prominent Malayalee “billionaire” based in Abu Dhabi, who claims proximity to the Al Nahyan ruling family.

The Modi government had announced a National Disaster Management Plan (NDMP) in May 2016. In the introduction, Prime Minister Modi noted that it incorporates “global trends in disaster management”. In its Chapter 9 and sub-head 9.2, international assistance is discussed. It specifies that while the government will not issue appeals, it may accept voluntary offers “as a goodwill gesture in solidarity with the disaster victims”. The home ministry has to coordinate with the external affairs ministry in this regard. Why then was the UAE’s offer so summarily spurned?

By way of background, even the United States’ policy on accepting foreign assistance for cataclysmic disasters is a work in progress. Both during the 2005 Hurricane Katrina devastation of New Orleans town and its vicinity and the 2010 BP oil spill in the Gulf of Mexico region, offers of foreign help were only selectively accepted. For instance, offers from Cuba were rejected out of hand, as India should do with any offer from the Maldives, considering its diplomatic pinpricking of India. Equipment in short supply domestically, like machinery for oil removal from water, was immediately accepted. In retrospect, the US determined that some of the material sent by other countries was either unusable — such as electronic equipment on 220 volts, when the US uses 110 volts — or was not in conformity with US health or safety standards. Thus, for the future, the US has decided to encourage cash donations and not materials.

Thus, India too must, in line with its NDMP, devise practical guidelines about the terms and conditions for accepting foreign assistance, instead of lapsing into an automatic nationalistic mode that India is self-sufficient and capable of handling any emergency. For instance, a lot would depend on the nature of the disaster and the kinds of equipment or specialised skills needed for immediate relief and rescue. Thereafter, a quick assessment by the National Disaster Management Authority should be undertaken to assess the extent of relief, rehabilitation and reconstruction required. That should enable a fair calculation of what, if any, foreign assistance is required.

The first lesson to be learnt from the public relations disaster over the UAE offer is that all foreign aid offers need to be urgently jointly reviewed by the ministries of external affairs and home and the Prime Minister’s Office. For instance, any offer from a Gulf state should take into account the paradoxical image of India among the local population in those countries. The older generation, having seen days of economic want before the oil-led prosperity, still regard India with respect. For the younger generation, India is seen as a country that provides cooks, drivers, maids and white-collar workers, and thus a degree of condescension colours their perception. Their elite, particularly the ruling families, on the other hand, are mindful of the increasing geo-economic and geostrategic role of a rising India in the 21st century world. Thus, a huge grant from a Gulf ruling family must be accepted taking into account its likely impact on the Indian image in that nation. It would also not be desirable that even in Kerala and among the Malayalee diaspora the impression gathers that a Gulf prince is more munificent and mindful of their welfare than their own government in New Delhi.

Although some bruised royal Emirati egos are inevitable, the UAE must also realise that inter-state relations cannot be conducted on the advice of and through some Indians hovering around their majlises, however rich and savvy. Finally, such offers must be insulated from domestic Indian politics and are best handled through diplomatic channels. The Union government must also realise its image problem — as it is seen as inimical to state governments which are not led by their allies. Kerala particularly has been a battleground due to the BJP’s desire to penetrate a state with a unique balance of population belonging to Hinduism, Christianity or Islam. This is certainly not the time for politics or a blame game as people need help to rebuild their lives. The Union government must display alacrity and large-heartedness in putting Kerala back on its feet. That, and not bickering with the UAE or other nations, or with the state government, will earn it Malayalee goodwill.