Kashmir: A temporary respite from meddling

Clearly, India had to announce a roadmap for addressing America’s trade-related concerns. 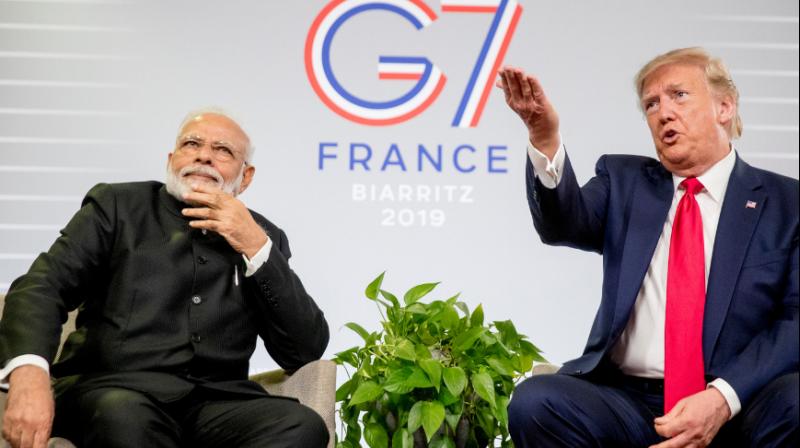 The Indian strategy appears to have been to finesse the Kashmir issue in an off-the-record dinner interaction between President Trump and Prime Minister Modi. At their formal meeting the next day the focus remained on two issues that matter to the United States —trade and defence cooperation and deals. (Photo: PTI)

The overall expectations from the Group of Seven’s summit at Biarritz, France, were low due to both fears of disruption by US President Donald Trump, as happened at the last summit in Canada, and differences within the group over trade, climate change, digital tax, Iran and Russia. However, as the rest of the world worried about this dissonance in a small group of key global economies, India focussed on Mr Trump’s meegting “on the sidelines” of the summit with Prime Minister Narendra Modi. The issue of concern was the repeated messaging by Mr Trump that he had been asked to or was ready to “mediate” between India and Pakistan over Kashmir.

The Indian strategy appears to have been to finesse the Kashmir issue in an off-the-record dinner interaction between President Trump and Prime Minister Modi. At their formal meeting the next day the focus remained on two issues that matter to the United States —trade and defence cooperation and deals. The Kashmir issue, as spelt our by Mr Trump, was discussed at great length and the conclusion was that India and Pakistan were to resolve it by themselves. However, President Trump also noted that he was told by Mr Modi that India had the situation “under control”, and that India did “speak with Pakistan”, and thus the two neighbours can “do something that will be very good”. The conclusion that can be drawn from this is not that the US has now outsourced Kashmir handling to the leaders of India and Pakistan, but that for the time being the US will allow India space to restore normality in the Valley and lower tensions with Pakistan. Considering that three weeks into the clampdown there is still little evidence of any meaningful relaxation and Pakistan’s Prime Minister Imran Khan has kept up his anti-India tirade, at best the Indian government has bought some temporary respite from international scrutiny.

Clearly, India had to announce a roadmap for addressing America’s trade-related concerns. The announcement that Mr Modi would swing by Houston during his visit to the US next month to attend the UN General Assembly session, to engage top energy honchos for greater oil and LNG imports from the US to balance trade, would have pleased Mr Trump, who volunteered to send top energy officials to join the meeting. It was also announced that Piyush Goyal, the commerce minister, would meet his US counterpart Robert Lighthizer to resolve other major trade-related issues before the next encounter between the two top leaders on the sidelines of the UN General Assembly in September. But India needs to recognise that Mr Trump can blow hot and cold depending on his perception of whether matters are working in his favour or not. When asked in France about his unpredictability on China, condemning them one day and praising President Xi Jinping the next, he simply replied: “That’s the way I negotiate”. Therefore, satisfying him on trade issues appears critical to keeping him from using the “M” word again, as the mediation offer allows him to appease Pakistan and rile India enough to make it urgently rush to address his other demands.

The show at G-7 was stolen by French President Emmanuel Macron who surprised everyone by inviting Javed Zarif, the Iranian foreign minister, who is under US sanctions himself, to the sidelines of the summit. It turned out that the “French initiative” was carefully calibrated by preparing Mr Trump for it at an unscheduled Macron-Trump lunch. Some details came out at a long joint press conference of the two leaders, where the G-7 baton was passed on to the US as the next chair. Mr Zarif carried back to Tehran a proposal that would amend the nuclear deal, called Joint Comprehensive Plan of Action (JCPOA), to toughen conditions on the Iranian nuclear programme. In addition, Iran is asked to commit itself to strategic restraint in the region. If the Iranian supreme leader agrees and brings the hawkish Iranian Revolutionary Guards Corps (IRGC) on board, the path is open to even a summit meeting between the Presidents of the US and Iran. The sheer magnitude of such a process dwarfs any other step announced at G-7, including Mr Trump’s friendly words about China and the possibility of the trade war ending. Interestingly, Mr Macron rejected the word mediation and instead said France was merely facilitating “exchanges”. This would be an interesting thought for India and Pakistan to avoid semantic traps.

France of course had to bend backwards to explain why the US should not pillory it for its “Digital Tax” on US cyber and digital platforms. President Macron situated the debate in the larger issue of reforming global taxation regime to plug loopholes that allow cyber multinationals to escape tax liability. In addition, there was talk of reforming the WTO, which Europe feels is a precondition to stem US unilateralism and its anti-globalisation crusade. On climate change, the group made a token effort by agreeing to spend $30 million to help fight Amazon’s fires that are ripping apart the huge forest cover that functions as the world’s lungs.

CNN has already tabulated all the misstated facts in President Trump’s answers to media questions. The most disturbing, and perhaps unsurprising, was his answer to what he proposed to do about climate change. He ignored or misunderstood the issue by saying he was a great supporter of good environment, which he illustrated by his devotion to clean air and water. No question was asked on India-Pakistan relations or the Kashmir imbroglio. On China, Mr Trump’s pusillanimity may have been simply, as he put it, part of his negotiating style, or there is really more afoot than visible. We should know anyway in a few days if the US and China have struck a deal, as otherwise the higher tariffs announced by the US on more Chinese imports would kick in.

Thus, as the US assumes the G-7 chair, two major irritants have been re-addressed with new perspectives — the Iranian nuclear deal and the Sino-US trade war. The resolution of both can alter the global trade and security environment tremendously for the better. India cannot continue as an outlier with a new freeze in relations with Pakistan. India cannot also treat the Kashmir Valley as a laboratory experiment in a security solution to a political problem. A quick return to normality and a gradual return to statehood and electoral democracy is the only way to retain not just the territory but also its people as willing components of a rising India.