Vigilance needs to be stepped up to keep Covid19 at bay 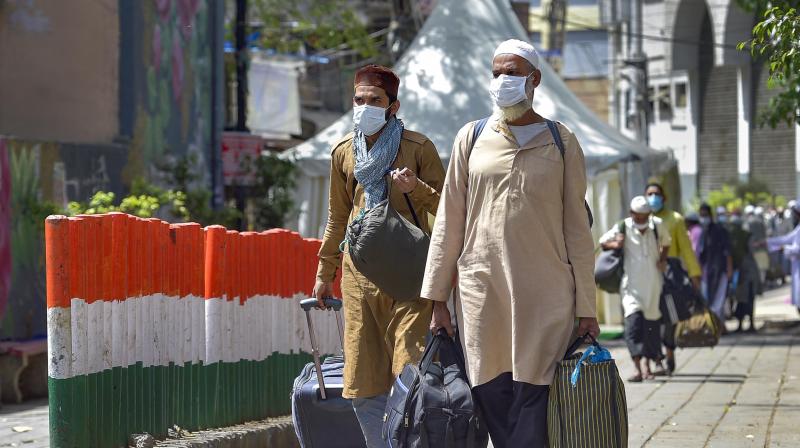 People who came for ‘Jamat’, a religious gathering at Nizamuddin Mosque, being taken to LNJP hospital for COVID-19 test, after several people showed symptoms of coronavirus, during a nationwide lockdown, in New Delhi. PTI Photo

The sudden outbreak and detection of a large number of coronavirus cases that can be traced back to a thousands-strong religious congregation held in New Delhi’s Nizamuddin area, that has already caused the deaths of at least 10 Indians and one foreigner in different parts of the country (including six in Telangana), is a warning on the perils of not taking “social distancing” seriously. At least 250 foreign nationals – including from virus-hit Malaysia and Indonesia -- had come to attend the congregation hosted by the Tablighi Jamaat at its Markaz facility in the first half of March, many of whom were among the 1,500-odd people still there on Monday, when the city’s health authorities swung into action and took at least 300 of them to hospitals. At least 24 of them have tested positive. True, the event was held before the lockdown went into effect in Delhi and the rest of India, but given the flurry of advisories early on cautioning people against gatherings of large numbers of people due to the virus threat, the actions of both the Tablighi Jamaat and the governmental authorities in allowing it to carry on was irresponsible, to say the least. The area was finally cleared on Tuesday morning, with the police moving 700-plus people to quarantine in different parts of the city, and a police case lodged against the mosque administration, but the damage has largely been done.

While the Talbighi incident is a wake-up call on the consequences of slackness in the face of a health emergency, the callous actions of those in authority in the face of the grave humanitarian crisis that we face – particularly the plight of migrants with no food or shelter who feel compelled to make the long trek homewards – is also a cause of great alarm. The shocking action of the municipal authorities in Bareilly in Uttar Pradesh – in hosing down a large group of migrants on the move with a chemical solution described by some as “insecticide” – was brutal and inhuman, to say the very least. In the face of outrage in the social media after a video of the spraying went viral, and vociferous protests by Opposition leaders, the district magistrate of the area was forced to admit that the municipal authorities had “gone too far”, but who will be held responsible for this horror? This was one more example, if any was needed, that the rights and protections that our middle classes take for granted – even in extraordinary times – do not seem to apply to the poor in India.

There was no real alternative to the nationwide lockdown that was announced by Prime Minister Narendra Modi a week ago. Those who believe that it could have been avoided just need to look at the plight of New York – a shining symbol of the richest and most powerful country in the world, which now threatens to be the epicentre of the coronavirus pandemic – to see what could have happened had India delayed any further. But our government failed to realistically assess the impact this draconian measure would have on the most vulnerable sections of our population, and plan accordingly. Some steps are now being taken, but much more needs to be done.