AA Edit: Nirbhaya hangings were nothing to gloat about 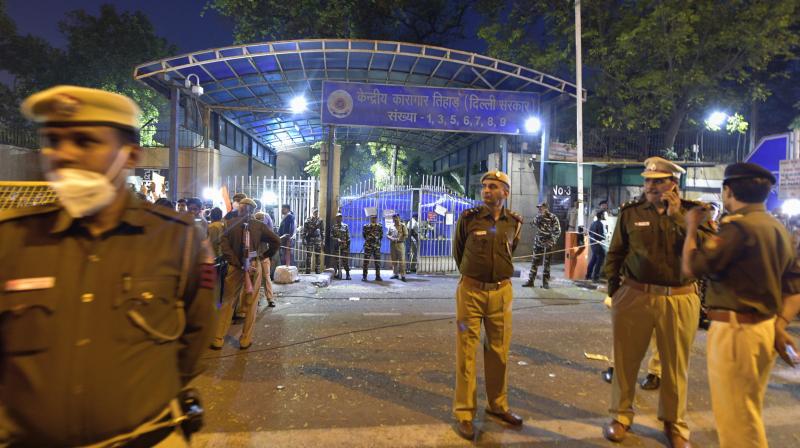 The scene outside the Tihar jail at dawn when the rape convicts in the Nirbhaya rape case were hanged.

At 5.30 am on Friday, Akshay Thakur, Pawan Gupta, Vinay Sharma and Mukesh Singh, the four convicts in the 2012 Delhi bus gang-rape and murder case were hanged until death. The hanging was carried out as per schedule in Tihar Jail after a three-judge Supreme Court bench rejected the final plea by the convicts’ lawyer, A.P. Singh, to stay their execution in a late-night hearing. In 2015, the main accused in the case, Ram Singh, had allegedly committed suicide. Another accused, who was 17 at the time of the crime, was released from a correctional centre, also in 2015.

Four death warrants had been issued in the case but the law took eight years, not an inordinately long span of time, to bring the criminals to justice. The news, no doubt, brings relief and closure to the victim’s family and friends. But instead of receiving it with appropriate soberness and respect, large sections of the society, perhaps cheerled by our honourable Prime Minister, has been reacting with an unseemly, self-congratulatory glee, turning the execution into a gladiatorial sideshow, broadcast via “reality TV”. This is distressing.

However, equally irresponsible is the superficial counter-reaction by the “woke” intelligentsia that, without reason or proportion, has picked this occasion to argue enthusiastically either against capital punishment per se or against the death penalty for the crime of rape. Perhaps, they, themselves, have only lately come around to the realisation that supporting the latter encourages the dangerous notion that a rape victim is damaged for life. But in so doing, they are ignoring two important facts — (a) Under the Indian Penal Code, the punishment for rape of an adult woman is between seven years of imprisonment and a life term, depending on the seriousness of the crime, and (b) the Supreme Court, in its wisdom, did deem this (murder) case “rarest of rare”, and, accordingly, worthy of this sentence.

Meanwhile, similar other notions and practices that stop society from following the letter and spirit of the law, rob Indian women of their agency and contribute to their “unsafety” continue to remain alive and well, unchallenged.