AA Edit: Playing to the gallery amid pandemic

Was this yet another excuse to reshape India into an obedient population? 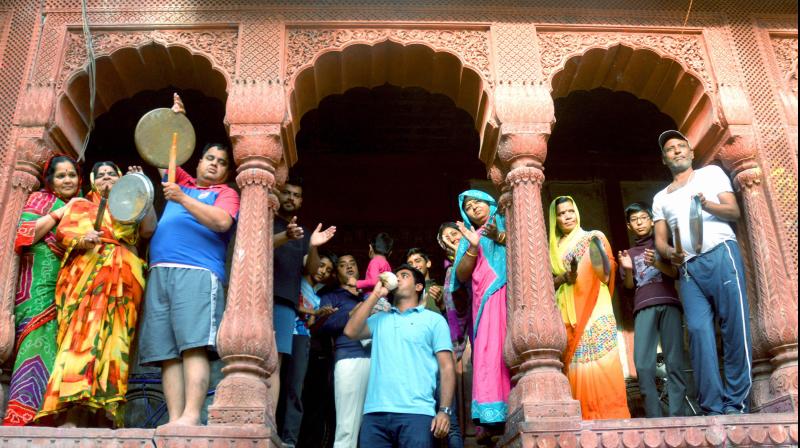 People clap and clang utensils as a gesture to show gratitude to the medical practitioners fighting the coronavirus in Bikaner, Rajasthan on March 22, 2020. PM Modi proposed a 'Janta curfew' between 7 am and 9 pm as part of social distancing to check the spread of the deadly virus. (PTI)

Indians proved that they can observe a lockdown, if Sunday’s 'janata curfew' was a case in point. With 80 districts going into lockdown, the scene on Monday in those places was not much different than the previous day, with only grocery shops, pharmacies and ATMs open. City roads were silent, colony lanes filled with birdsong, and life was unusually peaceful.

But what was also evident on Sunday was the way Indians undermine their own cause. Prime minister Narendra Modi had  people to, at 5 pm, clap their hands or bang their pots and pans. It was later rationalized as support for healthcare workers in the trenches against the Covid-19  – except those in the trenches are without supplies, uniforms, masks or weapons to fight the microbial enemy. Urban India came out and clapped or banged energetically — there are plenty of videos of it on social media. But they came together as crowds to party, dance or even climb on one another’s shoulders — a mockery of the social distancing that the PM had specifically called for. Is it their fault? After all, thanking doctors, nurses and hospital staff seemed the last thing on urban India’s mind; it was merely following the Great Leader’s orders (and also, it cost nothing). Urban India, inspired by “community feeling”, wanted to party (there is a video of one lady jumping up and down in a way that would make the PM blush, banging on a shiny pan, shrieking “Go Corona go”). No wonder the PM on Monday tweeted that people weren’t taking the curfew seriously enough. How can he blame them – these are the same people who believe that noise drives microbes out of infected bodies. Money and education are no barriers to superstition in India – film stars and industrialists were also standing around, banging pots and pans.

Was this yet another excuse to reshape India into an obedient population to follow the Great Leader’s orders as he tries to reshape the nation from the ground up? After all, he spoke for 30 minutes on the curfew (his 8 pm addresses to the nation now are something to apprehend rather than look forward to). He did not announce what his government would do for the economy – whether it is the existential crisis that our banks will face or the break in employment and daily wages the poor will have to suffer. He did not address the shortfall in masks or testing equipment for Covid-19, at a time when questions are being raised about the lack of US Drug Administration standards in the available test kits, or the fact that a Gujarat-based firm with no prior experience was given the first chance at manufacturing test kits. The curfew seemed less a panacea than an opportunity, like the Ganesha milk-drinking hoax of 1995, to gauge the extent of support in the population. And having again satiated himself on his narcissism, the Great Leader left it to the States to handle the messy details of the lockdown and healthcare.