There can be no winner in this battle against Covid-19, only survivors 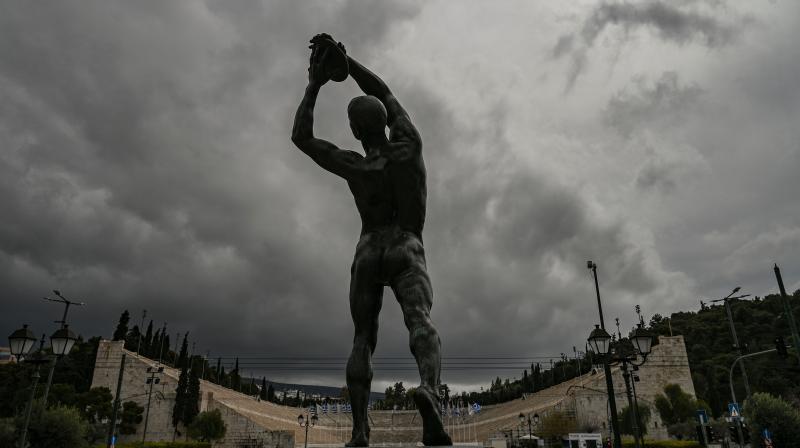 A statue of a discus thrower stands opposite Athens' Panathenaic stadium or Kalimarmaro, where the first modern Olympic Games began, in Athens, one day after the historic decision to postpone the 2020 Tokyo Olympic Games. Japan on March 25 started the unprecedented task of reorganising the Tokyo Olympics after the historic decision to postpone the world's biggest sporting event due to the COVID-19 coronavirus pandemic that has locked down one third of the planet. (AFP)

The Tokyo Olympics has bowed to the inevitable in putting off the scheduled July 24 start and picking 2021 as its year. The Covid-19 pandemic has hit sport’s greatest showpiece that has run once in four years from 1896 except during the world wars and embraced multiple disciplines to best reflect a panorama of competitive sport.

Japan may be paying the heaviest price since it has already spent $10 billion on preparations. However, they may not go waste as the Games won’t be abandoned. Nevertheless, the IOC and its sports federations will suffer a financial blow from delays in TV rights money.  Considering how much sport at all levels has already sacrificed in suspending or putting off landmark events like the French Open, the Super Bowl, the Kentucky Derby and the NBA, it is only logical that the biggest event follows suit.

“Humanity first, sport later,” said an IPL franchise owner as the cash-rich cricket league, which holds Indian audiences in its thrall, prepares to postpone or cancel altogether the 13th season. Cricket would be seen to be acting selfishly if it tries to run a truncated version of its billion-dollar league in 2020. Two seasons in 2021 may be possible if the world recovers from the pandemic.

There can be no winner in this battle against Covid-19, only survivors as the world reconciles to deal with the scars the pathogen would leave on 21st century civilisation. In an ideal world, even amid a global emergency, live sport may have proved the greatest boon to billions living in isolation at home. But that is not to be and Japan has understood the situation and taken the hit in its stride. By simply staying at home, sportspersons too have to contribute to the cause of humanity in this grave hour of crisis.