Tribute: Girish Karnad was a true national treasure, and his spirit will linger

Karnad predicted then, that Indian cinema still had a long way to go in changing its narrative style in the mainstream. 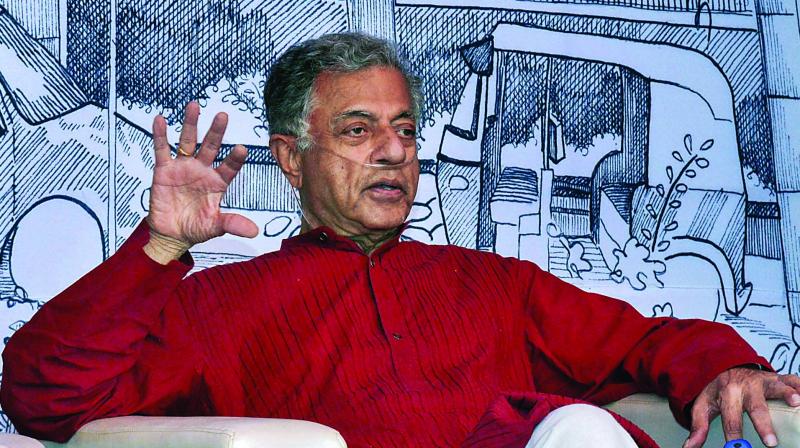 Girish Karnad at the 7th edition of the Bangalore Literature Festival (BLF) in Bengaluru. (Photo: PTI)

My first encounter with Girish Karnad, the towering genius, was when I was still a schoolboy doing my matriculation in Dharwad. A prominent Kannada daily, Samyukta Karnataka, had published a glowing feature on this young man, also from Dharwad, who had won the prestigious Rhodes Scholarship. He would go on to become one of the tallest intellectuals and theatre personalities of modern India, leaving his mark on cinema and literature.

Five years passed. I was studying at Karnataka College, still in Dharwad. Girish Karnad arrived there to give a talk. It was an impressive lecture — he spoke of cinema, literature and life in India. He talked with great admiration of Satyajit Ray, the making of the legendary film, Pather Panchali and why Ray had come to be admired the world over for his honest, brilliant and critical handling of film narratives.

He said then that films in India were generally within the framework of entertainment with dance and songs, a formula that was not only accepted by Indian cinema but also expected of them. Satyajit Ray had metamorphosed the Indian cinematic style, taking his camera to remote villages to capture the hard reality of rural life. Karnad predicted then, that Indian cinema still had a long way to go in changing its narrative style in the mainstream.

His star continued to rise and Karnad was soon celebrated for meatier roles in films like Samskara, directed by Pattabhirama Reddy and later, in the films of veteran director Shyam Benegal, Manthan, Nishant and others. He was an excellent orator and a great actor.

He was an outstanding playwright too — his works have been performed hundreds of times across the country. Tughlaq, Yayathi, Thaledanda, Nagamandala, The Dreams of Tipu Sultan and Agni Mattu Male are some of his best-known works. Tughlaq, in particular, the story of the visionary king whose ill-fated decision to shift the capital from Delhi to Daulatabad would assign him a rather unfortunate place in popular recollection. Karnad’s work, which focuses on the pioneering visions of Tughlaq, made a great impact on the socio-political scene, with its strong contemporary touch. Karnad became accepted by Hindi theatre audiences too, as the play was staged in Hindi in Delhi and Mumbai and the National School of Drama included it in its repertory.

Karnad was always happy to be known as a theatre man. I happened to spend some time with him over dinners and other social gatherings. I found him to be a man of many talents with a deep understanding of life. He told me once that he was going to choose Economics as a subject in England but then realised that there would never be an answer to economic woes, so he chose arts as his mainstay. He also said once that no matter how great a politician one might become, one would not be remembered for very long. An artist, a writer or a creative person, however, will be remembered for a long time to come. He acted in three of my own films — Kadina Benki, Usha Kiran and Aagatha. He is still remembered for his portrayal of a psychiatrist in Usha Kiran. I acted in his production of the Doordarshan teleserial, Chidambara Rahasya too, based on a book by Poornachandra Thejasvi.

No matter how famous he became, Karnad never lost his taste for the simple things in life and never did hanker for the frills and glamour of life in cinema. He had great taste, though, in everything from food to literature, films and theatre. To him, creativity was the soul and substance of life and work — a man like him never cared for external trappings and those associated with religion and caste irked him greatly. He was a great admirer of D.R. Bendre, the great poet of Dharwad, on whose life he made a documentary film for the government of Karnataka. His was a multi-faceted personality, with a rare combination of talent, scholarship and a profound understanding of the art world. And it must be said that he was an exceedingly handsome man, who found great admiration and attraction among men and women alike.

Girish Karnad was a fine orator, filmmaker and a great playwright. He said what he felt and wrote what he believed. He was fearless and a hard worker. And as is usual for a man of such candour, he found criticism too. Objections have been raised against his statements and his works. I feel, however, that he was a man with a far broader understanding of issues and he saw them from a larger perspective than most. So we need to understand his narratives or statements from this viewpoint.

He often described himself as a man with a middle-class mindset and background — and that such a man should rise to great heights of academic, theatrical and cinematic excellence must be made a part of the country’s archival and historic documents. He was a simple man always and while he participated in rallies and protests, asking for justice and equity, even calling himself an “Urban Naxal” and eating beef in public to take a stand against religious discrimination, he believed that these differences lent themselves to a robustness of Indian life and politics. He may be no more but his spirit will always survive. Girish Karnad is a national treasure and as he once foretold: A man of creativity will never be forgotten.