The war against corruption

Demonetisation is not enough to eliminate black money in India. 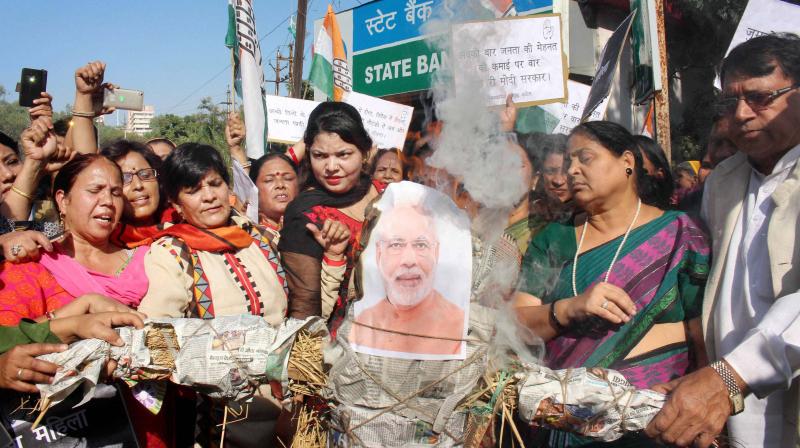 This government has a very scant idea about legal procedures, jurisprudence and principles of natural justice. By imposing demonetisation on the people of this country it has not only not allowed people to take out their own, taxed, hard-earned money, but has shaken the trust of people in banks.

We were told by the government that people have stashed black money in cash now that will turn into pieces of paper, counterfeit currency will come to an end, terror funding will stop. Now, after 22 days and about 80 deaths later, as per RBI data 60 per cent of the old high-value currency notes have entered banks, a few thousand crores have been exchanged till the time the exchange scheme was in operation, while some of them were already with banks and ATMs at the time of announcement on November 8. So with almost 30 more days to go there is about 35 per cent of old currency in the hands of people who are waiting for the lines to reduce. The question is — what was the black money estimate of cash that the government had? Terrorists print fake currency and then unleash it in our economy, so until we stop the fake printing process that problem will not be solved. They will print more notes.

As per RBI data there are 400 crores of fake currency in the market. Now only for 400 crores, does it make sense to demonetise about 15 lakh crores?

Contrary to popular perception estimates suggest the cash component of black money is about one per cent. We have to understand the difference between black income, black money and black wealth. All the three are different as soon as demonetisation was announced people started settling their cash component of black wealth. Quite a few businessmen gave advance salaries in cash to their employees so that it automatically enters the banking system. Some people till late into the night were at the jewellers buying bullion with back-dated receipts. So the objective of one per cent of the cash component also gets diminished as people find new and inventive ways. There is a misunderstanding, which this government has, that cash means black money.

Post-December 30, once again, the generation of black money will start as before via various means for instance under invoicing in trade, charging capitation fee in colleges, selling drugs, fake medicines, etc. Black money hoarders will now have Rs 2,000 notes so it will be even easier to hoard and transfer large tranches of cash.

In the last couple of days, the government is constantly changing the goalposts. First it was black money and now it is all cashless. It should understand that cash does not mean black. The question is — has the government been able to hit out at people who stashed black wealth abroad in bonds, property, bullion and cash in foreign currency? Has there been a tightening of the noose on hawala dealers who are operating brazenly? These are the people who deal in creation and storage of black wealth.

The government has done something unthinkable, it has put restrictions on the common man to withdraw his own money from his own account. The money in the account does not belong to the government.

The demonetisation process will only hit the poor and the middle class. The big offenders have already gotten away. The government has only pulled wool over people’s eyes by saying that it has acted against black money. In short, the entire exercise is just the beginning of an unimaginable disaster.

K.C. Mittal is secretary of the Congress legal and human rights cell

A bloodless coup on the monetary front

Demonetisation has rebranded Narendra Modi as the messiah of the poor. His connect with dalits, shoshit, vanchit and peedith India is now complete. It could be described as his proud socialist moment. The move has brought him closer to the common man as never before is best illustrated from the disarray in the Opposition ranks, the flop show of the Bharat bandh and the series of big election victories the BJP gained in the last three weeks.

The critics failed to respond both politically and with convincing economic arguments. This shows that the Prime Minister has largely been able to manage the biggest-ever monetary reform and sweeping social restructuring with the smoothest possible precision of a surgical genius. Politics will never be the same again. Taxes will come down. Investment and growth will become a reality with job creation. It is expected to unlock as much as Rs 6 lakh crores, which was hoarded by tax evaders. The tax base is going to double, the case of too much cash chasing too few goods will disappear. Already Maoists, terrorists and criminals are on the run. Counterfeit currency will disappear. We are witnessing a bloodless coup on the monetary front.

November 8, 2016 will perhaps go down in history as the day India unleashed the most decisive war against black money, counterfeit notes and corruption. It may not suddenly invert the socio-economic pyramid in the country, but it will for a long time alter the exercise of power and the political practice that we have so far been familiar with. Here Mr Modi played the big leveller and disruptionist of the status quo.

That is why the Opposition is sounding unimpressive and hackneyed. Nobody is saying the transition is totally painless. But to call it monumental “mismanagement and legalised loot” as Manmohan Singh said or that the fear of massive distress that would have caused to the public as P. Chidambaram said in their critique of the measure is only an expression of timidity and ineptitude in the face of a daunting task.

Nobody disputes there was no black money and corruption. No one has openly said there was no need to fight it. All are almost unanimous that they support any attempt to fight the twin evil. But they quarrel on the methodology. They say the move has distressed the poor and rural farmer. But this constituency has rejected their argument. Then they say it will slow down the economy. Another charge is that the PM has not consulted widely and that it infringes on the right of a citizen to withdraw his cash from banks. A fourth criticism is that the banking penetration and the tech-savvy of the masses are not sufficient for a modern money exchange model. No one in the right state of mind will blame 30 months of Mr Modi for any of this malaise.

Mr Modi’s idea of financial inclusion is comprehensive and real. All doubts regarding the gains of demonetisation have been positively answered in the last 20 days. Tax collections have made most of our civic bodies flush with money, banks have already collected Rs 7 lakh crores, banks are thinking of reducing lending rates and hence in February we are likely to have a balanced dream budget and all are pointing to the opportunities others missed and Mr Modi cashed on.