Peace on its way?

The interlocutor’s role is futile if the Centre is unwilling to discuss autonomy for J&K. 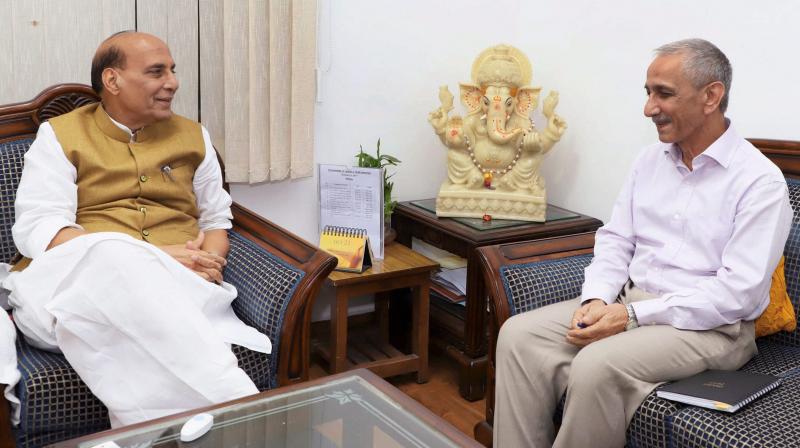 Jammu and Kashmir is at the crossroads of history. The “idea of J&K” is under threat. The pluralistic ethos of the state is being challenged and there is an attempt to demolish the identity of the state and its people. The people of all the three regions of the state are in a state of quandary. A sense of uncertainty is prevailing because “one size fits all” can’t work in J&K.

The last three years have seen variegated policies on dealing with J&K. The rhetoric that “there is no issue like the Kashmir issue” or “the Kashmir issue is settled” only exposes the political naivety of those who say it. The issue exists and has political overtones. Sagacity is the need of the hour.

The statesman like statement of Prime Minister Narendra Modi from the ramparts of the Red Fort — “Na goli se na gali se baat banegi gale lagane se” — has generated hope. The missive was followed by home minister Rajnath Singh’s visit, and his five Cs formula seemed to be an extension of that fresh narrative.

Everybody wants the PM’s statement to fructify on the ground so that peace returns to J&K and acts as a salve to bruised minds and bodies.

The recent announcement on the appointment of a new interlocutor seems to be an extension of the same call. Dineshwar Sharma has been asked to talk to all stakeholders, which received a jaded response for its wash, rinse, repeat feel, though. It still can be termed a tiny flicker in an otherwise dark alley, notwithstanding confusing signals emerging from various quarters of the government about his role. Much is at stake for this step to be “a day late and a dollar short”. Mr Sharma must talk, and talk to one and all, so that there is a palpable element of sincerity in finding a lasting solution to J&K.

The National Conference’s Autonomy Report, passed by both Houses of the state legislature in 2000, puts forward a roadmap for a solution to the Kashmir imbroglio.

The party goes a step further and walks the talk by saying that if there is a solution better than the solution offered in the autonomy report, which is acceptable to all stakeholders in J&K, meets their aspirations and urges, the party will embrace that solution.

However, it is unfortunate and dispiriting that while the restoration of autonomy is only seeking what is guaranteed to the state by the Constitution of India through Article 370, it is now being termed as subversive and separatist. Article 370 in fact puts into the constitutional framework the accession of J&K to the country, as per the “Instrument of Accession” signed by Maharaja Hari Singh on October 26, 1947. A majority of people in the state feel that the constitutional guarantee provided to them has been gradually eroded in a bid to crush their identity and their aspirations.

The demand for autonomy can’t be termed as illegitimate, but should be discussed threadbare. In the last three years, while there has been an deliberate attempt to make J&K a theatre of politics for the rest of the country, the hardliners have got well entrenched, leading to an ugly communal, regional divide.

There is an immediate need to address the aspirations within the state as well and therefore, the time to look afresh at regional autonomy for providing succour, sense of self-importance and self-worth, under the all-engulfing umbrella of the state. Else the virtual trifurcation may become more a reality than a myth, which will have dangerous connotations for the state and the country.

The mandate given to Sharma has raised hopes
Harish Khurana

The Narendra Modi government on Monday announced it would start a “sustained dialogue” process with all stakeholders, including separatists, and appointed former Intelligence Bureau director Dineshwar Sharma as its special representative.

Home minister Rajnath Singh said the move was to carry forward the “the conviction and consistency” in the government’s Kashmir policy. “We have decided that a sustained dialogue process should begin in Jammu and Kashmir”.

The home minister said Mr Sharma, who would hold the rank of a Cabinet Secretary, would have complete independence in deciding whom to hold talks with, indicating that talks with separatist leaders were also possible. He was replying to a question on whether Mr Sharma would hold discussions with the Hurriyat Conference.

Prime Minister Narendra Modi had talked to all political parties as to what could be done to find a solution to the Kashmir problem. “People told us that the dialogue process should be started. We are doing this,” the home minister said, and recalled the Prime Minister’s August 15 speech, which said: “Neither by bullet, nor by abuses but by embracing the people we can solve the problems in Jammu and Kashmir.”

The measure is significant because the BJP government at the Centre had constantly maintained a tough line on opening peace talks with separatists in Kashmir, particularly after the 2016 unrest that left over 100 civilians dead. The Congress on Monday termed the development as an admission of a “blunder” by the Modi government and of the failure of its “muscular approach”.

Mr Sharma has his work cut out. The ink hadn’t even dried on the order appointing him when a political skirmish broke out between the Congress and the BJP. The core issue is an old one — autonomy.

The statement by a former Congress minister that many seeking azaadi or independence were actually seeking autonomy raised the hackles of the BJP which termed such utterances anti-national.

The National Conference, which hasn’t held a so-called delegates’ meeting in 15 years decided to do so and released a statement supporting more autonomy for Kashmir. Still the government’s response, which seems to suggest its opposition to calls for more autonomy, does have the potential to hobble Mr Sharma’s efforts. It would have perhaps done well to hold its counsel and watch Mr Sharma’s progress in engaging with all stakeholders.

The atmosphere has so far been conducive to Mr Sharma’s mission. Violence in the Valley has reduced (relatively at least) and the Army has been very successful in thwarting terrorists. And the home minister has made it clear that Mr Sharma is free to engage with whoever he wants to, indicating an openness to talk with hardline separatist groups.

Issues related to national and internal security are non-negotiable, but other issues, specially those related to the daily lives of various sections of Kashmiri society, are not.

Mr Sharma isn’t the first interlocutor appointed by a government keen on solving the Kashmir problem. The mandate given to Mr Sharma has raised fresh hopes that some progress can be made, despite the fact that reports of other interlocutors have remained largely unimplemented. Let’s hope the recent political slugfest hasn’t hurt them.

The writer is a Delhi BJP spokesperson