A govt that means business?

Induction of ex-bureaucrats will give a professional touch to the Modi government. 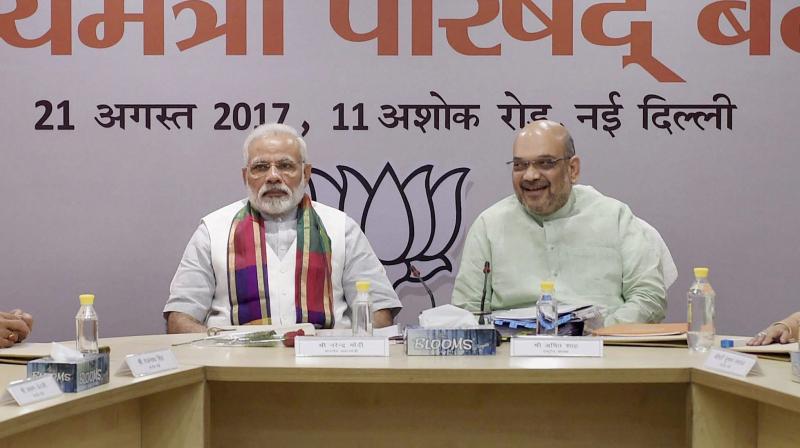 The third and perhaps the last major Cabinet reshuffle before the 2019 elections bears the firm imprint of the Narendra Modi-Amit Shah duo, and also marks the rise of a next generation in the BJP and a strategy that aims beyond 2019. While the Opposition claims the induction of four former bureaucrats with little political experience raises questions about the BJP’s “talent deficit”, it actually shows Mr Modi’s resolve to reward performance and strengthen professionalism in governance. If we have four ministers with vast bureaucratic experience, we have others who have had links with the Jan Sangh and the BJP for four-five decades. Those who stayed committed to the party’s ideology have been rewarded. In the run-up to the reshuffle, six ministers were made to resign, which shows the PM has identified team members on the basis of past performance and future potential, and both professional as well as political acumen have been factored in.With less than two years to go for the elections, the focus will be on “last-mile delivery” and also convince people about the government’s achievements. The choice has thus fallen on those who have administrative skills and political commitment. In keeping with Team Modi’s penchant for acronyms, this exercise was based on the “4P” principle - “passion, proficiency, professional and political acumen”.The new team includes former bureaucrats like former UN ambassador Hardeep Puri, former Mumbai police commissioner Satya Pal Singh, ex-home secretary R.K. Singh and former Delhi Development Authority chief K.J. Alphons, who was known as the “Demolition Man” for targeting encroachments and unauthorised constructions. On the other hand we have experienced political hands who have been rewarded - like Nirmala Sitharaman, Piyush Goyal, Dharmendra Pradhan and Mukhtar Abbas Naqvi . It’s a matter of great pride to all Indians that for the first time we have two women in the powerful Cabinet Committee on Security - Ms Sitharaman and Sushma Swaraj.The success of Dharmendra Pradhan’s “Give it Up” campaign as petroleum minister, exhorting people to give up their LPG subsidy and pass on the benefits to the poor, went in his favour. Piyush Goyal, rated as among the best-performing ministers, was shifted to the railway ministry at a time the government was facing flak over a spate of train accidents and the perceived inaction under Suresh Prabhu. The changes also clearly show Mr Modi working on performance and the promises he made to the people - such as cleaning of the Ganga. Nitin Gadkari, whose performance is rated A+, has now been tasked with this major project. The reshuffle also reflects what the PM often enunciates - of the larger idea of creating a “New India”. Giving more power to women is a key to New India, hence the moves made in this direction. The induction of top bureaucrats is not about any talent deficit in the party, an oft-repeated misinterpretation, as all these people are also party members and have worked with us for some years. They fully understand what the BJP’s thinking is and our New India vision. They are in the government to take this vision forward. Prime Minister Modi means business. He recognises talent and performance and won’t hesitate to bring in expertise wherever necessary.

The writer is a spokesman of the Delhi BJP

Bureaucracy can’t replace governance: S.V. Ramani
The induction of former bureaucrats in the Narendra Modi government not only indicates the dearth of talent in the BJP but also signifies that the government, after three years of misrule, has lost the plot. It is well known that most ministers are only toothless lions and the government is run from the PMO, be it foreign policy or internal security. The external affairs minister is a case in point. Her sole responsibility seems to be to appeal to foreign governments to give safe passage to marooned Indian citizens! This reshuffle is nothing but window dressing, and an open admission by the Prime Minister that he has lost confidence in his ministers. It is nothing but a bid to redeem lost prestige and rebuild the public perception of his tottering government, that has fallen to its nadir. It is beyond comprehension how bureaucrats’ induction can provide the nation progressive policies and good governance. If so, the government could well have been managed by bureaucrats for the last 70 years. What was the need for political parties and leaders? With the government inducting retired bureaucrats to run a country, where the majority of 1.2 billion-plus people are around the age of 27, how can one expect policies and plans of an “old boys’ club” government to be congruent, either with their aspirations or their dreams? These so-called “experts” can at best be very good file-movers and policy implementers, not policymakers. The bureaucracy can never replace governance by the people’s elected representatives. Government policies and plans are conceived after serious deliberations by visionary leaders with some proficiency in statecraft. The makers of our Constitution were also aware that only if these progressive thinking leaders were also men (and women) of the masses, who understood ground realities, could they envision policy initiatives that could take the Nation forward. Can anyone forget that the idea for one of the country’s great social welfare programmes, the mid-day meal scheme for schoolchildren, was given to Tamil Nadu’s great leader K. Kamaraj by an eight-year-old goat herder who asked him: “Who will provide me food if I go to school?” The truth is that this government has failed in every aspect of governance, and the governance deficit is visible to everyone. It is completely devoid of vision, directionless, blind to people’s hardships and clue-less about how to provide an efficient administration. It has been unsuccessful even in efficiently implementing the renamed programme initiatives of the UPA. The ill-advised, ill-conceived and inefficiently implemented economic measures have only led to complete chaos on the fiscal front. One fails to understand what message the PM wants to convey to people who are now looking to him to provide at least a semblance of governance, and if nothing, to continue the welfare measures of the UPA. The core issue is not about including experts or professionals, but about the ability of the leader of the government to provide vision and leadership. This is completely lacking in the NDA government.

The writer is secretary in the AICC communications department