UK relied too much on 'herd immunity' model, did not test enough, says Indian-origin scientist

Devi Sridhar warned that the UK could be in for an endless cycle of lockdown and release, even as the virus has claimed 1,789 lives 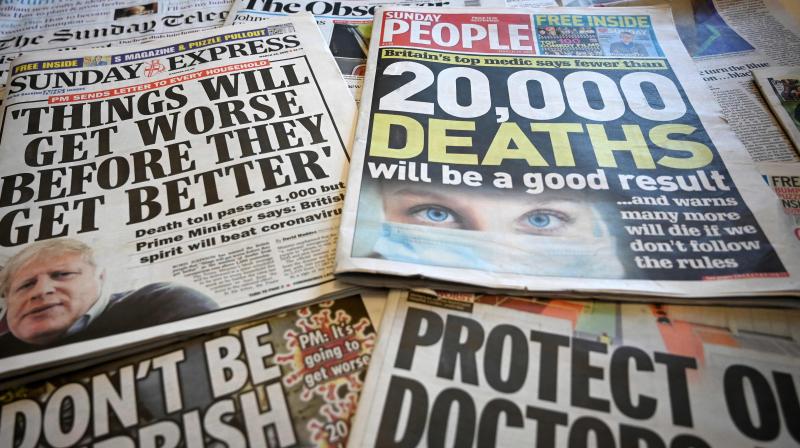 British Sunday newspapers on March 29, 2020, carry stories reporting on Britain's Prime Minister's comments that 'Things will get worse before they get better', amid the nationwide lockdown to combat the novel coronavirus pandemic. (Photo | AFP)

London: A leading Indian-origin scientist and public health expert has expressed fears that the UK’s strategy to not focus on greater testing and containment in the initial stages of the coronavirus pandemic may have been the “wrong path” to take in the country’s efforts to control the outbreak.

Devi Sridhar, Professor of Global Public Health at the University of Edinburgh, said planning for large-scale testing for the deadly virus was taken off the table early on as the government based its strategy on an Imperial College of London model, which seemed to rely on so-called “herd immunity” for a large enough section of the population to contract COVID-19 and build natural immunity over time.

“I fear that Imperial perspective (in Lancet) resulted in the UK giving up on containment too early and assuming everyone will get it,” Prof. Sridhar said on Twitter.

“Planning and preparing for unprecedented testing and using big data/apps for tracing were taken off the table. In my view, we went down the wrong path,” said Sridhar, who is supporting the World Health Organisation (WHO) on policy and governance through the pandemic.

The expert, from Edinburgh University’s Usher Institute’s College of Medicine and Veterinary Medicine, warned that the UK could be in for an endless cycle of lockdown and release if the assumption being worked on is that everyone at some stage is likely to be hit by the deadly virus, which has claimed 1,789 lives in the country.

“If assumption is everyone will get it, then UK will indeed be in an endless cycle of lockdown/release as the government turns on/off tap of spread to let virus filter through the population and attempt to keep ICU need within capacity. All while most vulnerable attempt to self-isolate,” she said.

The 35-year-old expert, who has been working alongside colleagues at her university to help people better understand the global challenge and the science behind the virus, has a research focus on the effectiveness of public health interventions.

During a session alongside former US President Bill Clinton’s daughter Chelsea at the UK’s Hay Festival in 2018, she had made references to the “interconnected” aspect of global health challenges.

“I forgot I had said this but in 2018 I gave the example of someone being infected in China by an animal, getting on a plane to the UK and having it be a challenge here—all to illustrate why health challenges are interconnected,” she recalls.

The coronavirus epicentre was in China’s Wuhan city and has since spread around the world, with the US overtaking the Chinese death toll this week and the global figures crossing 40,000.

“What could we have done different or better in the public health community to prevent the spread? That will keep many of us awake for nights ahead,” notes Sridhar, after a 13-year-old boy became the UK’s youngest victim of COVID-19 this week.

The UK government has admitted the urgent need to ramp up testing, with health minister Matt Hancock calling on hospitals to go further and test as many National Health Service (NHS) staff as they can.

British Prime Minister Boris Johnson and Hancock—who are both self-isolating after testing positive for COVID-19—are said to be working with companies worldwide to get the materials needed to build up testing capacity.

“It’s been well over two weeks since the government said it was going to roll out priority testing for healthcare staff. But many doctors still have no idea about where or how they can get tested,” said Chaand Nagpaul, the Indian-origin chair of the British Medical Association.