The cricket Head Coach is relaxing at his Alibaug farmhouse, riding out the lockdown in the company of his beloved dogs 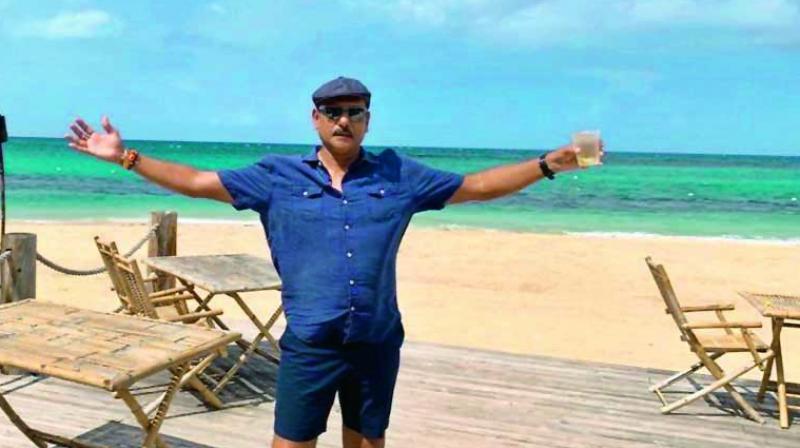 Even if COVID-19 hadn’t shut the world down, Shastri would in all probability have been at the Alibaug establishment at this time of the year, because the IPL would have been in full swing.

Head Coach of Team India, cricketer Ravi Shastri, has been chilling at his farmhouse in Alibaug during the lockdown.

Speaking to a news channel recently, Shastri picked his former teammates Roger Binny and L. Sivaramakrishnan as the two people he would most love to relax with over a few beers. But thanks to the lockdown, neither Binny nor Siva are likely to be able to take him up on this.

Known for his taste for hard liquor, Shastri told the channel that he wouldn’t waste any time in picking up some beer, now that liquor shops in Maharashtra have opened their shutters, with the COVID-19 lockdown restrictions having been eased. The former Team India player loves to spend time at his farmhouse, with a few dogs for company. It is not a glittery bungalow, but it has a fantastic pool and a fully-stocked bar, according to those who have visited the place. Frequent guests include Shah Rukh Khan, Gautam Singhania and his good friend Samir Nerurkar.

Even if COVID-19 hadn’t shut the world down, Shastri would in all probability have been at the Alibaug establishment at this time of the year, because the IPL would have been in full swing, and he is not associated with any of the franchisee teams.

Shastri grew up in Mahim and still remembers the restaurants and bars in and around Mori Road, but he rarely visits Mahim now. He bought the farmhouse about 25-30 years ago. Even though a Mumbai-Alibaug Ro-Ro car ferry service has been launched, Shastri prefers to travel there in his own chauffeur-driven car.

Many Indian cricketers, including former chief selector Sandeep Patil, have farmhouses in this coastal town.