Vladimir Kramnik, however, said recent results suggest that Anand may be past his prime. 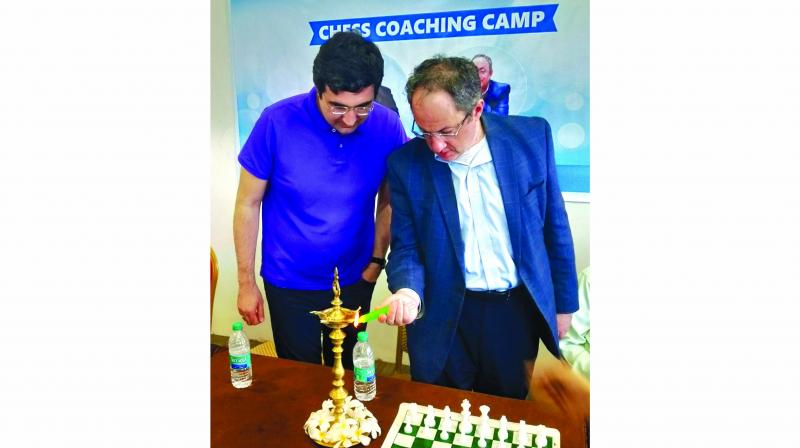 Chennai: Unlike other sports, chess players have a long professional career. And that’s perhaps why it came as a shock when Vladimir Kramnik announced his retirement last year, at the age of 43. Even though the former world champion Kramnik believes it’s not easy for those who are above 40 to compete with the younger crop in modern-day chess, the Russian expects his old nemesis Viswanathan Anand to continue for a few more years. Anand recently celebrated his 50th birthday.

“The most important thing is that Anand still likes competing. I had dinner with Vishy on Monday night and he said he still enjoys travelling and going to tournaments. I hope he will continue for a few more years. In chess, you can play as long as you want. It’s always the choice of the player,” said Kramnik.

Kramnik is in Chennai along with another former world champion Boris Gelfand to conduct a camp for 14 young Indian players at a serene beach villa on the outskirts of the city.

Kramnik, however, said recent results suggest that Anand may be past his prime.

“An outsider can identify (that you’re slowing down) by your results. His prime was so high that it became difficult for others to emulate. Definitely, he is not as good as he was at his peak. But for his age, he is still extremely good. There are not many 50-year-olds around in world chess. Fifty for a chess player is like 95 years in normal life. To remain among the top at this age is no mean achievement,” said Kramnik adding that he was not sure whether any of the current generation players can have a long career like Anand.

Echoing similar views, Gelfand said people who tried to push Anand into retirement failed miserably in the past.

“In 2013 when he lost to Carlsen in Chennai, people were trying so hard to make him retire which I think was total nonsense. You have to thank Anand for continuing at the highest level. He is a great ambassador for chess,” Gelfand said.

Kramnik recalled a story of young Anand who made heads turn in Russia.  “I think it was in ‘86. Efim Geller was teased so much in Russia for losing to a young Indian in a tournament in Kolkata. They teased so much that it was getting to Geller. He, however, said he had no qualms in losing to a World champion. It was quite a surprise. Now, it’s kind of a normal scene, for a Russian Grandmaster losing to an Indian,” Kramnik added.

Gelfand said Chennai has such a big concentration of chess talent. “Our goal, as I see it, is to show some ways they should improve quicker. It’s such a privilege to be working with Vladimir and such talented juniors.,” he added.

Talking about the importance of trainers in the era of training with a lot of chess software, Gelfand said: “I think it puts even more importance to trainers. Nowadays there is too much information and too many engines. So, it’s very easy to get lost. No one knows where 6to navigate. Well, in each database, we have like nine million games. And if you look through all of them, you get lost.”