When the League was stopped, the Lakers were leading the Western Conference and had the second-best League record behind Milwaukee 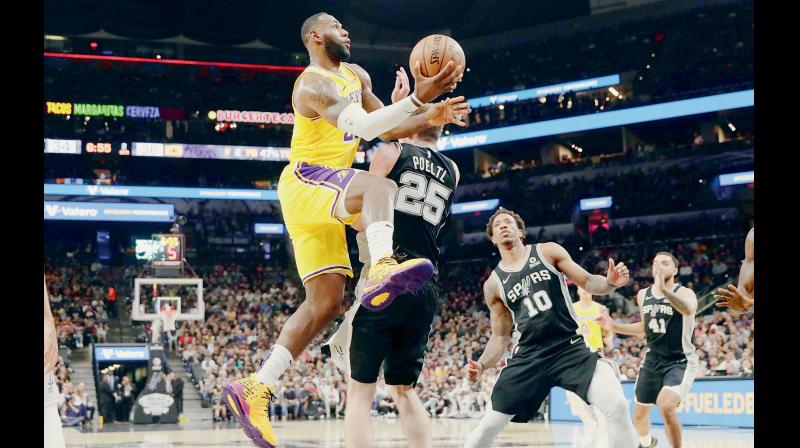 Los Angeles: LeBron James says the abrupt shutdown of the NBA season due to the worldwide coronavirus pandemic has left the Los Angeles Lakers feeling like they still have something to prove.

The Lakers were in the midst of a revival season, having made the playoffs for the first time in seven years, when the league suspended the 2019-20 season on March 11 after Rudy Gobert tested positive for Covid19.

At the time of the postponement, the Lakers were in first place in the Western Conference and had the second-best record in the league behind Milwaukee. If the season doesn't resume, James says there will be a void.

"Closure? No. But to be proud of what we were able to accomplish to this point, I'll be able to look back and say we did something special in that small period of time," James said during a conference call with reporters on Wednesday.

"Just the ups and downs not only on the floor but off the floor everything that we've had to endure as Lakers faithful."

Overwhelmed by the pandemic

James said he's having trouble coming to grips with the scale of the pandemic, which has so far killed more than 14,700 people in the US, including almost 200 in his home state of Ohio.

"How do you assess what's going on over the last three weeks or however long this pandemic has been going on? It's unnatural," James said.

"It's something that's never happened before. Some of you guys are older than me, probably never seen this happen before. You just kind of take all the information you have on a day-to-day basis."

He has been spending his self-isolating time practicing basketball with his son Bronny and talking on the phone with teammates and Lakers coach Frank Vogel.

"I got a couple friends that have their own indoor facilities," James said of his training sessions with his son. "They strip it down, wipe it down. It's pretty much me in there along with my son. It's just us."

Eager to return to court

He wants to get back to basketball but adds it will be up to the experts to decide when. NBA commissioner Adam Silver said this week he doesn't expect a decision on whether they can salvage the season until at least May.

"Once they allow us to resume some type of activity, I would love to get things back going," James said. "If it's Las Vegas or somewhere else that can hold us and keep us in the best possible chance to be safe, not only on the floor but off the floor as well. Those conversations will be had."