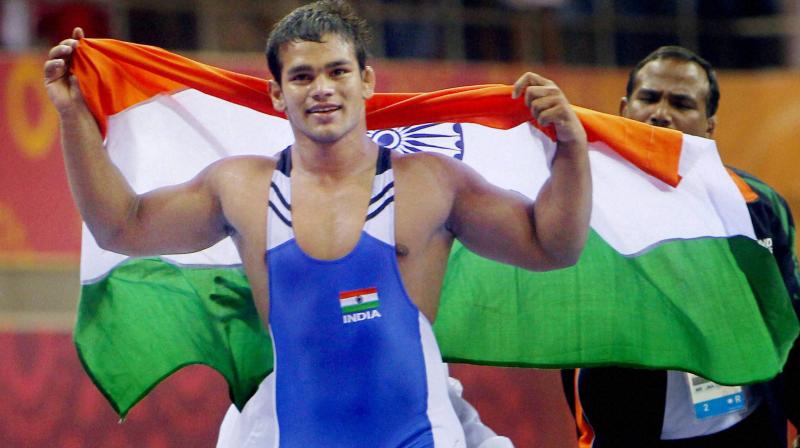 File photo of Narsingh Yadav who tested positive for a banned steroid that ruled him out of the Rio Olympics. PTI Photo

New Delhi: The postponement of Tokyo Olympics to 2021 has handed Narsingh Pancham Yadav a lifeline and the dope-tainted wrestler on Thursday said he will make full use of the "golden chance" after the national federation made it clear that it won't come in the way of his return.

If the Olympics was to be held as scheduled in July-August this year, Yadav would not have got the chance to compete due to his four-year doping ban which ends in July.

But now he has a full year to make his case in the 74kg category after the COVID-19 pandemic forced the postponement of the Games. India is yet to secure an Olympic quota in the division which was once dominated by Sushil Kumar, the country's lone double Olympic-medallist who is now on the wane.

Earlier in the day, the Wrestling Federation of India (WFI) had said that it won't stop Yadav from making a comeback.

"I always believed that if I have not done anything wrong, no wrong will happen to me. Now by God's grace, I have got this chance again out of nowhere," Yadav told PTI from Mumbai where he is training with his coach Jagmal Singh.

"I am completely focused on my comeback and determined to win a medal at the Tokyo Games," he added.

Yadav was handed a four-year ban by Court of Arbitration for Sport (CAS) in August 2016 for failing a dope test, which was ruled as sabotage by the National Anti-Doping Agency.

The ban came about due to an appeal by the World Anti-Doping Agency (WADA) just hours before his bout was to start at the Rio Olympic Games. He got there after a bitter selection row, involving Sushil.

Yadav had even accused the two-time Olympic medallist of trying to sabotage his career after failing the dope test, an allegation which was never proved.

"I have not competed but I have been training with dedication. I am confident that not only will I qualify for the Olympics but also stand on the podium," Narsingh said.

Tokyo-bound boxers to get online coaching amid lockdown