The Mi LED TV 4X Pro 55-inch has the same hardware (almost) in comparison to the Mi TV 4. 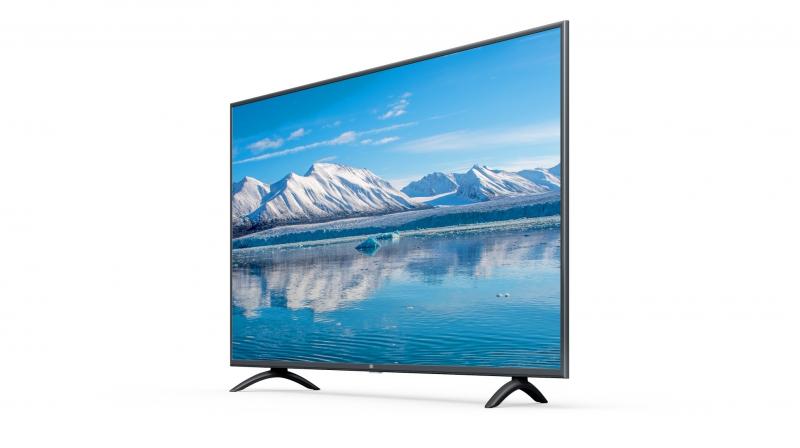 The new Mi LED TV 4X Pro 55-inch features a stronger chassis but loses out on the thin profile that the Mi TV 4 had to offer.
Rating:

Head to Amazon or Flipkart and search for a 4K UHD smart 55-inch TV and you will find a few that will probably hit your eye. They sell below the Rs 40,000 price point. One is TCL, while another unknown brand is Kevin offering it at Rs 35,990. And Xiaomi is selling their Mi LED TV 4X Pro 55-inch 4K UHD for Rs 39,999. Probably you may see it as a television expensive to a few competitors. While they could be opted for sure, the distinguishing feature between the Xiaomi and other brands definitely don’t need to be spelt out. Xiaomi is well-known in India, has many service centres around the country and the TV itself features Android and Patchwall, which is something that thet brand needs to address.

Xiaomi entered the television segment in India almost a year ago. And the first television they launched here was the Mi TV 4, which was the slimmest 4K 55-inch television at the cheapest price you could buy. The TV had a panel that stood just 4.99mm thick — thinner than your smartphone. While the TV was an awesome home appliance to buy, the company has sadly discontinued the product due to its delicate panel which was prone to damage when transporting it. So Xiaomi had to re-think how they could keep the same hardware while offering its fans the best of its television range. And hence a new release — the Mi LED TV 4X Pro 55-inch — which is specifically built for the Indian consumer. The new variant is priced even cheaper to the original Mi TV 4 and retails at Rs 39,999. Let’s check out how this television is different from the older king. 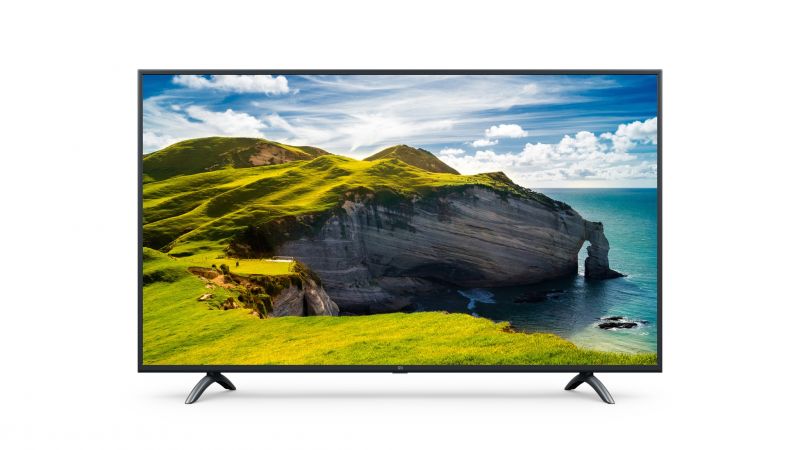 The Mi LED TV 4X Pro 55-inch has the same hardware (almost) in comparison to the Mi TV 4. The only difference here is the chassis design and newer logic board. The Mi TV 4, as for what Xiaomi said, was trouble for transportation. The new Mi LED TV 4X Pro 55-inch features a stronger chassis but loses out on the thin profile that the Mi TV 4 had to offer. It is not as thin as you would expect but is definitely sturdier than the older king. The other reason explained to us is that the feedback from customers stated that though the Mi TV 4 was chic looking and the slimmest, it was never easily visible from the front unless one went to the sides and looked at it personally. In short, the slim profile, though enjoyed by the owner, was never visible to his guests. Also, there was a huge risk when cleaning the TV or connecting to the ports behind — the television was delicate and once could unknowingly damage it if too much pressure was applied to the panel. The final changes on the newer TV as compared to the older one — sturdier frame/chassis, but with a noticeable bezel all around. So you now get a simple conventional-looking television as compared to the chic and slim Mi TV bezelless 4. 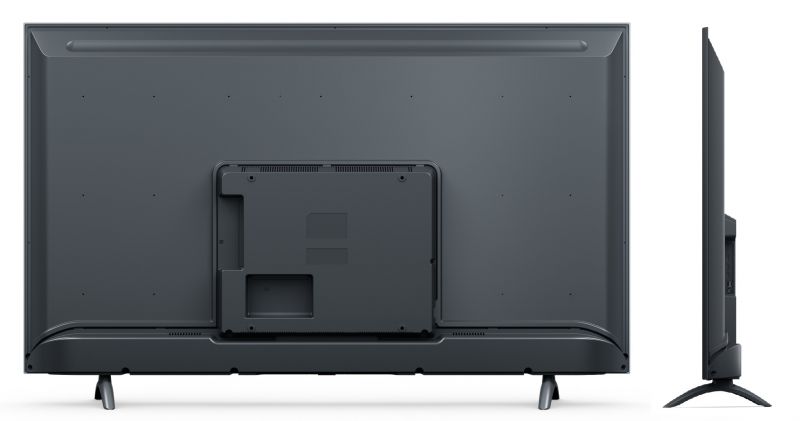 All new design, but a pretty conventional look to make the TV more durable, especially while transportation.

As mentioned, the new Mi LED TV 4X Pro 55-inch sports a sturdier frame that helps protect the display panel. The rear panel is made of metal, while the bezels are made from plastic with a brushed-aluminium look. The only button you will find, as with all the newer Android TVs, is the power button. The rest of the control panel takes a shift from the rear/bottom of the TV to the remote controller. Mi TVs sport a Bluetooth remote control and the newer variants now come with a new remote that features voice input — resembling the same seen on Amazon’s Fire TV stick remotes. The Mi LED TV 4X Pro 55-inch sports Android TV and Patchwall, which was not the case on the older Mi TV 4 which only supported Patchwall. The Mi LED TV 4X Pro 55-inch with Android TV now requires better hardware for compatibility and compliance, and hence there are slight upgrades in comparison to the older Mi TV 4. 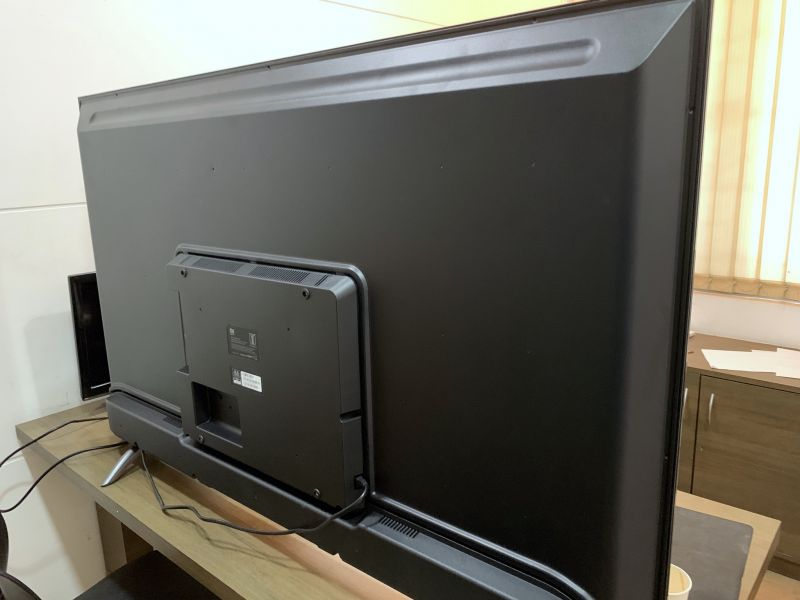 Rear panel is made using metal, is firm and strong. Wall mounting is the centre.

Specifications at a glance: 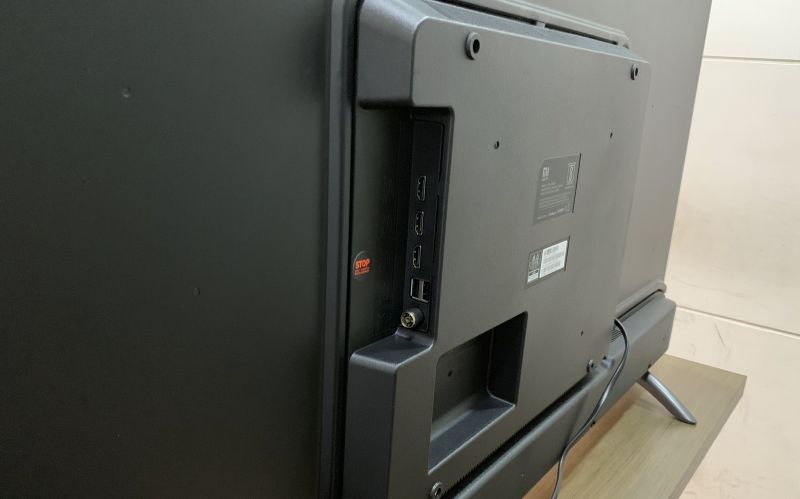 HDMI and USB ports can be accessed, but are not as easy if wall mounted.

As for the specifications, the new 55-inch sports the same panel, but gains 2 Watts in audio power, has the same processor, but now sports a better graphics processor and now features Android TV. The rest is almost identical to the Mi TV 4. Netflix and Amazon Prime are still missing, but Xiaomi said that there is work in progress and they shall soon make an announcement on its final development with the two OTT services. However, for now, you can enjoy YouTube, which was not featured on the older variant. 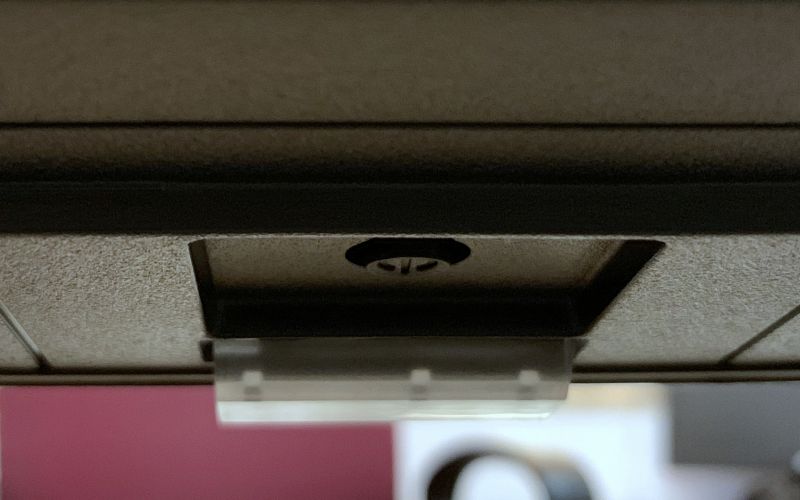 The power button is slightly deeper on the bottom.

Installation of the television is as before and you would have to invest an additional amount if you were to wall mount it. But again, as seen on the previous model, and prominent with most large-panel televisions, wall mounting gives rise to issues concerning to rear panel connections. The I/O panel is pretty deep towards the centre and once wall mounted, it is difficult to reach behind and connect/change input cables. While the HDMI and USB ports are still easier as they are accessible (but still difficult) from the right, the AV cables are almost impossible to connect if wall mounted. If you are opting for this TV and constantly keep changing the input cables, be prepared with these options — either place it on a table and forget wall mounting, use a costlier wall mounting bracket that allows you to pull the television ahead, or opt for extension cables before wall mounting the TV. 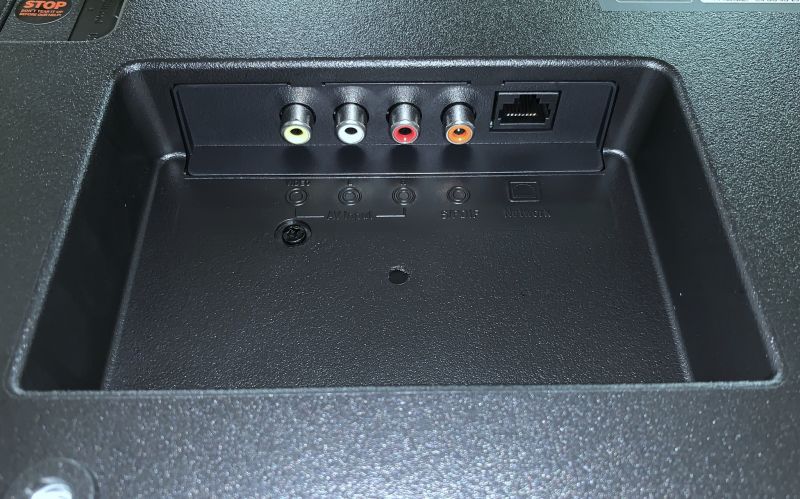 The regular AV, S/PDIF and Ethernet are on the rear panel and difficult to reach if wall mounted.

Heading down to the performance, we could say that there is no other 4K TV that performs in this price bracket — both on performance and experience. The remote allows instant switching between Android TV and Patchwall with the press of a button. The user interface is very smooth and almost near perfect. The Patchwall user interface is even faster than the previous generation — thanks to the upgraded hardware. The never-ending scroll of content offers a lot of regional content for the Indian audience, but there are still no personalization options for individuals. We are used to Netflix and Amazon Prime where content personalization is a huge welcome. Xiaomi says that personalization will soon come into play after they are able to collect the database of registered accounts and only then they can cater to specific users. The Patchwall UI also does not feature any login options where we can restrict content viewing according to age groups or genre. Sadly, the present content structure will make you hunt for something that will interest you as most of the promoted content is featured towards the top and is internally managed by Xiaomi. 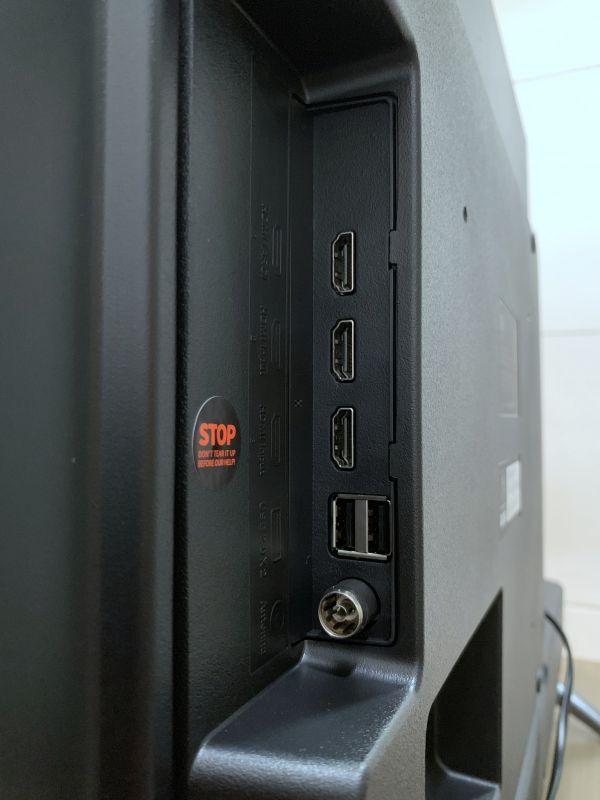 As for core performance, we found nothing to complain. Viewing angles are as good, colours are sharp, contrast levels are great. Content available in HDR does look rich and vibrant, but it all also depends on the source. The 10-bit panel manages content well, but the actual delivery will only be visible if your input source plays 10-bit content in its full glory. There is very limited such content available today and are expensive and need to be played using specific compatible players only. Such content is very limited on the internet, but it is good to know that the TV is compatible for the same and is future-ready for the times ahead. 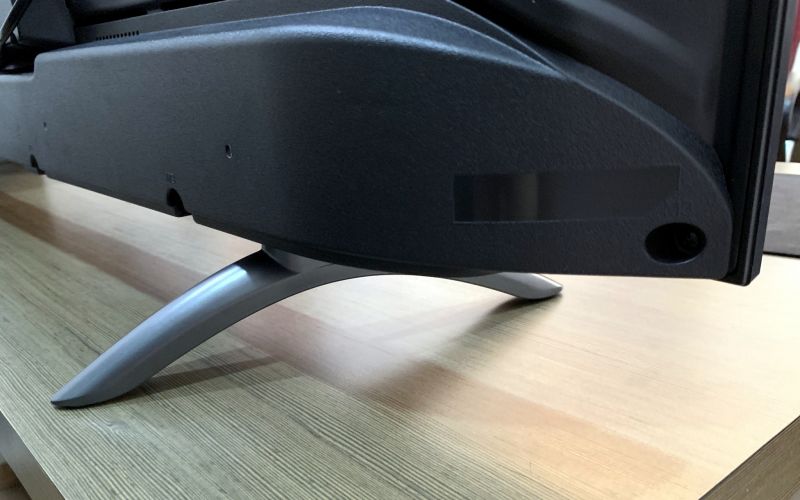 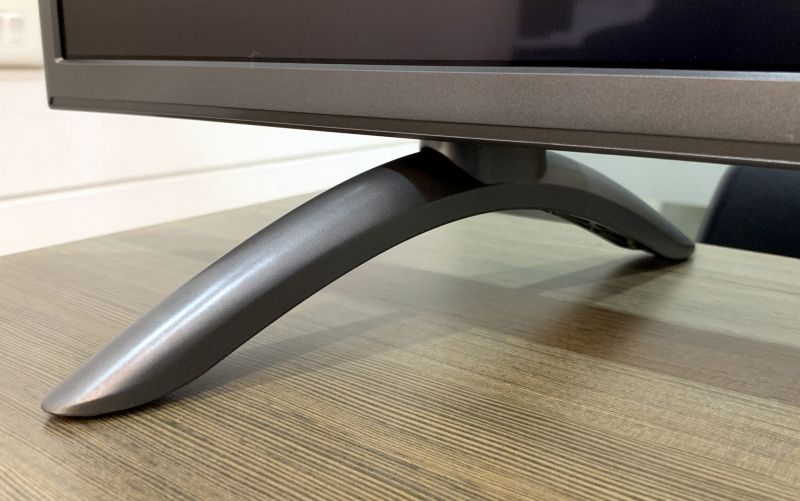 The stands are firm and strong.

As for the audio department, the new Mi LED TV 4X Pro now features two 10W speakers as opposed to two 8W speakers on the Mi TV 4. While the audio is definitely better and louder than before, it is still not as impactful as we expected. Adding in a Soundbar or external speakers is the only other way to enhance the 4K experience. Taking this as an advantage, Xiaomi also launched the Mi Soundbar to compliment their TVs and priced it at a good Rs 4,999. Clubbing them together, you could get a great 4K TV experience at the cost of the Mi TV 4. What you then get at the same (Rs 44,998) price — Android TV, better audio, faster UI and a sturdier build, but will lose out only on the stunning looks what the Mi TV 4 offered. Nevertheless, the performance of the TV and low risk is all that should matter. 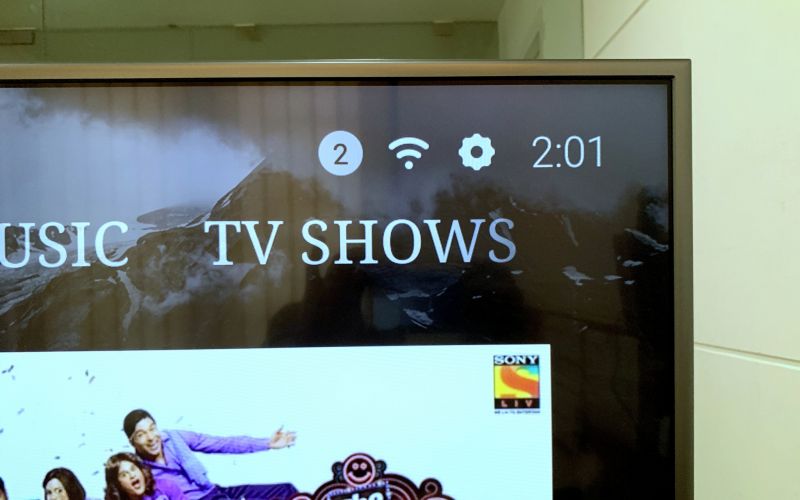 Not bezelless. The plastic borders are just shy of 1-inch on all sides.