Supply of phones, computers yet to spring back as China factories struggle to reopen

Over 80% of Apple, Samsung phones, 50% of world’s PCs are made in China but chips must come from US where production is hit by corona crisis 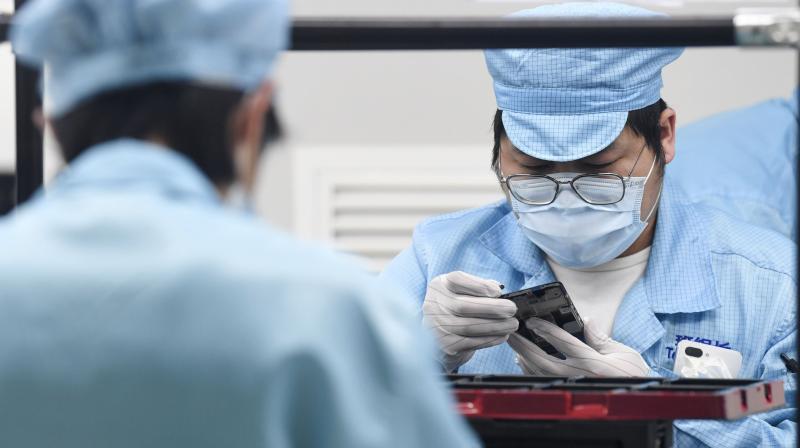 Beijing: Factories in China, struggling to reopen after the coronavirus shut down the economy, face a new threat from US anti-disease controls that might disrupt the flow of microchips and other components.

Chinese manufacturers assemble more than 80% of smartphones for Apple, Samsung and other brands, half of the world's personal computers and a big share of home appliances and other goods. But they need US processor chips and other high-value components.

American factories are operating, but the National Federation of Independent Business says 39% of 300 companies it surveyed already were suffering supply disruptions.

One in six companies that responded to a March 9-14 survey has run out of components and others are running low, the American Chamber of Commerce in South China said in a report Wednesday.

The United States, Europe and other Asian countries accounted for 18% of shortages. It said supply chains from the United States are suffering the second-biggest disruption after those in China.

Smartphone brands will likely be hard-hit due to their reliance on Chinese assembly and fragmented groups of components suppliers, according to IDC, a market intelligence firm. Germany, Japan and South Korea also supply microprocessors and other smartphone components, but the most advanced chip producers are American.

However, Chinese smartphone and telecom equipment maker Huawei has said it expects no change in its supply chain in the next three to six months. The company scrambled to remove American components from its products last year after President Donald Trump imposed curbs on access to US technology.

Manufacturers already were looking for ways to rely less on China after a tariff war with Washington blew up in 2018. But few countries can match its vast workforce, efficient suppliers and brand new ports and other infrastructure.

In addition to its workforce and rising skills, China is a leader along with the United States in embracing digital technology to make its supply chains even more competitive, Gerry Mattios, a Bain & Co. supply chain expert said.

Companies including South Korea's Samsung Electronics have shifted some production to Vietnam to cut labour costs. But Vietnam's ports, airports and other infrastructure are straining to keep up with growing trade.

“I think China, even after this Covid, will still have a major competitive advantage,”' said Mattios.