Salvador Nasralla called for more protests on Monday and vowed to take his claims of fraud before the Organisation of American States. 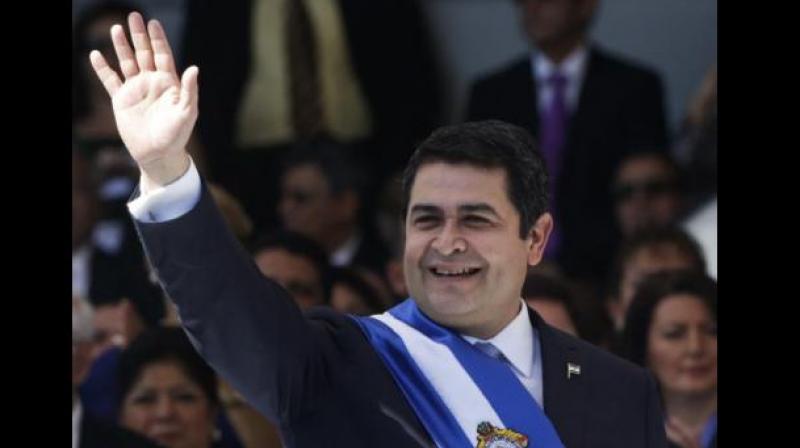 There was no immediate public comment by Hernandez, whose sister Hilda Hernandez, a Cabinet minister, died on Saturday in a helicopter crash. (Photo: AP)

Tegucigalpa: President Juan Orlando Hernandez was declared the winner of Honduras' disputed election, but that did little to quell unrest from weeks of certainty as challenger Salvador Nasralla called for more protests on Monday and vowed to take his claims of fraud before the Organisation of American States.

Electoral court president David Matamoros made the announcement Sunday evening, saying, "We have fulfilled our obligation (and) we wish for there to be peace in our country."

According to the court's official count, Hernandez won with 42.95 per cent to 41.42 for Nasralla, who well before the announcement had challenged the result and said he would not recognize it.

There were reports of nighttime demonstrations on main boulevards in Tegucigalpa, the capital, and other cities, and Nasralla's party called for more protests on Monday. At least 17 people have died in violent street clashes since the Nov. 26 election.

There was no immediate public comment by Hernandez, whose sister Hilda Hernandez, a Cabinet minister, died on Saturday in a helicopter crash.

Earlier on Sunday Nasralla traveled to Washington to present what he called "numerous" examples of evidence of alleged fraud. He said he planned to meet with officials from the OAS, the US State Department and human rights groups.

Interviewed by UneTV during a layover at the Miami airport, Nasralla called Hernandez's re-election illegitimate and said he would ask the OAS to invoke its democratic charter against Honduras.

"The declaration by the court is a mockery because it tramples the will of the people," Nasralla said. He added that he was "very optimistic" because "the people do not endorse fraud."

"May God take us having made our confessions because today the people will defend in the streets the victory that it obtained at the ballot box," Zelaya said.

In a statement, he urged police and the armed forces to "place themselves under the direction of President-elect Salvador Nasralla" and cease operations against the election protests.

Former Bolivian President Jorge Quiroga, head of the OAS election observers mission, read a statement to journalists saying the mission "believes it has observed a process of low quality.

The OAS mission concludes that it cannot guarantee that the doubts about the process have been cleared up."

The first results reported by the electoral court before dawn the day after the Nov. 26 election showed Nasralla with a significant lead over Hernandez with nearly 60 per cent of the vote counted.

Then public updates of the count mysteriously stopped for more than a day, and when they resumed, that lead steadily eroded and ultimately reversed in Hernandez's favour.

The electoral court recently conducted a recount of ballot boxes that presented irregularities and said there was virtually no change to its count. Since then it had been considering challenges filed by candidates.

Hernandez, a 49-year-old businessman and former lawmaker, took office in January 2014 and built support largely on a drop in violence in this impoverished Central American country.

But corruption and drug trafficking allegations cast a shadow over his government, and his re-election bid fuelled charges that his National Party was seeking to entrench itself in power by getting a court ruling allowing him to seek a second term.

Re-election has long been outlawed in the country, and Zelaya was ousted as president in a 2009 coup ostensibly because he wanted to run again himself. He later founded the party that ran Nasralla as its candidate.

"The people say: 'JOH you are not our President,'" Zelaya tweeted, referring to Hernandez's initials. "We must mobilize immediately to all public places. They are violating the will of the PEOPLE."