She was not separated from mother at US border: Father of girl on Time cover

Dozens of newspapers, magazines around globe published sobbing girl's picture, swelling tide of outrage that pushed Trump to back down. 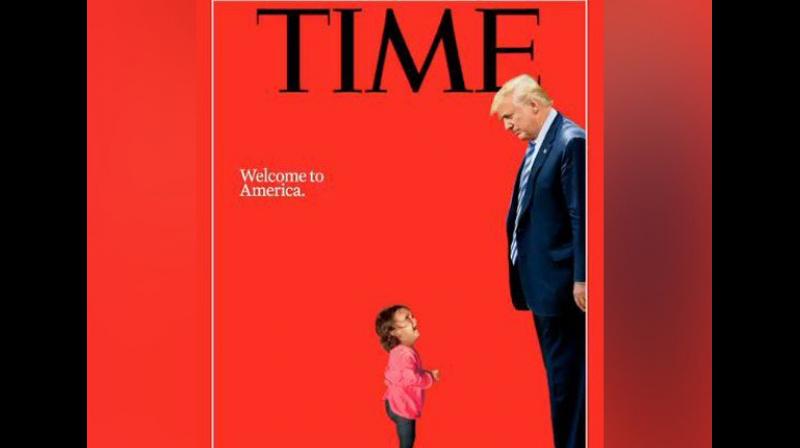 The powerful original photograph, taken at the scene of a border detention by Getty Images photographer John Moore, became one of the iconic images in the flurry of media coverage about the separation of families by the Trump administration. (Photo: @ANI/Twitter)

Tegucigalpa: The Honduran toddler pictured sobbing in a pink jacket before US President Donald Trump on an upcoming cover of Time magazine was not separated from her mother at the US border, according to a man who says he is the girl's father.

The powerful original photograph, taken at the scene of a border detention by Getty Images photographer John Moore, became one of the iconic images in the flurry of media coverage about the separation of families by the Trump administration.

Dozens of newspapers and magazines around the globe published the picture, swelling the tide of outrage that pushed Trump to back down Wednesday and say families would no longer be separated.

"My daughter has become a symbol of the ... separation of children at the US border. She may have even touched President Trump's heart," Denis Valera told Reuters in a telephone interview.

Valera said the little girl and her mother, Sandra Sanchez, have been detained together in the Texas border town of McAllen, where Sanchez has applied for asylum, and they were not separated after being detained near the border.

Varela said he was awestruck and pained when he first saw the photo of his crying daughter on TV. "Seeing what was happening to her in that moment breaks anyone's heart," he said.

The photo was used on a Facebook fundraiser that drew more than USD 17 million dollars in donations from close to half a million people for the Refugee and Immigrant Center for Education and Legal Services (RAICES), a Texas-based nonprofit that provides legal defense services to immigrants and refugees.

The Trump administration's "zero-tolerance" immigration policy had led to the separation of 2,342 children from their parents at the US-Mexico border between May 5 and June 9.

Sanchez and her daughter had left Puerto Cortes, a major Honduran port north of the capital city, Tegucigalpa, without telling Valera or the couple's three other children, he said.

He said he imagined that Sanchez left with the little girl for the United States, where she has family, in search of better economic opportunities.

"If they are deported, that is OK as long as they do not leave the child without her mother," Valera said. "I am waiting to see what happens with them."