Kavanaugh showed why I nominated him: Trump backs SC pick after hearing

Judiciary Committee is set to vote on its recommendation Friday before nomination goes to full Senate, where Republicans hold a slim edge. 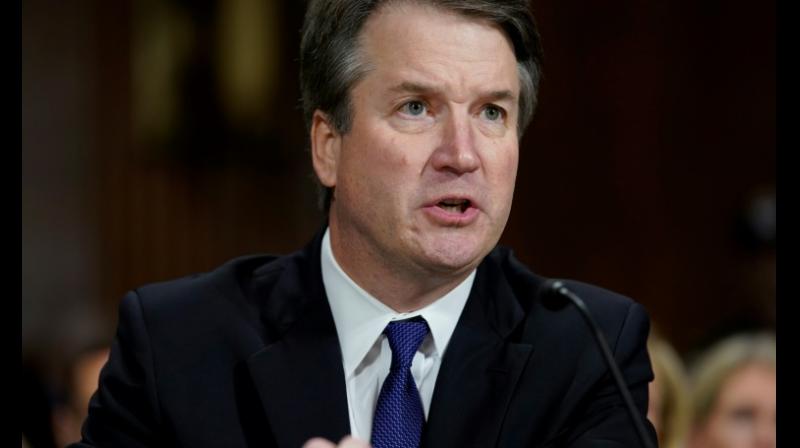 In a passionate defense, the 53-year-old conservative judge insisted before the Senate Judiciary Committee that it never happened, accused Democrats of destroying his reputation and condemned his confirmation battle as a 'national disgrace' and a 'circus'. (Photo: AFP)

Washington: Donald Trump whole-heartedly backed Brett Kavanaugh, whose Supreme Court nomination will be put to an initial vote Friday, after a dramatic Senate hearing that saw him furiously fight back against sexual assault allegations dating back decades ago.

America watched transfixed as the gripping day-long hearing opened with Christine Blasey Ford, 51, recounting to a packed room the harrowing details of what she said was an attempted rape by Kavanaugh 36 years ago.

In a passionate defense, the 53-year-old conservative judge insisted before the Senate Judiciary Committee that it never happened, accused Democrats of destroying his reputation and condemned his confirmation battle as a "national disgrace" and a "circus."

"Judge Kavanaugh showed America exactly why I nominated him," the president tweeted just minutes after the close of the hearing.

"His testimony was powerful, honest and riveting," Trump said. "Democrats' search and destroy strategy is disgraceful and this process has been a total sham and effort to delay, obstruct and resist. The Senate must vote!"

Senate Majority Leader Mitch McConnell said Trump would get his wish, with the Judiciary Committee -- which has 11 Republicans and 10 Democrats -- set to vote on its recommendation Friday before the nomination goes to the full Senate, where Republicans hold a slim 51-49 edge.

The allegations against Kavanaugh by Blasey Ford, a psychology professor in California, have threatened to derail Trump's bid to tilt the nation's highest court to the right for years to come.

They come against a backdrop of the #MeToo movement and the hearing included sharp exchanges between Republicans and Democrats mirroring the atmosphere of bitter political partisanship in Washington.

"I categorically and unequivocally deny the allegation by Dr Ford," Kavanaugh said in an opening statement during which his voice shook with anger, repeatedly fighting back tears.

"I've never sexually assaulted anyone, not in high school, not in college, not ever," he said. "I am innocent of this charge."

Earlier, during four hours of testimony, Blasey Ford said she was "100 percent" certain that Kavanaugh was her assailant and it was "absolutely not" a case of mistaken identity.

"I am here today not because I want to be," Blasey Ford said as she recounted the alleged assault at a high school party at a suburban Maryland home.

"I am terrified," she said, her voice often quavering. "I am here because I believe it is my civic duty to tell you what happened to me."

The married mother-of-two, wearing glasses and a sober dark blue suit, appeared nervous but poised as she sat at the witness table, consulting occasionally with her lawyer.

She said Kavanaugh and a friend of his, Mark Judge, were drunk at the 1982 party when they pushed her into a bedroom.

"Brett and Mark came into the bedroom and locked the door behind them," she said. "I was pushed onto the bed and Brett got on top of me.

"I believed he was going to rape me," she said. "I tried to yell for help. When I did, Brett put his hand over my mouth to stop me from yelling.

"It was hard for me to breathe, and I thought that Brett was accidentally going to kill me," she said.

Blasey Ford said she managed to escape after Judge jumped on the bed, toppling the three on to the floor.

Kavanaugh said he did not watch Blasey Ford's testimony but he categorically denied her allegations.

"This whole two-week effort has been a calculated and orchestrated political hit fueled with apparent pent-up anger about President Trump and the 2016 election," he said. "This is a circus."

"My family and my name have been permanently destroyed by vicious and false accusations," Kavanaugh continued. "This confirmation process has become a national disgrace."

But he said he would not be "intimidated" into withdrawing his candidacy for a spot on the nine-member Supreme Court. "You may defeat me in the final vote but you'll never get me to quit. Never," he said.

Trump nominated Kavanaugh to replace Justice Anthony Kennedy, who had been a swing vote on a court now divided between four conservative and four liberal justices.

Democrats on the committee praised Blasey Ford for coming forward and repeatedly questioned Kavanaugh about his drinking habits in high school, asking if he had ever "blacked out" while drunk.

"I believe you," Senator Richard Blumenthal, a Democrat from Connecticut, told Blasey Ford.

Blumenthal also hit out at Trump for failing to authorize an FBI investigation into Blasey Ford's allegations, a move he said "amounts to a cover-up."

Several Republican senators accused Democrats of trying to delay Kavanaugh's nomination until November in the hopes of capturing control of the Senate.

"This is the most unethical sham since I've been in politics," said Senator Lindsey Graham of South Carolina. "I hope the American people can see through this sham.

"I intend to vote for you and I hope everybody who is fair-minded will," he told Kavanaugh.