The External Affairs Minister also said he had a 'good exchange of views' with Kono. 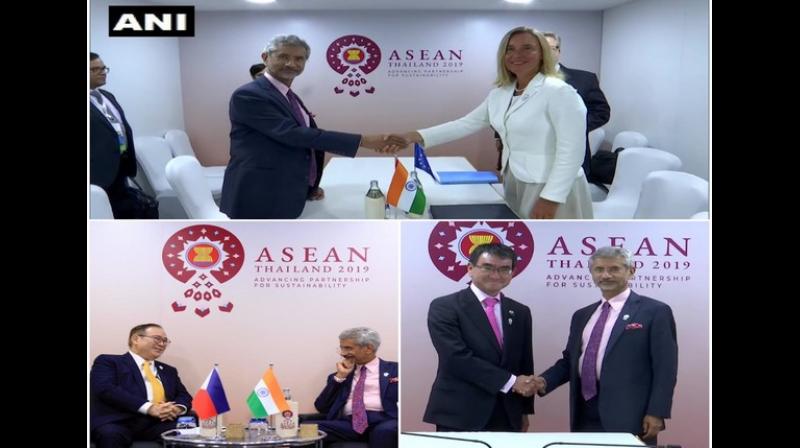 The External Affairs Minister also said he had a "good exchange of views" with Kono.

"Carrying on from the Osaka #G20 meeting. Good exchange of views with Japanese FM @konotaromp," Jaishankar wrote on Twitter.

"Pleasure to meet a Foreign Minister with such warm sentiments for India. Thank you @teddyboylocsin," Jaishankar said.

During the ASEAN ministerial meet earlier in the day, Jaishankar said India sees ASEAN as a region of great importance and that engagement with these countries will continue to remain a critical element in New Delhi's Act East Policy.

The External Affairs Minister also held bilateral talks with his Thai and New Zealand counterparts and discussed issues of mutual interest, including BIMSTEC cooperation and Indo-Pacific, ahead of the ministerial meeting.

Jaishankar is on a two-day visit to Thailand to attend the ASEAN-India Ministerial Meeting, the 9th East Asia Summit Foreign Ministers' Meeting (EAS FMM), 26th ASEAN Regional Forum (ARF) and the 10th Mekong Ganga Cooperation (MGC) Ministerial Meeting, which will be held on August 1 and 2.