The accident at a warehouse could slow the production of centrifuges used to enrich uranium. 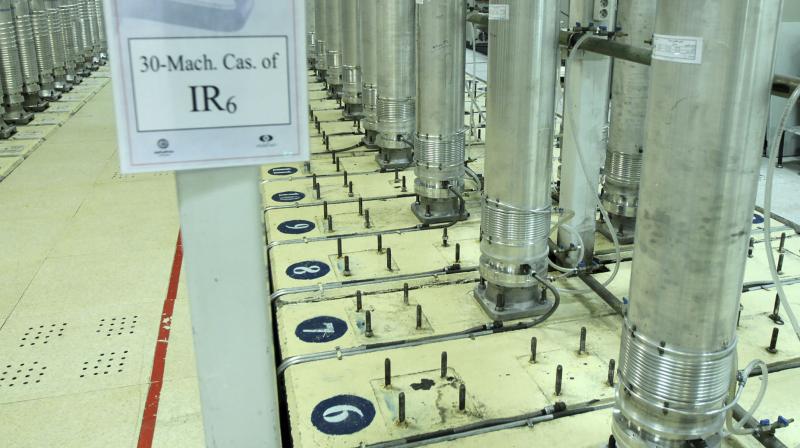 A nuclear accord with the US signed in 2015 by the Obama administration, under which Iran would stop all nuclear activity, was unilaterally abandoned by the Trump administration in 2018. Since September 2019, Iran began enriching uranium at the Natanz facility, where the accident took place on Thursday. This photo released Nov. 5, 2019, by the Atomic Energy Organization of Iran, shows centrifuge machines in the Natanz uranium enrichment facility in central Iran. (Photo | AP)

Tehran: An accident at a nuclear complex in Iran caused significant damage and could slow the production of centrifuges used to enrich uranium, the country’s atomic energy spokesman said.

The incident happened on Thursday at a warehouse under construction at the Natanz complex in central Iran, but caused no casualties or radioactive pollution, according to the Islamic republic’s nuclear body.

Security officials called it an accident and said they had determined the cause, without providing any further explanation.

“There were no victims... but the damage is significant on a financial level,” Iranian Atomic Energy Organisation spokesman Behrouz Kamalvandi said in an interview published Sunday by state news agency IRNA.

“In the medium term, this accident could slow down the development and production” of advanced centrifuges, he said. Natanz is one of Iran’s main uranium enrichment plants.

“God willing, and with constant effort... we will compensate for this slowdown so that the rebuilt site will have even more capacity than before,” Kamalvandi added.

The organisation had earlier released a photo purportedly from the site, showing a one-storey building with a damaged roof, walls apparently blackened by fire and doors hanging off their hinges as if blown out from the inside.

State TV later showed the building from a different angle with minor damage to its walls.

Tehran announced in May last year it would progressively suspend certain commitments under a 2015 nuclear deal with major powers, which the United States unilaterally abandoned in 2018.

Iran restarted enriching uranium at Natanz last September, despite having agreed under the accord to put such activities there on hold. Tehran has always denied its nuclear programme has any military dimension.