Manoj Ladwa, the writer, credited Modi’s emergence as a unifier to his origins in backward class. 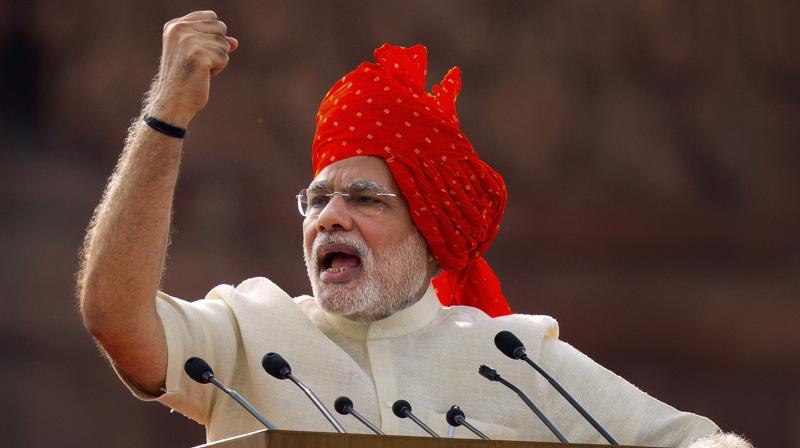 The pre-election cover by Aatish Taseer was acclaimed by Modis’ critics as “divider” by a global media powerhouse. (Photo:AP)

New York: After publishing a much controversial cover before the Lok Sabha elections calling Prime Minister Narendra Modi the ‘Divider in Chief’, TIME magazine has now ran a report with a headline, “Modi has United India like no Prime Minister in decades”.

The article featured on its website on Tuesday asked, “How has he not only managed to keep power, but increase his levels of support?” and answered: “A key factor is Modi has managed to transform India’s greatest fault line; the class divide.”

Manoj Ladwa, the writer, credited Modi’s emergence as a unifier to his origins in backward class – something which is purposefully omitted by Western media who are mainly obsessed with what they call upper caste domination.

“Narendra Modi belonged to India’ most disadvantaged social group,” he said. “In reaching the very top, he shows the hunger of the working class to reach the very top of the food chain, and can self identify with the country’s poorest citizens in a way Gandhi-Nehru political dynasty, who led India for much of the years after independence simply cannot.”

“Despite the strong and often flawed criticisms hurled at Modi’s policies both throughout his first tenure and during the mammoth election, no PM has united Indians as much as him in five decades,” taking a swipe at Indira Gandhi’s massive 1971 win.

The pre-election cover by Aatish Taseer was acclaimed by Modis’ critics as “divider” by a global media powerhouse. Time Magazine was bought in September to tech entrepreneur Marc Benioff, the founder of Salesforce and his wife. Though, United States edition did not bother to run the Modi story. They instead gave the space to Elizabeth Warren, a candidate for the Democratic Party's presidential nomination for president.

Aatish Taseer, son of Indian journalist Tavleen Singh and the late Salmaan Taseer, the governor of Pakistan’s Punjab province, wrote, in the cover story, “Not only has Modi’s economic miracle failed to materialise, he has also helped create an atmosphere of poisonous religious nationalism in India."

In the latest story, Ladwa writes: "Through socially progressive policies, he has brought many Indians, both Hindus and religious minorities, out of poverty at a faster rate than in any previous generation." Ladwa is the founder and CEO of Britain-based media company India Inc., which publishes India Global Business.