Duke of Sussex, who became a father in early May, met the Trumps at the Buckingham Palace. 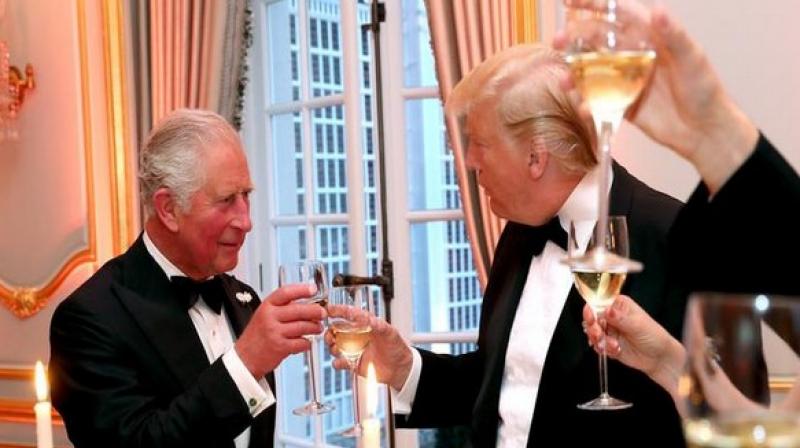 Donald and Melania Trump were accompanied by their children- Ivanka, Donald TrumpJr., Tiffany and Eric. Ivanka and Eric were present with their partners Jared Kushner and Lara Trump, respectively. (Photo: ANI)

London: A day after attending a state banquet hosted by Queen Elizabeth II at the Buckingham Palace, the Trumps on Tuesday reciprocated the hospitality by hosting a return banquet for the Prince of Wales and Duchess of Cornwall.

US President Donald Trump and First Lady Melania were joined by Prince Charles and Camilla for a lavish dinner at the residence of US' Ambassador to the United Kingdom on Tuesday.

The US President greeted the prince with a handshake after the Marine guards opened the door to the royal car outside the residence.

"President @realdonaldtrump and @FLOTUS welcome The Prince of Wales and The Duchess of Cornwall as they arrive at Winfield House for the return banquet. #USStateVisit," envoy Woody Johnson tweeted.

The menu, which was stamped with a gold presidential seal and posted on social media, included three courses. The main course included grilled filet of beef, Pommes Anna, watercress puree, celeriac, and Chantenay carrots and was served with a 2016 Iron Horse Pinot Noir, Fox News reported.

The Trumps, who are on a three-day visit, were welcomed for a State Banquet on Monday, hosted by Queen Elizabeth II. Duke and Duchess of Cambridge, Prince William, and Kate Middleton, Prince Charles, Camilla, Duchess of Cornwall, Prime Minister Theresa May, and Treasure Secretary Steve Mnuchin were among the few who attended the banquet.

Donald and Melania Trump were accompanied by their children- Ivanka, Donald TrumpJr., Tiffany and Eric. Ivanka and Eric were present with their partners Jared Kushner and Lara Trump, respectively.

Duke of Sussex, who became a father in early May, met the Trumps at the Buckingham Palace. Duchess of Sussex, Meghan Markle who is on maternity leave, wasn't present at the event.