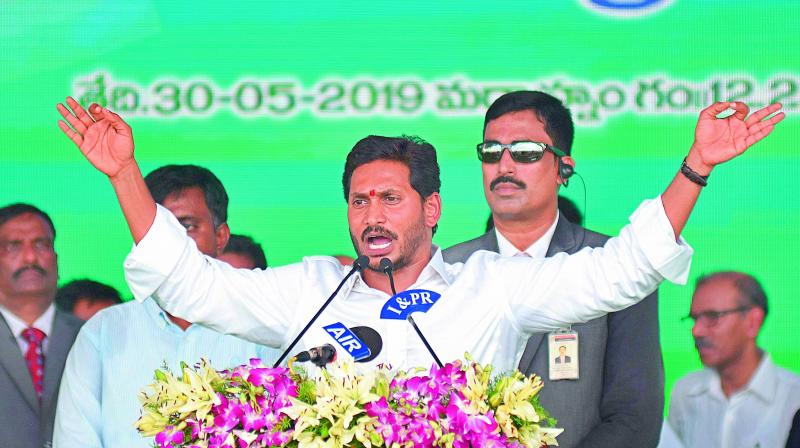 This (election manifesto) is the Bhagavad Gita, Bible and Quran for me, my party workers and my government functionaries,” announced Chief Minister Y.S. Jagan Mohan Reddy, showing a single sheet of paper to thousands of his jubilant followers who were cheering him at his swearing-in ceremony in May last year.

On the day Mr Jagan Mohan Reddy released the YSR Congress manifesto, a few months earlier, he had highlighted how brief the manifesto was. All promises were listed in a single sheet of paper unlike the booklets that other political parties print to showcase their promises to people.

The nine promises, for which his poll managers coined the term ‘Navaratnalu’ or nine gems, created unprecedented hope among the Andhra Pradesh electorate as was evident from the massive mandate they gave Mr Jagan Mohan Reddy — 151 Assembly seats out of 175 and 22 Lok Sabha seats out of 25.

Is implementation of the welfare initiatives as simple as compiling them on a single sheet of paper?

Does Mr Jagan Mohan Reddy have a philosophy behind these initiatives and a long-term vision to realise them, or has it been done with an eye on the 2024 general elections? Will these freebies, as a non-beneficiary of these initiatives rues, ruin the work culture or actually help the wheel of economic activity turn? These are some of the questions facing the Chief Minister.

The nine initiatives can be summarised as follows:

Except for irrigation projects and prohibition, the rest of the promises fall in the category of direct benefit transfer, or cash incentive in general terms, that would roughly take about `30,000 crore of the state Budget every year. Some of the initiatives are part of existing schemes, some are centrally-sponsored and others are the Chief Minister’s brainchild, but all bear his imprint either in terms of enhanced allocations or improved implementation methodology.

For instance, Basavaraju Prasada Rao, a septuagenarian from Nellore district, to his pleasant surprise found a state-appointed volunteer handing over his senior citizen’s pension of `2,250 at his doorstep relieving him of the burden of either depending on his children to draw money from the bank and bear silently with the pilferage or go all the way to the local office to collect pension. Like him, about 59 lakh pensioners receive money at their doorstep every month.

Similarly, Kamalamma, a native of Madakasira in Anantapur district, died of cancer when a hospital in Hyderabad refused to honour the health insurance scheme of the then AP government as it was applicable only in Andhra Pradesh. Another cancer patient, Raghavendra Prasad of Kovurnagar in the same district, was fortunate enough to get treatment in Bengaluru, which is close by, after Mr Jagan Mohan Reddy extended the Aarogyasri health insurance to cover medical treatment availed outside the state.

According to Team Jagan, the 3,648-km padayatra covering the length and breadth of the state in 341 days perhaps gave a new dimension to the thoughts of Mr Jagan Mohan Reddy, then Leader of the Opposition. The extra mile he walked more than his father and late chief minister Dr Y.S. Rajasekhar Reddy did translate into an extra thrust on addressing the problems from the roots while attending to the people’s immediate needs. “Our focus is to handhold a generation to prosperity,” explains Mr G.V.D. Krishna Mohan, State Communications Adviser. Children who just join school today have to study for at least 20 years and equip themselves to face the world in 2040 and beyond. “We can’t even imagine how the world would have technologically advanced,” he adds.

The Chief Minister, according to his aides, realised that the failure to invest in building human capital left the country behind China, which was on par with India way back in 1981 on all parameters of development but went on to achieve five times India’s GDP by investing in education and health.

The so-called free market economies like the US bear 48 per cent of the health cost, and 22 per cent of the UK Budget goes only to government hospitals, he said adding that spending on health is an investment in human capital.

In various review meetings, the Chief Minister has attributed the perennial problem of poverty to the ever-increasing health cost of people of which only 20 per cent is borne by the government. This is apparently to defend his focus on huge spending on Aarogyasri and extending the health care benefit not just to the Below Poverty Line families but all those whose annual income is less than `5 lakh per annum.

According to the health indices released by the Centre, AP fared badly in various parameters including 30 per cent premature marriages of women and 25 per cent teen pregnancies. Lack of access to proper medicare still kept infant mortality at a high rate of 34 out of 1,000.

Contrary to the general perception, Andhra Pradesh fares poorly in education parameters. “For instance, the gross enrolment ratio in elementary education during Mr Chandrababu Naidu’s regime was 83.2 per cent, far below the national average of 96.9 per cent,” says Mr Duvvuri.

An expert in finance and energy sectors, he was part of the Chief Minister’s think tank that was involved in drafting the manifesto. Incidentally, his father D. Somayajulu rendered similar services to Dr Rajasekhar Reddy.

Explaining the philosophy behind the YSR Congress government’s flagship programmes, Mr Duvvuri says making English medium of instruction compulsory in elementary education, Nadu-Nedu (now and then) a programme aimed at improving the infrastructure in schools, Amma Vodi, a `15,000 per annum cash incentive to  mothers and fee reimbursement are investments on a generation.

Notwithstanding dues of crores of rupees to the agencies providing the mid-day meal scheme, the Chief Minister changed the menu to make it tastier and healthier.

“We have witnessed a nine per cent increase in attendance last month after changing the menu,” says Ch Sridhar, director of the mid-day meal scheme in the school education department.

As per the rural finance inclusion report of the Nabard, the average monthly income and expenditure of farmers in Andhra Pradesh hovered at about `5,200 between 2014 and 2019 and the disposable surplus income with farmers was almost nil.

On the other hand, the ratio of indebtedness is as high as 77 per cent against the national average of 47 per cent.

While Dr Rajasekhar Reddy ushered in a new concept of free power to the farm sector, successive governments including that of Mr Naidu, who once was a hard critic of the initiative, were left with no option but to continue the programme.

Mr Jagan Mohan Reddy has come up with a proposal to build 10,000 MW solar power capacity to meet the needs of the farm sector apart from providing cash incentive of `13,500 per acre every year under the Rythu Bharosa scheme to 46.5 lakh farmers.

Immediately after the gruesome rape and murder of a veterinary student in Hyderabad, the Chief Minister brought out the Disha initiative to ensure speedy justice to victims and tougher punishment to ensure safety of women. To everyone’s surprise, the emotionally charged Chief Minister announced in the Assembly his appreciation of his Telangana counterpart K. Chandrasekhar Rao and the police for delivering instant justice by killing the four accused in the Disha rape and murder. “The father of two girl children, he was emotionally upset on the increasing incidence of attacks on women and children,” home minister M. Sucharita points out. Many of the welfare initiatives are women-centric in that the cash incentives will go to women who the Chief Minister has repeatedly said in public speeches would be more concerned and judicious in spending.

Despite the state reeling under severe financial crunch, the Chief Minister is keen on achieving total prohibition in a phased manner with the strong belief that it improves the living standards of a family.

The efforts are yielding results, with the consumption of liquor going down by at least 25 per cent.

“The government took over the retail sale of liquor in October last and consumption since then till the end of February was 117.55 lakh cases. This was against 154.79 lakh cases for the corresponding period in 2018-2019,” says D. Vasudeva Reddy, managing director of AP Beverages Corporation Limited.