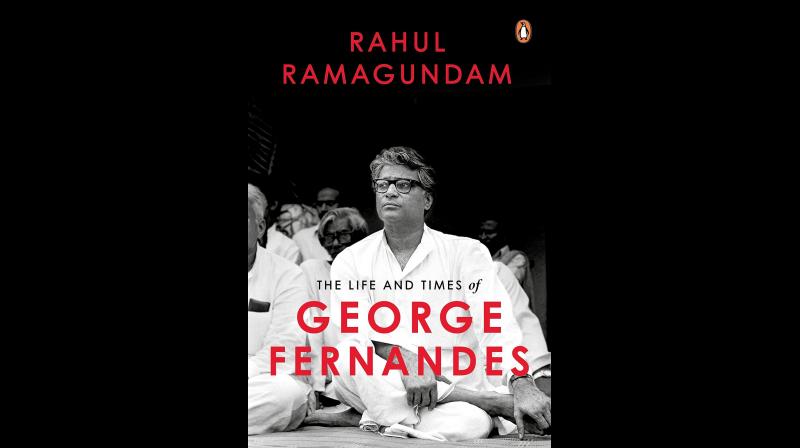 It will be tempting for many to read this biography of George Fernandes without noticing the author’s caveats about the difficulties and dangers of writing about an Indian politician, especially when it comes to oral testimony. He writes: “Oral testimonies become hard to completely rely on as historical evidence. They however made the narration colourful, and if they did correspond with other more verifiable evidence, they acquired the weight of being a historical fact.” Secondly, the author has tried to tell the life story from the inside as it were, an empathetic act. He says, “I have tried to present an insider’s account though I have not had any fleeting proximity to those processes.” This is indeed a slippery track, and the author does not overdo the insider act. And most importantly, he tried to construct the times to provide the broader context of George Fernandes’ life, which meant telling two broad stories, the trades union politics of the 1950s through 1970s, and the vicissitudes of the Socialist Party in the same period. These two aspects of Indian politics after Independence have been forgotten, willfully or otherwise.

It is difficult not to admire George Fernandes knowing fully well the flaws and contradictions in the man. Through all his faults and faltering he comes through as an honest politician who did what he did because he believed that it was the right thing to do at that moment. His political baptism begins with trade union activity in Mangalore, and he continues with it in Bombay/Mumbai when he moves there in the 1950s, working his way through the dock workers union to the taxi drivers’ union to the Bombay Labour Union. The trade union activity culminates when he is elected the president All India Railwaymen’sFederation (AIRF). In tandem, he takes his political steps by getting elected to the Bombay Municipal Council and he displays his infuriating rebelliousness in insisting on speaking in Marathi when the proceedings at the time in the council were in English. Perhaps it is this adolescent streak that came in the way of him becoming a mature national leader. But in a way it was a blessing in disguise because there was need for a fiercely individualist politician. The Railway strike of 1974 was the defining moment, but Ramagundam meticulously details the dynamics of the unions and how the decision to strike was made by the national coordination committee. Was it the trigger for the 1975 Emergency? In the White Paper the government put out, the railway strike of May 1974 was cited as one of the reasons for the need to impose the Emergency. Of course, the politician that she was, Indira Gandhi shifted her position. But she made a scandalous charge that the strike got funding from foreign sources. She would make a similar charge against Jayaprakash Narayan that he lived off on funds given him. It provoked JP to write an anguished protest letter to her. Fernandes just hit back at her calling her “Madam Dictator”. The author records Fernandes’ disappointment that the railway men did not step out to oppose the Emergency. The author notes based on Fernandes’ underground pamphlets addressed to the workers: “…George’s repeated overtures to the railway workers did not stir the ‘sleeping giant’, tranquilised by the dose of ‘order’ that Indira Gandhi had administered. The organisation of the AIRF had come to a complete standstill. Fearing retribution, some branches had even downed shutters.The workers were behaving like ‘frightened chickens’…The indifference of the working class to building resistance against the Emergency was a painful revelation.” The author gives a detailed account of the plan of Fernandes to use dynamite sticks to blow up bridges and tracks in imitation of the 1942 underground resistance, which was unearthed in no time. Ramagundam gives a weak rationalisation of the underground resistance that Fernandes wanted to organize in the dark days of the Emergency. When JP and others tried to dissuade him, he taunted them with what they did in 1942.

There is an inner core of Fernandes which is Christian in a moral sense. He felt that he was guided by a force beyond home to engage in his political activity with conviction. And he was not afraid of saying it out as he did at the Moral Re-Armament (MRA) conference he had attended in the 1950s or in a letter he wrote to Leila Fernandes during the Emergency. Fernandes wrote: “These eleven months of underground life have given me further evidence of the working of God’s hand in most of what I am doing. But for His protecting hand, I should not have been around.” It is a brave man who dares bare his soul. George Fernandes is the last of our political heroes. He acted with conviction even when he took a wrong turn.