'Over the Edge' is like having an entire meal of short-eats or starters, each snack is fulfilling and tasty by itself 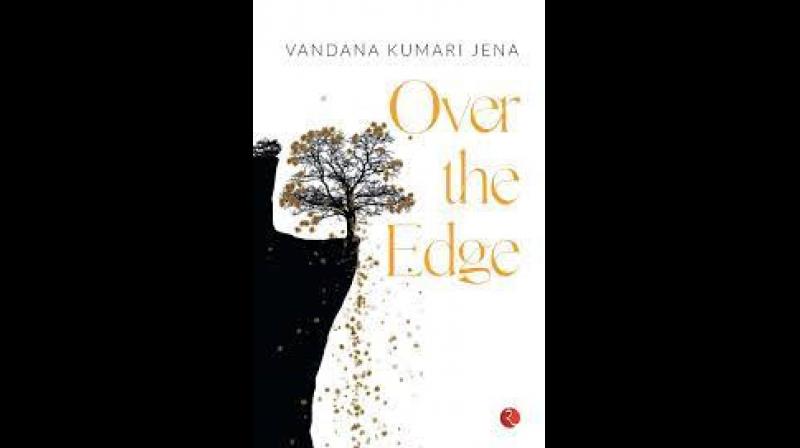 'Over the Edge' By Vandana Kumari Jena. (Image by arrangement)

The 24 stories all beg to be reread and their protagonists are the kind who charm the reader to follow them till the last word.

One of the best things about this collection is that the short stories embrace the confines of shortness, yet the denouement is satisfactory and all the loose ends are neatly tied up together. Though I did feel a slight pang of disappointment at the way one story ended (call it the hazards of being a writer who loves to write short stories), but frankly speaking the resolution is always a writer’s prerogative and Jena had the right to end her story the way she deemed fit. I kept thinking that I would have given it a different ending.But Jena’s ending was better.

Over the Edge which is also the title of the first story where Manisha a woman in her thirties is sitting at the havan for her departed husband Rahul. While the pandit is chanting the mantras, there are whispers that Manisha killed her husband. Manisha’s mind meanders and a series of flashbacks takes the reader into the heart of the accident which caused Rahul’s premature death at the age of thirty-seven. The ending of this story made me sit up, it also made me eager to read the next story. It was a perfect starter to kickstart the feast that was to follow.

The next story “A Storm Is Brewing” was another mind-pleaser. It had me widening my eyes in surprise at the twists and turns of Jena’s pen. I relish short stories, actually I devour them like a story monster. I was eager to read the rest.

Another story I enjoyed was “Queen for a Day” where a twenty-one-year-old girl named Kriti who cleans toilets in the airport, finds a boarding pass. Kriti on an impulse boards the aircraft and what follows next bestows a unique experience on her.

“Essence of a Woman” had a thriller feel to it. I liked the suspense and the ending a lot. The story titled “Coma” also embraced the thriller genre. It starts with a young boy waking up from a two-month long coma and what follows next will have the readers intrigued as well as surprised. Why did the boy go into coma? Who are the people beside him when he awakens? What is the boy’s name? Jena answers each question like she is peeling an onion, layer by layer, making the boy’s memory return one at a time, so that the reader isn’t overwhelmed but intrigued with the information.

The story “Hell Hath No Fury” takes place in an air-conditioned train compartment. After The Storm is a family story. “The Betrayal” is a mother-son story. It could have fallen into the stereotype of children mistreating their parents, if not for the ending. That lifted the story into the land of the contemporary.

“Eureka Moments” is about a lawyer trying to solve the case of a well-known painter Suchitra found dead in her farmhouse. Does he get his “Eureka Moments”? Read the story to find out.

I was smiling after I read “The Ambush”. Jena’s stories are like a well-made plait, pleasing to the senses and devoid of stray bits that take away from its neatness.

Jena doesn’t dilly dally with her stories. Right from the start of each story, she has her eyes firmly on the finishing line, like an athlete participating in 100-metre race. That’s why her stories don’t stray or meander, but reach their bullseye. Grab this platter of starters.