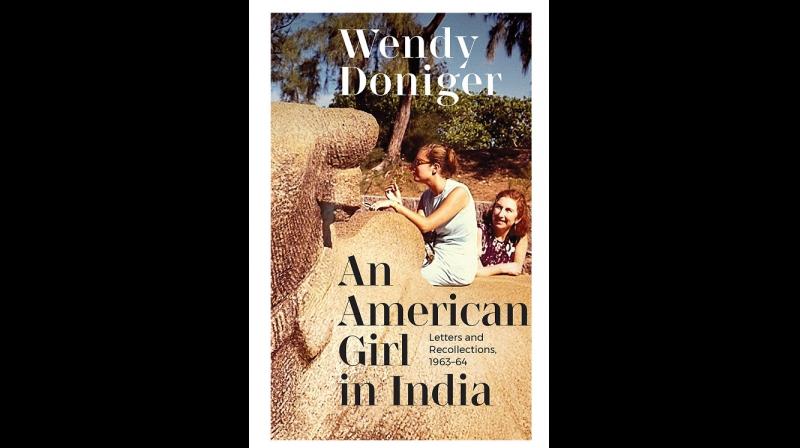 Coverpage of 'An American Girl in India'. (By Arrangement)

In August of 1963, when I was twenty two, just one year past my graduation from Radcliffe College, I landed in what was then called Calcutta (now called Kolkata) on my first trip to India. I had a year’s grant to study Sanskrit and Bangla (which we then called Bengali), the language of Bengal.

Fast forward. In January of 2019, when I was seventy-eight and had just retired after forty years of teaching at the University of Chicago, I was clearing out my office in the Divinity School and came upon a box of letters tucked away behind a cabinet. I opened one of the letters, and read, “Calcutta, December 10, 1963. Dear Mommy and Daddy…”

This book is an annotated edition of those parts of these thirty-three long letters that discuss my experiences in and thoughts about India at that time.

My Harvard professor and mentor, Daniel H.H. Ingalls, had very old-fashioned ideas about women (and much else) and was concerned for my safety during my year abroad. So he arranged for me to live in Shantiniketan (‘Abode of Peace’), a school situated in the countryside near the tiny village of Bolpur in the district of Birbhum in what became, after Partition, West Bengal, some 95 miles (or 152 kilometres) north of Calcutta. Rabindranath Tagore had settled there in 1901 on land that his father, Debendranath Tagore, had bought in 1863. In 1951, Shantiniketan had become a university, Visva-Bharati (‘All India’). By 1963, it had become in part a finishing school for upper-class Bengali girls, and Ingalls thought I would be safe and happy there.

Eventually I left Shantiniketan to live in Calcutta, where I stayed in the home of Edward Cameron Dimock and his wife Lorraine and five children. (With the serendipity that was to halo me throughout my time in India, I just happened to meet the Dimock family on my flight from London to Calcutta [see the letter of August 15, 1963].) Dimock, a professor of Bengali at the University of Chicago, was the director of the American Institute of Indian Studies, which had funded my year in India. The Dimock family apartment, at 12/2 Swinhoe Street, Calcutta-19 (the section known as Ballygunge, in south Calcutta), was also the headquarters of the AIIS. Years later, in 1978, I joined Dimock at the University of Chicago, where he headed the Department of South Asian Languages and Civilizations and I became a professor myself. He retired in 1993 and moved to Cape Cod, where I too had a summer house, and we met there often, until his death in 2001.

There is one story about Ed Dimock that he told me, during the Chicago years, long after we had both left Calcutta, a story that I’ve always loved and that tells a great deal about the sort of man he was, though he always used to tell it as a parable about the importance of learning foreign languages well. It seems that on one of their trips to India, at the end of the long series of flights from Chicago to Calcutta (changing at Reykjavik, Frankfurt, Beirut, etc.), the Dimocks (Ed, Lorraine, and five children under the age of ten) finally made their way to the Swinhoe Street house in the middle of the night. The house was locked, in total darkness, and there was no one there to let them in. The five children had wet themselves, soiled themselves, thrown up on themselves, and were now bawling with exhaustion. Ed finally managed to rouse the chowkidar (janitor/doorman), and when the man arrived Ed simply lost it, and let loose with a string of Bengali invectives. Finally he ran out of breath and immediately regretted his outburst; the chowkidar was, after all, not the problem, and Ed, a kindly soul and a Unitarian minister to boot, was truly sorry that he had offended an innocent man. But before he could catch his breath to apologise, the chowkidar said, “Sir, how well you speak Bengali! (Shaheb, ki bhaalo Bangla bolte paaren!)”

I myself had an adventure in India that similarly proved the advantages of linguistic training, an event that I failed to report in my letters. When I was in Benares I stayed at Clark’s Hotel, the big old colonial hotel, which apparently branded me as a certain sort of tourist. And so, whenever I left the hotel, I was mobbed by men trying to sell me all sorts of tourist junk I didn’t want, and when I went to the shops that sold paintings, they showed me only the badly executed modern copies of the old paintings. On one occasion, I happened to turn the picture over and read the Sanskrit inscription out loud and translated it. ‘Oh!’ said the shopkeeper. ‘You know Sanskrit!’ And immediately he ordered tea to be brought for me and also brought out the folders with the genuine old paintings.

There is also a great story about Lorraine Dimock that somehow never found its way into my letters. Ed was in the habit of inviting home to dinner anyone that he became interested in, and Lorraine had to feed them, on what were always fairly short rations which became, during the years building up to the India-Pakistan War of 1965, very short rations indeed. One day Ed announced that he had invited a Hindu, a Muslim, a Jew, and a Catholic to dinner (it does sound like the beginning of a joke), and Lorraine had to produce a meal without offending any of them. She invited them for a Friday and served pork, which was equally taboo to all of them (the Hindu a vegetarian, the Jew and Muslim forbidden to eat pig, and the Catholic still observing the meatless Friday rule). No one was offended, as all were equally offended, and they all ate everything.

- Excerpted from An American Girl in India: Letters and Recollections, 1963-64 (Speaking Tiger)

An American Girl in India