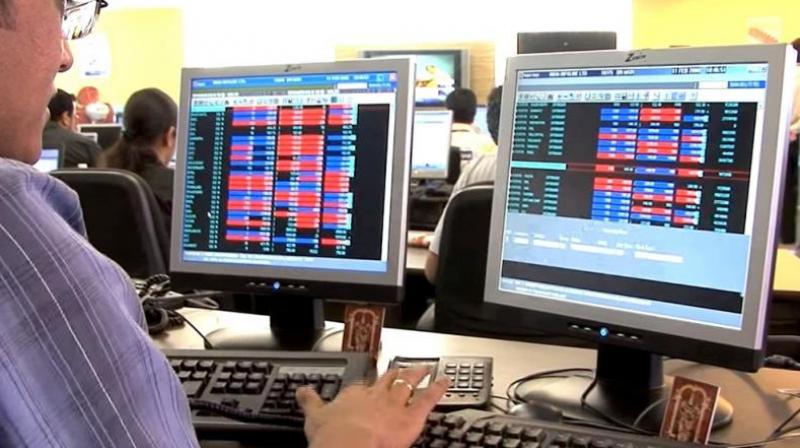 Also, a weak trend in other Asian bourses weighed on domestic investor sentiment.

On the other hand, ONGC was the biggest gainer in the Sensex pack, rallying over 6 per cent, after the state-owned company Thursday reported a 65 per cent jump in its third quarter net profit as higher prices made up for a fall in oil output.

Other gainers include NTPC, PowerGrid, Coal India, L&T and ICICI Bank, rising up to 5.60 per cent

Sectoral indices led by healthcare, metal, banking, auto and realty were trading in the negative terrain, falling by up to 1.20 per cent.

However, oil and gas, IT and power indices rose up to 0.82 per cent.

The global benchmark, Brent crude was trading 0.63 per cent higher at USD 65.04 per barrel.

"Wholesale price index (WPI) numbers came in at 2.76 per cent in January against 3.8 per cent in December. The decline in inflation may further increase the probability of the Reserve Bank of India to cut interest rates in the coming months," said Hemang Jani, Head - Advisory, Sharekhan by BNP Paribas.

Q3FY19 earnings so far have been lacklustre. The general elections will play a crucial role in the short term; and as we move closer to the elections one can expect the volatility in the market to only increase, he added.

Global investor sentiment was also dampened after US retail sales recorded its biggest drop since 2009, raising fresh doubts about the strength of the US economy, offsetting optimism on trade talks between the US and China, brokers said.

In the Asian region, Hong Kong's Hang Seng fell 0.85 per cent and Japan's Nikkei shed 1.20 per cent, Shanghai Composite Index was down 0.57 per cent and Korea's Kospi cracked 1.52 per cent.