In an earlier draft of Baazigar, Kajol’s character Priya was supposed to kill Shah Rukh’s Ajay. 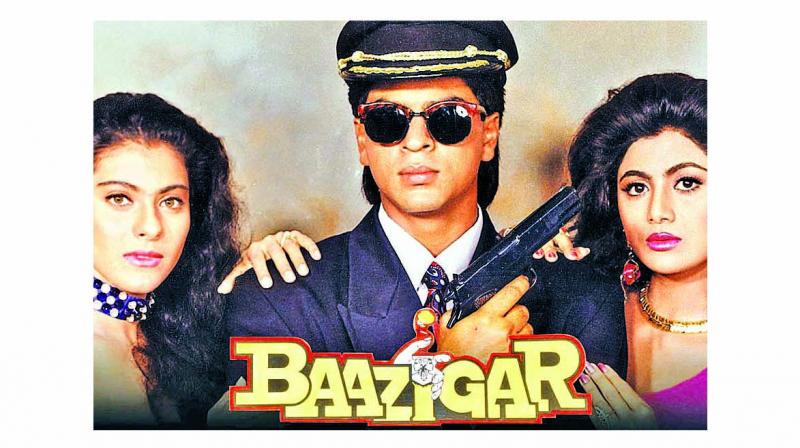 Shah Rukh Khan, at this stage in life, doesn’t want to play a negative character, a role he aced in one of his initial films. We are talking about Abbas Mustan’s Baazigar (1993) that made him an overnight superstar.

Recently, speculations about Shah Rukh Khan playing Mogambo to Ranveer Singh’s Mr India went viral, but thankfully, this turned out to be a wishful thinking. Sources say Khan turned down the role of Mogambo, knowing very well that it would be foolhardy of him to take on an iconic role which late actor Amrish Puri immortalised. Also, Khan, at this stage in life, doesn’t want to play a negative character, a role he aced in one of his initial films. We are talking about Abbas Mustan’s Baazigar (1993) that made him an overnight superstar.

Before signing Khan, the team had a tough time convincing actors to come on board for a role where the hero commits three murders on the go. “We went to Anil Kapoor who was reigning at the box-office then. He thought it was too negative for him. Salman Khan was excited about the script but he was doing a Rajashri film,” remembers the film’s director Abbas Burmawala adding that there was an additional pressure on them for killing the hero in the end. Dilip Tahil who played Ajay’s nemesis Madan Chopra recalls,“On watching the rushes, the distributors couldn't believe that the hero killed one of his leading ladies. Many predicted that the film would bomb. To be honest, when I saw the scene where he throws Shilpa off the terrace, I was a little worried. It defied all the laws of filmmaking. Raj Kapoor had famously said that 'you should never kill young love' but Shah Rukh was confident and stuck to his conviction. He told all of us to not worry about the success of the film.”

The film was inspired by the 1956 Hollywood thriller A Kiss Before Dying. But unlike the original plot where his character murders for money, the film was to be adapted for Indian audiences as a revenge drama. “Distributers were apprehensive whether the film will work with SRK’s dying. In the earlier version, Kajol's character was supposed to kill Ajay, which would be similar to the Hollywood film's plot,” adds Burmawala.

The directors had also decided to cast Sridevi for both the roles—Kajol’s and Shilpa’s but later, decided to go for fresh faces. “Sridevi was at her career’s peak then and if we have to throw her off the cliff, it won’t go down well with the audience and the sympathies would be towards her, not the hero.”