It was director Rajamouli who showered praise on her at the pre-release event. 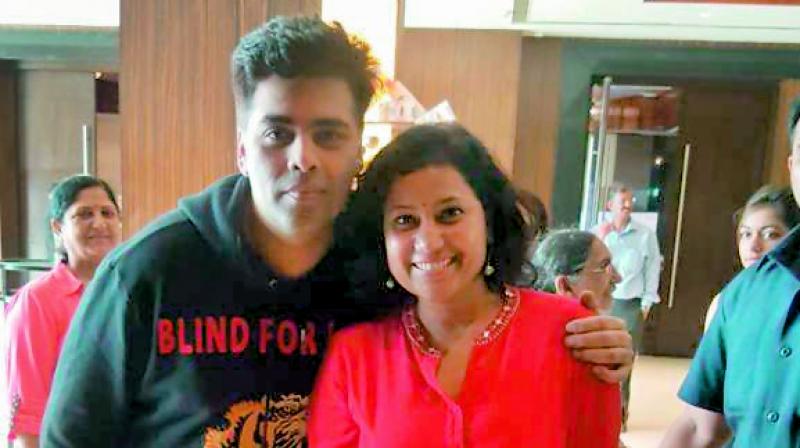 Baahubali: The Conclusion has created history in Indian cinema, and several women like Rama Rajamouli, Sri Valli, Prashanthi, and Lakshmi have scripted its success story. Yet another woman who played a key role in the success of the Hindi version of the film is Devika Bahudhanam, who’s always maintained a low profile. It was director Rajamouli who showered praise on her at the pre-release event.

Devika is no stranger to films. “I worked with Nagesh Kukunoor on all his films as an executive producer, production designer, second unit director, art director and in other roles as well,” says Devika, who was engaged in creative work right from her college days. After completing her graduation in 1998, she first worked as an apprentice to director Mani Shankar.

“I was born in Bhimavaram, but I studied in Hyderabad and was always interested in films,” she says. After working with Mani Shankar, Devika met Elahe Hiptoola. “She told Nagesh about me and I worked for the film Rockford, where I did everything, from production and art work to sweeping!” she reveals.

Nagesh liked Devika’s creative thought process. “Since he prefers to shoot in real locations, I scouted for many locations,” she recalls. She has worked on nearly 14 films with him, including Bollywood Calling, Dor, 3 Deewarein and Iqbal. She adds, “He always gave me the entire script so I could plan and design the film.” Without any formal training she says she learnt by observing the director.

It was after Iqbal that Devika met Shobhu Yarlagadda, the producer of Baahubali. “I joined the film in 2014,” says Devika, recalling, “I wanted to actually work on my own and spend time with my two kids. But Shobhu and Prasad Devineni said I could work on my own terms.”

Devika says she never wanted the film to look like a dubbed Hindi version. “I worked with the writer Manoj Muntashir and when the producers saw my involvement, they asked me to take charge,” she recalls. Finally, when Karan Johar and team saw the film, they were very happy with the output. “They wanted to see only ten minutes of the film, but they ended up watching all of it,” she says. Of all the compliments she’s received, Devika says those from Karan Johar, Prasad Devineni and S.S. Rajamouli were the best. “Karan said that he didn’t realise it was a dubbed film and that I’ve performed magic. Prasad Devineni attributed the success of the Hindi film to me and Rajamouli praised me at the pre-release event, which brought tears to my eyes,” she says and adds, “They  put crores into this project, but they were very calm. My journey with the team of Baahubali was great.” Devika has two kids. “My elder son is a special needs child. When I worked on this film, my mother took care of my kids,” she reveals. As for her future plans, Devika says that she wants to direct a film. “I am still working on  my script, but I’m looking forward to working again with the Baahubali producers,” she says. A special screening of the film was arranged for her family members. “Nearly a hundred people came to watch the special screening and they all praised me for my work,” she gushes.