When the professor talks about vagina, Uday reacts like a layman than a graduate in medicine and surgery 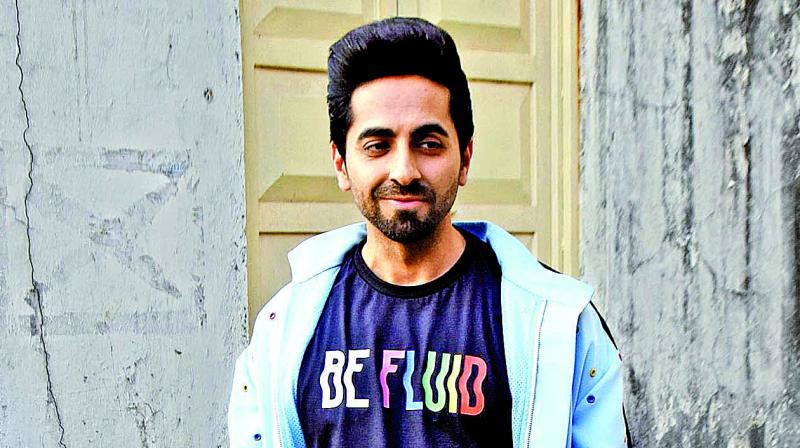 After the intermission, however, the film picks up pace and quality. Uday (Ayushmann Khurrana in picture) transforms from a misfit male gynaecologist to a man, who is willing to address immediate human challenges in the GynObs ward. — DC File Image

Typically, a film cannot be split into two halves in terms of quality
— pre-intermission and post-intermission. Anubhuti Kashyap’s film an
unwitting male gynaecologist goes against this rule. The movie is
tempered with mediocrity in the first half, while the second half
boasts of comparatively high quality content. The movie loiters in the
first half, aimlessly making one believe that Ayushman Khurana just
sheds synthetic tears and throws crass one-liners.

Uday Gupta (Ayushman Khurana) aspires to be an orthopedician but gets
a seat in the department of gynaecology and obstetrics in a local
government college. To make things worse for him, his boss is stern
and no-nonsense Nandini (Shefali Shaw). He suffers from further
ignominy, isolation and embarrassment when his classmates — aspiring
gynaecs such as Rakul Preet Singh and the YouTube sensation AiyyO
Shraddha — try to bully and rag him. Uday plays along as he sees
gynaecology as a stop gap before he can move to his desired
specialisation in bones and limbs.

When the professor talks about vagina, Uday reacts like a layman than
a graduate in medicine and surgery. The systemic gender challenges are
clichéd, but they are tad loud.  While women were gasping for breath
and weaning in pain, students behave like they are at a picnic.

After the intermission, however, the film picks up pace and quality.
Uday transforms from a misfit male gynaecologist to a man, who is
willing to address immediate human challenges in the GynObs ward. He
develops crush for classmate Sameera, only to realize later that she
was already engaged and wants him only as a friend. His single mother
Lakshmi Devi (Sheeba Chadda), on the other hand, fights hard to find
herself an identity and an emotional space (a repeat of Badhai Ho).

Uday, who faces multiple challenges, is forced to make decisions hard
and fast. His romance crashes, and faces issues on the domestic front.
The director has handled the latter part deftly and all artists have
performed well.

Rakul Preet Singh, who has large audience in the south, leaves a whiff
of fresh air. Even minor characters like Indranil Sen Gupta and Abhay
Misra impress audience with their performance. Sheeba Chadda performs
amazingly, as the single mother, tries to overcome middle-class blues
and middle-age inhibitions. She balances her lighter moments of
self-indulgence with the strong stand of her independent choices.

Ayushman Khurana literally grows to become the hero as the film
progresses. He literally evolves from an apologetic professional to
the man of convictions and decision making. He is exactly what the
audience have to expect of him. More than just an experimental actor,
gutsy and adventurous. He has the streak of the veteran, the
confidence of success backed by the fine understanding of the media.

The central piece in the film, however, is Shefali Shah, whose
performance is mind-boggling. She has the emotive capacity that is
reminiscent of all-time greats and is also in great form. Albeit
delayed, she is getting roles that justify her presence.

Doctor G gets to business late but once in form hits a great high both
in style and in content. The icing on the cake is, of course, the top
notch performances of Shefali Shah, Ayushman Khurana and Sheeba
Chadda. This Doctor’s treatment works slowly but cures effectively.