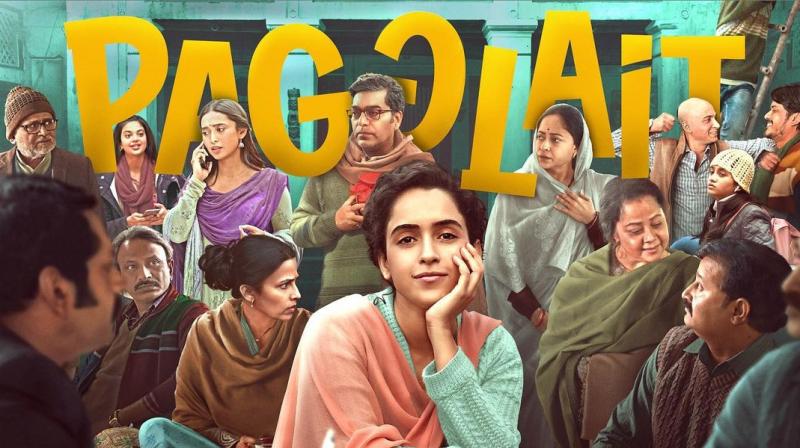 All deaths are not equal, not even of our loved ones. Some are devastating, debilitating, and stalk us for the entirety of our lives. But some deaths, even terribly tragic ones of our dearly beloved, can be liberating. They can set us free in ways we hadn’t even thought of.

Bollywood doesn’t like death. It prefers happy unions. That’s why many Bollywood films either open or close with a wide smile — boisterous, chaotic wedding scenes and baraatis dancing to bhol-baja.

Pagglait, written and directed by Umesh Bist, opens with death but on a naughty, slightly indecent note not befitting matam ka mahaul.

Sandhya (Sanya Malhotra) is the recently-wedded wife of Astik Giri, the executive who earned Rs 70,000 per month. She is the top floor resident of Shanti Kunj in Lucknow.

Pagglait opens on the day of Astik’s cremation and then stays on, like a significant relative, till the terahvin — the 13th day when the soul, as per Hindu beliefs, takes off heaven-wards.

Bist has a firm grip on how the rituals of bereavement are played out by relatives in Indian families.

Sitting immediately around the sad absence are the main mourners, and as this circle makes several concentric circles around them, it enlarges with progressively reducing grief. But Bist curdles the sanctum sanctorum of grief with Sandhya and her inability to feel sad.

Young Aksit’s father, Shailendra (Ashutosh Rana), and mother Usha (Sheeba), are stunned by the tragic loss of their son, but Sandhya is not even able to feign tears. Out of respect for others, she keeps her craving for chips and Pepsi to those who understand, Parchun (Aasif Khan) and her best friend, Nazia (Shruti Sharma).

Bollywood has been traveling out of the metros for a while and it has acquired confidence and a joyous cadence to tell the stories of close-knit families in small towns, making their small concerns, paise ke tanggi, routine bigotry and general small-mindedness endearing.

Bist uses the usual and adds a few new things to make the Giri parivaar real and believable.

A few of these strike discordant notes, but as a family living in a house with an Indian-style toilet, Bist’s look at the function of Indian dysfunctional families is wholesome and cuts close to the bone.

Pagglait’s setting, its characters, their sadness, banter, rituals, hypocrisy, everything rings true and has familiar familial warmth. It’s when Bist has to take the story forward that the plotting gets weak and cliched.

Sandhya’s lack of grief is nice, fresh, different. It also seems honest, appropriate. It’s a five-month-old arranged marriage, after all.

But Bist feels the need to give her indifference some moral underpinning — to justify it, so that she doesn’t seem totally heartless, but also for plotting reasons.

Sandhya finds a photograph, meets Aakanksha (Sayani Gupta) and sets out in search of truth, and to find a life for herself.

When it is in the house, Pagglait feels lived-in. The life insurance bit adds a nice twist to the story, but when the film ventures out, it feels dishonest, like regular filmy fare.

We never meet Astik. We don’t even know how he died and yet Umesh Bist creates a lovely world of Amma, Bapuji, Daadi, Parchun, and the relatives who have arrived to partake in the grief, settle grouses, take a piece of the pie. Shanti Nivas is so warm and entertaining that when Sandhya takes flight, you wonder what is wrong with her.

Sanya Malhotra is at the centre of Pagglait, and she is surrounded by an ensemble of daunting actors. And yet, in the midst of them all, she is able to hold her own.

Ashutosh Rana has the sort of screen presence that is rare. It’s impossible to take your eyes off him when he is on screen. Usually he is very high voltage. Here he is subtle, and there is both dignity and intensity in his grief.

Sheeba Chaddha as Usha, and Natasha Rastogi who plays Sandhya’s mother are both excellent. These three characters, along with Aasif Khan and Daadi, turn Pagglait into a welcoming home one can go to, just to get lost from the world for a bit.