The Skyesports League 2021 features a city-based model where eight teams will battle in Valorant for a share of the Rs. 15,00,000 prize pool 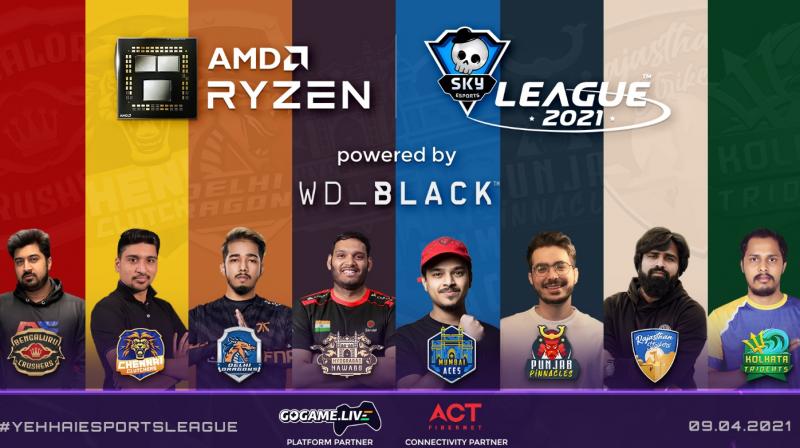 After a successful first edition of the Skyesports League, which was broadcasted across seven languages and amassed over 3.7 Million viewers, we are proud to announce that the league is returning in 2021.

The Skyesports League 2021 features a city-based model where eight teams will battle in Valorant for a share of the Rs. 15,00,000 prize pool — the biggest for Valorant esports in South Asia to date. Skyesports has continued its association with who are presenting and powering the tournament respectively. GOGAME has joined as the platform partner & ACT Broadband has joined as connectivity partner.

The Skyesports League 2021 continues to have teams from eight promiAMD Ryzen™ and WD Black,nent cities, namely Mumbai, Chennai, Kolkata, Bengaluru, Delhi, Punjab, Rajasthan, and defending champions Hyderabad. Each city was represented by a team owner who participated in the player auction on March 31 to select their roster.

Team owners bid for players/gamers from a pool of registered players and influencers in the auction. Each team players’ roster consists of 4 players and one content creator. Each team can have up to 10 players in order to complete their team slot. The league promises to have the most popular and influential gamers in India displaying their skills in Riot’s popular FPS.

The franchise owners for the Skyesports League 2021 are:

The teams will descend into the battlefield from April 9 for 55 days of non-stop action. They will compete in Valorant in a round-robin format with each team facing each other twice. It will be livestreamed on Skyesports’ YouTube channel in over six languages.

“The esports arena in India is only getting stronger and better with exciting tournaments like the AMD Ryzen Skyesports League 2021, which give immense opportunities to players to compete and push their boundaries with their smart gaming strategies”, shares Mukesh Bajpai, India Marketing Head, AMD.
“AMD has always empowered the gaming community with its Ryzen and Radeon products and technologies, allowing gamers to gain an edge when playing top esports titles.”

Jaganathan Chelliah, Director Marketing, India, Western Digital, said, “We are glad to associate with Skyesports League 2021 and look forward to an exciting 55-days intense gaming. At Western Digital, our constant endeavor to introduce innovative products from the WD_BLACK portfolio to enhanced gameplay. We wish each player luck, and may the best team win. Let the game begin!

SHAUN ENZO CREATING HIS OWN WORLD OF HIGH FASHION RAP