The duo has plans to release songs across various genres like classical, romantic, pensive, happy, and devotional 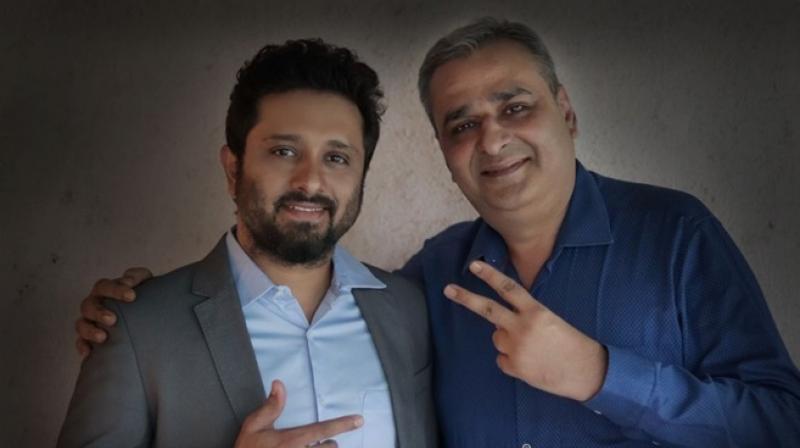 Jeswal and Amey connected over a common thought – everyone is nostalgic about music from the yesteryears but no one is producing it. (Photo by arrangement)

Deepak Jeswal has been a YouTube sensation for his profound lyrics and some melodious collaborations. He recently announced the commencement of his long-term association with ace singer Amey Date. The duo has plans to release songs across various genres like classical, romantic, pensive, happy, and devotional.

Jeswal and Amey connected over a common thought – everyone is nostalgic about music from the yesteryears but no one is producing it. They decided to put their heads together and recreate the magic of some gifted musicians the country has produced. They just finished the production of their first song Ae Deewane Dil which will port listeners to the golden days of R D Burman. The lyrics of the song have been written by Deepak Jeswal and sung by Amey Date. They requested Arnab Chatterjee to arrange the music and turned to the avant-garde director Ajinkya Deshmukh to create the music video.

Deepak has been an ardent follower of Bollywood music from the golden era. Being a lyricist, he always looked up to gifted lyricists like Shailendra, Hasrat Jaipuri, Gulzar, Anand Bakshi, SahirLudhianvi, MajroohSultanpuri, Indivar, Anjaan, Sameer, etc. He has many hits to his name and has worked with singers like Alka Yagnik, Anup Jalota, and Udit Narayan.  He considers Anand Bakshi as his ultimate ‘lyricist guru’ for he feels Bakshi could write lyrics for any situation with the perfect use of words and rhymes.

Amey Date gained popularity as a singer due to his performance in the live singing competition Rising Star on Colors TV and Indian Idol on Sony TV. Amey’s grandfather was a member of R D Burman’s orchestra and was introduced to music from a very young age. Trained under the singing sensation Suresh Wadkar, Amey also has a music academy where he teaches singing to young children.  Amey is gifted with a rich voice which he uses effectively to convey the correct emotions of the song. The music arranger Arnab Chatterjee has extensive experience as a music composer and arranger in music albums, TV serials, short films, corporate films, and full-length feature films.

The video director Ajinkya Deshmukh is a known Music Video and Ad Film Director working for the past 9 years in the film industry creating Ad Films, Music Videos, Documentaries and Corporate Films. Having worked with Renowned Production houses (like Red Chilies, Rajkumar Hirani Films, Bodhi Tree, Sagar Productions & many more) he is a creative and efficient individual, who is today capable to shoot and produce any kind of project with any level of production value with very competitive budgets with respect to the Cinematic quality.He has also recently directed and produced a Marathi feature film along with several music directors for channels like Sony Music, Zee, Etc.

The song Ae Deewane Dil was released by Jeswal on his YouTube channel ‘Deepak Jeswal Official’ on January 08, 2022, and managed to gather around 1.8 million views within 10 days of its release with nearly 11K likes. The song has been composed and written to re-create the R D Burman magic and Jeswal and the team ensured that they used acoustic and real musical instruments – a hallmark style of RD. Amey has managed to bring the lyrics to life and Ajinkya has delivered a video that is positive and shot at some virgin locations across Mumbai. The video stars two young and promising actors Nikhil Narang and Twinkle Saggu. The song is also made available on streaming platforms like Apple Music, Spotify, Amazon Music, JioSaavn, Resso, YouTube Music, etc.

All the professionals associated with the song namely Jeswal, Amey, Ajinkya, Arnab, and other musicians and technicians have done a commendable job to create this masterpiece. With the apparent success of Ae DeewaneDil, music fans will be eagerly awaiting the magic that the duo of Amey and Jeswal will create across genres.