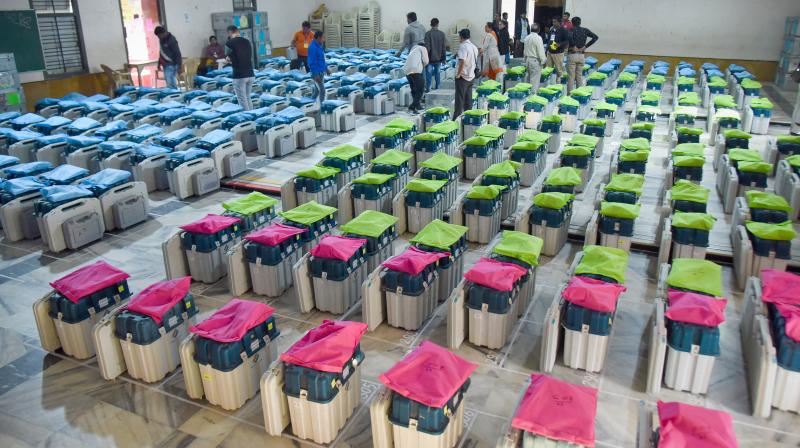 EVMs and other election material before being distributed to polling officials ahead of the first phase of Gujarat Assembly elections, in Rajkot. (PTI Photo)

NEW DELHI: The first phase of polling for the electoral battle in Gujarat will be held today (Thursday), covering 89 seats crucial for both the ruling BJP and the main Opposition Congress, which is trying its luck for the seventh time to unseat the ruling BJP in Prime Minister Narendra Modi's home state.

Though the border state has traditionally seen a bi-polar contest between the BJP and the Congress, the Arvind Kejriwal-led AAP has attempted to position itself as a credible opponent to the BJP, with which it is also fighting on another front: the upcoming municipal elections in the national capital.

For its part, the BJP has been downplaying the AAP's challenge in the state and projecting the Congress as its main rival. Senior BJP leader and Union home minister Amit Shah, in a media interview, claimed that the AAP may not even open its account. On Congress, Mr Shah said, "It is still the main Opposition party, but the party is going through a crisis and its impact is visible in Gujarat as well."

In the first phase of Gujarat Assembly elections, 788 candidates are running for 89 seats spread across 19 districts in Saurashtra-Kutch and southern parts of the state.

Of the 89 seats going to polls in the first phase, the BJP had won 48 in the 2017 Assembly election, the Congress had won 40 and one seat was bagged by an independent candidate. Saurashtra-Kutch and south Gujarat are considered the Congress's stronghold, with tribals being one of the core vote banks of the Opposition party.

Much to the relief of the BJP, unlike the last Assembly polls where it had to deal with demonetisation, agrarian crisis, Patidar quota agitation etc, the Opposition has no major issue in its arsenal to target the party’s government in the state.

To beat the anti-incumbency, the ruling party has already overhauled the government and changed most of the party’s MLAs, including the chief minister. Also, the BJP's decision to nominate the first tribal woman for the country's highest constitutional post, according to its feedback, has found "massive support" within the tribal belt of the state.

Among the prominent candidates whose luck will be decided during the first phase of voting are AAP state unit chief Gopal Italia, who is contesting from Katargam in Surat; Rivaba Jadeja, the wife of cricketer Ravindra Jadeja, who is contesting from Jamnagar (North); BJP MLAs Harsh Sanghavi and Purnesh Modi from different seats in Surat and five-time MLA Parshottam Solanki from Bhavnagar Rural. Seven-time MLA and veteran tribal leader Chhotu Vasava is contesting from Jhagadia in Bharuch. A five-time former MLA Kantilal Amrutiya, who saved several lives during the tragic Morbi bridge collapse, is also a prominent candidate.

In south Gujarat, the Congress in 2017 polls had improved its tally to 10 seats against six in the previous polls. The BJPs tally dropped to 25 seats in the last election from 28 seats earlier. South Gujarat also comprises Surat city with 12 seats, which have remained the BJP's bastion.

All the parties have been campaigning aggressively in the state. While the Prime Minister led the BJP's campaign in the state, Mr Kejariwal and Punjab chief minister Bhagwant Mann campaigned for the AAP. The Congress campaign was lacklustre compared to the previous Assembly election. Top guns of the party, including Mr Gandhi, who visited only once, remained missing from the state after the election schedule was announced.

Just ahead of the first phase of polling, the Congress approached the Election Commission, demanding that it enforce its notification and reprimand channels broadcasting region-wise opinion polls. A party spokesperson after meeting the EC said, "Some channels are indulging in putting out opinion polls almost 48 hours before Gujarat goes to the polls in the first phase and opinion polls that are giving region-wise predictions. It is very methodically done. It is almost like predicting what the results will be. This is nothing but a blatant and brazen attempt to influence the voting pattern and this weakens our democracy."