India   All India  03 Jul 2022  Non-inclusivity is an invitation to disaster, says CJI Ramana
India, All India 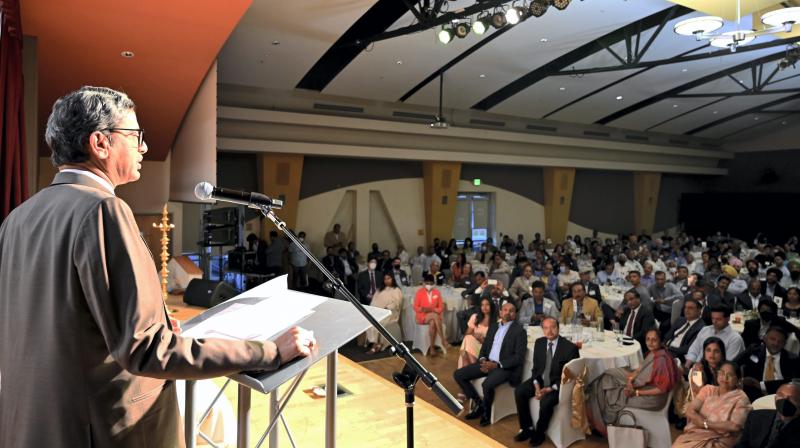 New Delhi: The Chief Justice of India, Justice N.V. Ramana, on Saturday said that there was no space for divisive, narrow, intolerant, and non-inclusive politically driven approach in the 21st century. He observed that any such approach, coupled with the absence of proper understanding of the constitution and the functioning of the democratic institutions amongst the people, is a sure recipe for disaster.

"In the 21st century, we cannot allow petty, narrow, and divisive issues to dictate human and societal relationships. We have to rise above all the divisive issues to remain focused on human development. A non-inclusive approach is an invitation to disaster," CJI said in his address at a function organised by the Association of Indo Americans in San Francisco, California, to felicitate him.

Justice Ramana said, "This principle of inclusivity is universal. It needs to be honoured everywhere in the world, including in India. Inclusivity strengthens the unity in society, which is key to peace and progress. We need to focus on issues that unite us. Not on those that divide us."

Justice Ramana’s observation comes close on the heels of the top court on Friday chastising the now suspended BJP spokesperson Nupur Sharma for her controversial remarks. A vacation bench of the Supreme Court said that "her loose tongue" has set the entire country on fire and is responsible for "unfortunate" incidents and violence in Udaipur.

Justice Ramana said, "We still haven’t learnt to appreciate wholly the roles and responsibilities assigned by the Constitution to each of the institutions."

Dwelling on the mindset that dictates both the ruling establishment and those in Opposition, Justice Ramana said, "The party in power believes that every governmental action is entitled to judicial endorsement. The parties in Opposition expect the judiciary to advance their political positions and causes."

This "flawed thinking" of all hues, Justice Ramana said, "flourishes in the absence of proper understanding among people about the Constitution and the functioning of the democratic institutions. It is the vigorously promoted ignorance among the general public which is coming to the aid of such forces whose only aim is to run down the only independent organ."

Speaking at the gathering of Indo America, CJI told the audience that they could come to America and make a mark for themselves only because "Unites States honours and respects diversity".

"This diversity needs to be honoured and cherished, everywhere in the world," CJI said.

Justice Ramana said, "It is the tolerance and inclusive nature of American society that is able to attract the best talents from all over the world, which in turn is contributing to its growth. Honouring qualified talents from diverse backgrounds is also essential to sustain confidence of all sections of society in the system."

Paying tributes to Indian voters CJI said, "Under the Constitution of India, it is the people who are entrusted with the task of passing judgment on the rulers, once every five years. As I stated earlier on a different occasion, the people of India have done their job remarkably well so far. We should have no reason to doubt the collective wisdom of our people."

Lamenting the adversarial approach of succeeding governments towards the policy initiatives of the previous government, including in the states, CJI said, "…foundations meant for long term growth should never be disturbed. All over the world, with the change in government, policies do change. But no sensible, mature, and patriotic government would alter the policies in such a manner which would slow down or halt the growth of its own territory. Unfortunately, we do not come across such sensibility and maturity in India too often, whenever there is a change in government."

Indulging the Indo Americans, particularly the second generation, to think beyond being employees and service providers and adorn the role of employers, Justice Ramana said, "You have already integrated yourself with the American society. It is time now for you people to enter public life and policy making. You can do a lot more for your community and your country United States by winning the faith of your people."

During the event, Justice Ramana was felicitated by the Indo American Associations.