The victim continued to beg release and cry for help while the bride's family tried to coerce him to cooperate, a video clip showed. 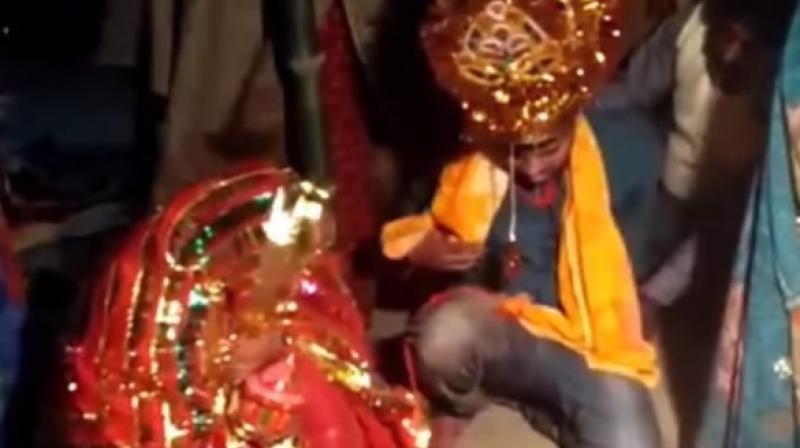 Patna: A 29-year-old junior engineer from Bokaro Steel Plant, was reportedly kidnapped and forced to marry a woman at gunpoint in Bihar.

Video clips from the wedding show Vinod Kumar, the forced groom, being thrashed and compelled to perform wedding rituals in Patna's Pandarak area.

Vinod continued to beg release and cry for help while a group of women, allegedly from the bride's family, tried to coerce him to cooperate, the video showed.

On refusing to apply vermillion to the bride's forehead, her relatives were heard saying, "we are only performing your wedding, not hanging you."

According to local media reports, one of the bride's relatives pointed a pistol at Vinod after they met at a mutual friend's wedding and ordered him to marry her.

In December 2017, when Vinod did not reach home as planned, his brother Sanjay Kumar got in touch with the police and informed them about a phone call from an unknown number that intimated him about his brother's 'pakadua vivah' (forced marriage).

Ever since the incident, Vinod's family has been receiving threat calls to not seek police help and accept the marriage.

"My brother boarded Hatia-Patna express from Bokaro as he had to attend a wedding function near Patna on December 3. Surendra Yadav, the woman's brother, persuaded him to come to Mokama. He was abducted there and taken to Pandarak where my brother was forced to marry the woman," Sanjay said, according to media reports.

The allegations are now being investigated by the police, though Sanjay alleged they had refused to help earlier.

"We asked the boy's family to lodge an abduction case at Mokama because the alleged abduction took place there," he was quoted as saying by the media.

Sanjay then approached Patna Senior Superintendent of Police Manu Maharaj on whose directions Pandarak police freed Vinod from the village where he was kept after the forced marriage.

"We are looking into it and will take action against the culprits. We are also probing the role of the local police," Patna city SP Amarkesh said.

Reports show that the police received nearly 3,000 complaints of groom kidnapping in 2016, none of the which were annulled.