The grenade fell and exploded in the middle of the road, leaving 24 pedestrians and a policeman injured 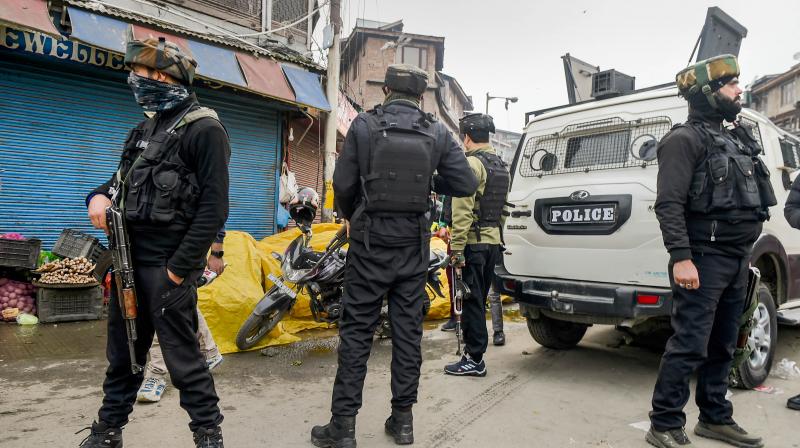 Srinagar: At least, one person was killed and 34 including 18 women and a cop injured in a grenade blast at a busy marketplace in heart of Jammu and Kashmir's summer capital Srinagar on Sunday evening.

The police and witnesses said that unknown person tossed a hand grenade  towards the security personnel at Amira Kadal - Hari Singh High Street axis here at around 4.20 pm. The grenade fell and exploded in the middle of the road, leaving 24 pedestrians and a policeman injured. They were quickly evacuated to nearby medical facilities but one of them identified as Abdus Salaam, a 70-year-old resident of Srinagar's Makhdoom Sahab, Nowhatta locality, succumbed to his injuries, the hospital sources said.

Inspector General of Police (Kashmir range), Vijay Kumar, blamed the incident on separatist militants and said, "We're working hard to identify the person(s) involved in this gory act and smash this terrorist- criminal module also."
He added, "In the light of this act of grenade throwing in the busy Sunday market near Amira Kadal bridge, the police urges all civilians to be vigilant and report any suspected activity to it to thwart the nefarious designs of  terrorists".

Deputy Inspector General (DIG) of Police (Central Kashmir), Sujit Kumar, while talking  to reporters at the site of incident  said, "We've got the CCTV footage and some vital clues have come forward. Though no outfit has claimed responsibility, so far, the police is working on leads to track the attackers". He said that the police will take steps to prevent such attacks at busy places in future. "We will not allow it to become a trend," he said, adding that security was a challenge in entire Kashmir Valley including Srinagar.

The hospital sources, meanwhile, said that a young girl critically wounded in the grenade attack is battling for life at City's Sri Maharaja Hari Singh Hospital whereas the other injured are stable.