An unconfirmed photo showing Dana Majhi with his recently-purchased motorcycle has been trending on the internet. 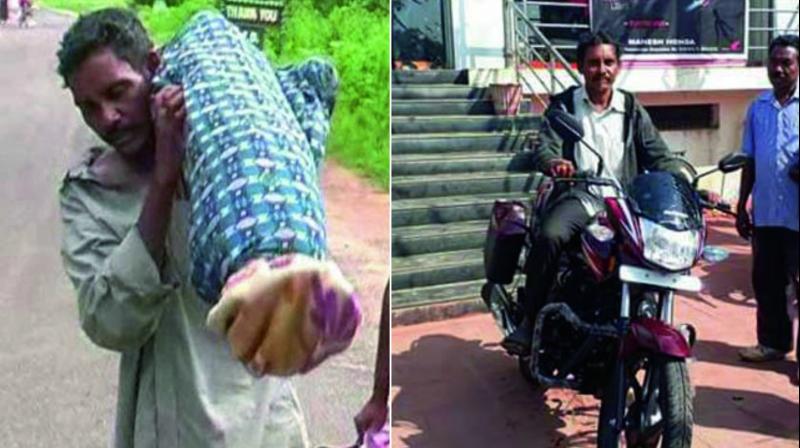 Bhubaneswar: Not so long ago, the image of Dana Majhi, a tribal man of Odisha carrying the corpse of his wife on shoulders for miles, had shaken the conscience of humanity and defamed the state all over the world.

But a recent picture of the ‘poor’ tribal hailing from Kalahandi district reportedly riding a new motorcycle has taken the Internet by storm! An unconfirmed photo showing Dana Majhi with his recently-purchased motorcycle has been trending on the internet.

In 2016, Dana Majhi had grabbed headlines for carrying the corpse of his wife for nearly 10 kms from the hospital after he was denied a mortuary van by the hospital authorities in August 2016. Majhi’s wife, Amang Dei, who was suffering from tuberculosis, had died at a government hospital on August 24 last year. With no other help and money, Dana Majhi carried his wife’s body on his shoulder.

The incident went on to stoke a huge outrage not only in Odisha but also across the country and outside. The Opposition BJP and Congress made it a major poll issue during the Odisha panchayat elections held in February.

In social media platforms like Facebook and Twitter, many people posted two separate photographs – the first one showing Dana Majhi carrying body of his wife and the second one exhibiting his bike ride. In June this year, Dana was in news for marrying Alamati Dei of Damanghati village under Kashipur block in Rayagada district.