India   All India  09 Dec 2021  Was it technical fault, weather or sabotage as chopper took unusual route
India, All India

THE ASIAN AGE. | B. RAVICHANDRAN

On Wednesday the weather was misty in Coonoor from morning and yet this chopper carrying Gen. Rawat was allowed to fly 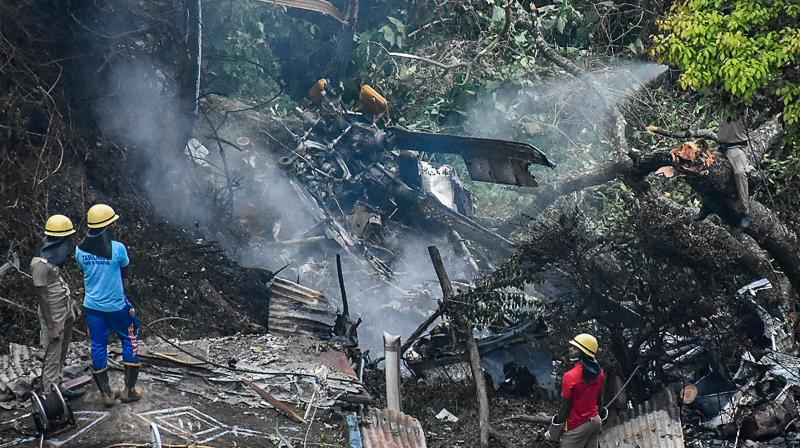 Firemen and rescue workers stand next to the debris of an IAF Mi-17V5 helicopter crash site in Coonoor, Tamil Nadu, on December 8, 2021. - A helicopter carrying India's defence chief General Bipin Rawat crashed, the air force said, with a government minister at the scene saying at least seven people were dead. (Photo by AFP)

Ooty: Was the IAF helicopter crash in a jungle near Coonoor in which Chief of Defence Staff Gen. Bipin Rawat, his wife and 11 others were killed due to a technical fault, bad weather conditions or sabotage?

Havildar R. Suresh Kumar, an ex-serviceman from Coonoor who served at the Madras Regimental Centre, Wellington, and also in Siachen and in Ladakh sectors in Kashmir flying many times on IAF helicopters to supply food to the army camps, said usually when the IAF choppers come to the Army Centre in Wellington, the pilots take the aerial route on the western side of Pakkasuranmalai, west of the Ooty-Coimbatore NH and above Coonoor town, and reach the helipad at the Army Centre.

‘’The army and IAF staff on duty at the helipad usually have to give a green signal for landing.  But, on Wednesday, the IAF chopper, instead of flying above Pakkasauranmalai, took a very unusual aerial route in the valley right above Ooty-Coimbatore NH in the Katteri-Burliar sector sandwiched between Pakkasuranmalai and the wooded Nanjappachathiram slopes. The valley was engulfed in mist. It is puzzling why the pilot took this route and who gave the clearance. No one knows whether the chopper developed any technical snag mid-air,” he added.

Rajesh Kumar James, secretary of Citizens’ Forum of Coonoor, said army choppers flying above Coonoor air space is a common sight. Generally, when VVIPs are scheduled to fly in helicopters to the Nilgiris, weather clearance is a must.  If the weather is misty and not conducive, the VVIPs are asked to travel by road. On Wednesday the weather was misty in Coonoor from morning and yet this chopper carrying Gen. Rawat was allowed to fly.  An Inquiry is needed to know who gave clearance for the chopper to travel in the misty weather. Two other choppers flew to Coonoor limits and went back before the helicopter carrying Gen. Rawat ventured into the aerial space of Nilgiris. The army should clarify whether there was any communication between the pilot and others in the helipad base in Wellington as well as in the IAF aerodrome at Coimbatore to unravel the mystery behind this crash, ‘’ he demanded.