India   All India  10 Apr 2019  Can EC leverage lessons from the social sciences for a more successful ballot?
India, All India

Can EC leverage lessons from the social sciences for a more successful ballot?

Another useful insight that comes from behavioural sciences is that people do pay attention to social norms. 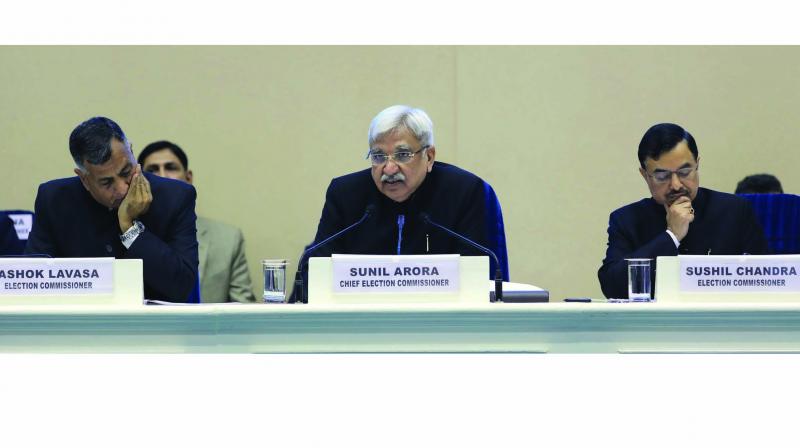 The 2019 national election in India is truly unprecedented in many ways: in terms of the number of eligible voters, grand alliances forged by political parties, their election narratives, regulation on use of social media for election campaigns, expenditures involved and so forth. The elections are unprecedented also because of the massive sensitization campaign being undertaken by the Election Commission of India (ECI) with the aim of ensuring registration of all voters and increasing voter turnout rate. Under its Systematic Voters’ Education and Electoral Participation (SVEEP) initiative, ECI is sensitising the voters to participate in the electoral process. Started in 2010, SVEEP is an important initiative of ECI for educating and building awareness among voters. Perhaps, it was because of SVEEP that the country witnessed a record voter turnout rate of 66.4 per cent in the 2014 general elections.

Although SVEEP is a sophisticated initiative that deploys context specific decentralised approaches/strategies, ECI could do more by using insights from behavioural sciences. As per behavioural scientists, individual decision making is broadly of two types: automatic and reflective. Automatic decision-making is fast, effortless, often based on stereotypes and is prone to biases and heuristics whereas reflective decision-making is slow, effortful, deliberative as it based on well-thought out calculations. This insight tells us that, left to themselves, most voters may simply act automatically when they should be reflective while deciding on whom to vote for.

Making people vote thoughtfully
ECI has the mandate to ensure that voters not only get registered and cast their votes but also to act thoughtfully, and not automatically or under social influence. Could ECI not give specific guidance to voters? It certainly can, beyond merely urging people to exercise their right ethically and wisely. While it’s not within ECI’s remit to list factors that voters could consider while evaluating candidates/parties, it is well within its remit to advocate strategies such as “discuss collectively, act independently” and “make your own decisions” that could motivate the voters to deliberate on issues before casting their vote.

Of course, some civil society members have come together on different platforms to appeal to voters to make informed decisions. However, their appeals are not necessarily neutral and, in any case, have a limited reach. Such initiatives can’t substitute for the reputation, resourcefulness, and reach of the election commission. So, ECI needs to take the lead and do some more on this.

Informing people of the norm
Another useful insight that comes from behavioural sciences is that people do pay attention to social norms. ECI could leverage this fact to improve voter turnout rate. How? The fact that the voting will happen in 7 different phases spread over a period of five weeks or so, ECI could leverage the voter turnout rates observed in the initial phases by urging voters in the subsequent phases to do better.  One could argue, why would an average voter in Punjab that goes to poll in the last (Phase 7) get influenced by the voter turnout rate in Telangana that goes to poll in the first phase (Phase 1)? Yes, it wouldn’t influence. But look at the election schedule in some detail. Three states viz., Bihar, Uttar Pradesh (UP) and West Bengal are part of all the 7 phases in the election schedule and 4 states viz., Jharkhand, Maharashtra, Madhya Pradesh and Odisha are part of 4 (of the 7) phases. Now if voters in one region of UP are informed of the turnout rate in the other part of UP, they are likely to pay heed. The fact that there is some degree of “sociality” between people of a same state, ECI could leverage this fact through appropriate messaging to improve the voter turnout rate. Further, the fact that phasing of elections in each of these states proceeds in a geographically continuum manner, it adds to potency of the “sociality” lever.

That such “sociality” can be harnessed by policy makers to modify people’s behaviours has been shown in a different context. In United Kingdom, for example, tax compliance rates improved significantly when those who hadn’t paid their taxes where reminded through letters of the compliance rate in their regions. Even sending a general reminder that most people in Britain paid their taxes on time still improved tax compliance but not by as much. The more specific and targeted the information, the more effective would it be. The core insight here is that humans being social animals get influenced by what others do. When they are informed of a social norm, most would want to comply with the norm if only they know what the norm is.

Election commission to seize opportunity
Undoubtedly, holding of national elections in India is a mammoth exercise both logistically and the expenditures involved. It’s the world’s largest democratic exercise and this time around it could also be the world’s most expensive elections. If India enjoys the reputation of holding regular, free and fair elections over the years, the credit for it in no small measure goes to ECI. ECI has been fine-turning it’s election strategies over the years. For example, it has recently come up with a mission “leave no voter behind” and is taking significant steps toward achieving this mission. It’s giving a special focus on persons with disabilities for example. It has plans of extending essential facilities like ramps with hand rails, wheel chair facility, tactile signages, Braille facility, volunteers to assist voters with disabilities are being made available at every polling station along with extending transport facility on poll day. It has also roped in community radio stations across the country for contributing to the spread of voter education and awareness.

Using insights from behavioural sciences, ECI could nudge the voters to exercise their right to vote and also to be thoughtful about whom to vote for. Applying these insights is a low-cost intervention that can yield significant gains in the electoral outcomes. Not doing so will be a case of a missed opportunity!

The writer is a development economist, formerly with the Bill & Melinda Gates Foundation and World Bank