The Citizenship (Amendment) Bill, 2019, has triggered protest across Assam, particularly in the Brahmaputra valley. 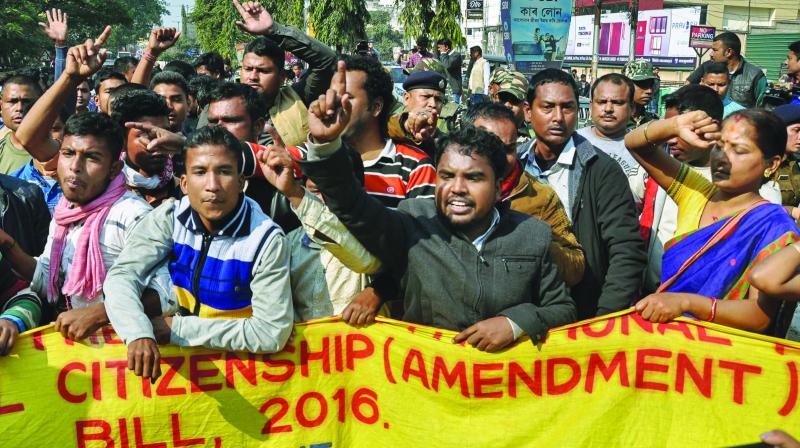 Activists of various indigenous organisations stage a protest rally in front of Assam Secretariat against the Citizenship (Amendment) Bill, 2019, in Guwahati

The outrage in Assam over the passage of the Citizenship (Amendment) Bill, 2019, in Parliament has brought closer arch-rivals Congress and AGP, a former ally of the BJP. Experts say the BJP may also take a hit in LS polls due to the Bill.

Guwahati: Assam’s  first political casualty of the Citizenship (Amendment) Bill, 2019, passed in the Lok Sabha has been the breakdown of the coalition between the BJP and the Asom Gana Parishad (AGP). The decision also led to resignation of three AGP ministers and at least 10 chairmen or directors in various government corporations.

However, the regional party came under flak for not severing ties soon after the announcement by Prime Minister Narendra Modi at a rally at Silchar that the Bill is “atonement for the past mistakes of partition” and the Central government is determined to pass the Bill in Parliament.

The AGP pulling out of the BJP-led coalition is not going to pose any threat to the Sonowal government as the other ally of the saffron Bodoland People’s Front (BPF) announced that it would continue in the government. In the 126-member Assam Assembly, the BJP has 61 members, BPF has 12 members and AGP has 14 members.

Another significant impact of this Bill has been that it has brought the arch rivals Congress and AGP closer. Welcoming the AGP’s decision to break off its alliance with the ruling BJP government, three-time chief minister and Congress leader Tarun Gogoi urged the AGP to set aside differences and join hands “for the sake of the state”.

Mr Gogoi was also seen with his rival Prafulla Mahanta, two-time chief minister and AGP leader, participating in the “Dhikkar Divas” (Condemnation Day) held in the city to protest against the tabling of the Bill.

“I welcome the AGP’s move to break the alliance with the BJP for the sake of the state’s welfare. It’s time that the AGP, Congress and others join hands for the greater Assamese community, leaving aside all our differences. The saffron party has been trying to impose their “Hindutva” ideology in the secular state of Assam and we should not allow it,” Mr Gogoi said.

He accused the BJP of adopting the ideology of Muhammad Ali Jinnah. “Like Jinnah wanted a country for Muslims and India was divided, the BJP wants to create a Hindu country. The nation is at risk. The Bill will affect the state’s socio-economic and demographic pattern adversely,” Mr Gogoi added.

Taking a cue from Mr Gogoi’s remark on Jinnah, Assam finance minister and BJP leaders Himanta Biswa Sarma argued that if the Citizenship Bill is not passed  “we will be surrendering to Jinnah’s policy”. The minister said that people are commenting on the Bill in a “reactionary way” and intellectuals are trying to build a “wrong narrative”, but clarified that he was not pointing to any community.

“Without that Bill, we are surrendering to the philosophy of Jinnah... This is a fight between Jinnah’s legacy and India’s legacy,” argued Mr Sarma.

The Bill has triggered protest across the state, particularly in Brahmaputra valley of Assam. Soon after the Centre announced its plan to pass the Bill, hundreds of protestors have taken to street and registered their opposition to the Bill which, according to them, poses a threat to their language, culture and existence.

The Left-Democratic Manch, Assam of Left and democratic parties, as well as intellectuals, writers, literary and cultural workers are also on the streets under the banner of the “Save Assam Movement”.

The Congress joined the protests and lent support to the bandh with its leaders joining the agitation against the Bill.

If insiders are to be believed, the BJP’s move was aimed at some political calculation to polarise the voters of Eastern Indian, including Assam on religious lines, in the run-up to the 2019 Lok Sabha elections.Insiders say that BJP may face a setback in Assam which has 14 Lok Sabha seats, but the party intends to reap the benefit of the Citizenship Bill more in West Bengal which accounts for 42 Lok Sabha seats.

BJP strategists are of the view that the Bill may create a polarisation among Hindu voters in West Bengal andhelp it win in LS polls.