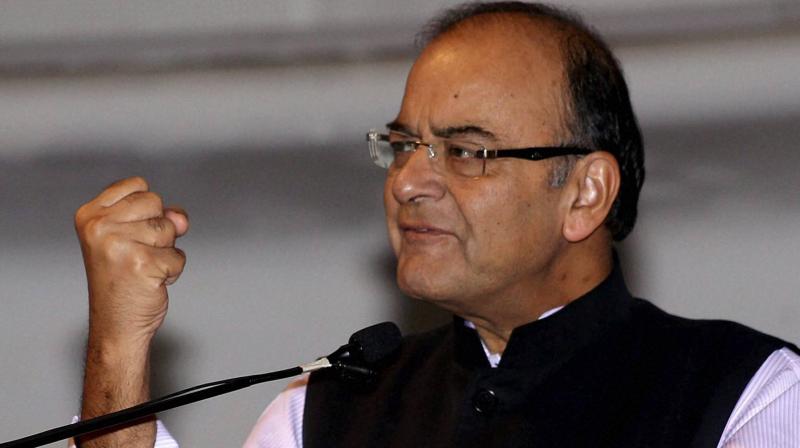 Arun Jaitley while taking a jibe at Rahul Gandhi questioned his wisdom, saying it has to be acquired through learning and cannot be inherited. (Photo: File)

New Delhi: Union minister Arun Jaitley is writing "hollow and wasteful" blogs to regain political relevance, the Congress on Wednesday said, hitting back at the BJP leader for questioning the party's "ideology" and its president Rahul Gandhi's "wisdom".

Congress communications in-charge Randeep Surjewala said Jaitley's blogs are a clear case of finding lost political relevance by "churning unadulterated lies". He alleged that the "minister without a portfolio" is desperately trying to "outwit his juniors" who have surpassed ahead to "impress the Badshah by weaving blatant lies and falsehood".

Earlier, Jaitley while taking a jibe at Gandhi for "anti-Narendra Modi tirade" questioned the Congress president's wisdom, saying it has to be acquired through learning and cannot be inherited.

The Congress party has become "ideology-less" because its "only obsession is a person called Narendra Modi (Prime Minister)", Jaitley said in a Facebook post.

Also Read: Wisdom has to be acquired, can't be inherited: Jaitley takes jibe at Rahul

Surjewala dubbed Jaitley as the "worst" finance minister in India's history who pushed a resilient Indian into an unprecedented financial gloom. The economy under Jaitley has become the biggest NPA (non-performing asset) for the country, he said.

"Myopic memory, selective amnesia and weaving lies have become the characteristic style of Modi government's minister without a portfolio Arun Jaitley. We understand his desperation of seeking political relevance by writing hollow rhetoric, unadulterated falsehood and plain distortion of facts through his hollow blog," the Congress leader said in a statement.

"Has the BJP and Shri Jaitley become agenda-less, achievement-less and argument-less?" he asked.

Instead of worrying about job creation, providing adequate MSP to farmers and national security, the prime minister is busy throwing "fitness challenges" and putting odd videos on social media, while Jaitley is busy writing some hollow blogs, he alleged.

"The Congress wants to remind the Prime Minister and Jaitley that they have ruined this country's economy through their Modinomics + Jaitleynomics, and this country now needs a break from them," Surjewala said.

Jaitley in his blog had earlier said, "For a president of a national party (Congress) not to understand this basic procedure of bank functioning should be a matter of concern to the entire party as also the country."

"In dynastic parties political positions are heritable. Unfortunately wisdom is not heritable. It has to be acquired through learning," he said in a post titled "Is Congress Becoming Ideology-less? Is Anti-Modism its only ideology?"